Electrification is a disruptive technology for fleets, according to BP Pulse, but it can be harnessed in a positive way. 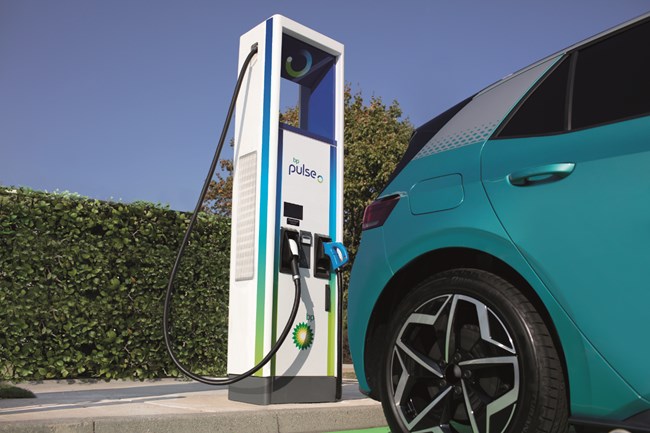 The market for electric vehicles has accelerated in the past two years, spurred on by increased choice and capability of vehicles, as well as being steered by tax incentives.

With improved capability, the charging infrastructure needs to be up to the job, while ensuring users know how to make vehicles and charging network effective for their journeys.

There is clearly a future in battery EVs as the technology has persuaded oil companies to become stakeholders in the charging network - BP being one of them after acquiring Chargemaster in 2018, with the electromobility provider now called BP Pulse.

Mark Bonnor-Moris has spent more than a decade in the sector, originally with Siemens, and then at Chargemaster from 2016, and is now business development director for BP Pulse.

"I've been working with the electromobility sector since 2010," he says. "I've seen how it has grown from the earliest Plugged-in Places scheme to home and public charging on the go, and into fleet charging now, and we have really seen that accelerate during the last couple of years to people electrifying the fleet that delivers their business.

"This is now big, disruptive technology requiring big board level decisions for businesses to make about how they deliver their businesses to customers.

"We've been working closely with a number of big fleets over the last 12-18 months, helping them get their heads around this significant shift. It's a journey on both sides. It's more complicated than filling a car with petrol. It takes longer, and requires
more infrastructure.

As well as making savings compared with refuelling ICE vehicles, as more low-emission zones are introduced with daily use costs, Bonnor-Moris says it could present some businesses with the situation of being unable to afford not to have them.

He says: "The combination of improved choice of vehicles with big policy changes, such as low emission zones in cities gaining impetus, [is] making the cost of not having them very clear, while BIK tax has been very helpful in the acceptance of technology for cars.

The transformation to the present level of infrastructure has been dramatic, with the power and range of many of today's electric cars requiring more energy in a shorter charge time.

Bonnor-Moris says: "There has been massive change from the early days of Plugged-in Places, when it was more about numbers and not so much about utilisation of those charge points.

"We kind of got away with that because there weren't so many vehicles. Now it's completely changed and it's about utilisation. It's very expensive installing the charging technology now, battery capacities are much greater and time has become much more important. How quick and how convenient is it to charge, and will the driver have to wait for a charger to become available."

He suggests that vehicle manufacturers always have to plan for how consumers might be given incentives through regulations and build vehicles that will be compliant, which has resulted in ever greater choice of electric cars with a broad range of price points.

"In a way, Covid-19 has also helped with people getting into the psyche that EVs are more feasible," he says. "There's a technology acceptance curve and we're really moving through that.

"It isn't straightforward. There are many considerations about how you're going to manage that fleet and you need to understand the duty cycle, where the vehicle is parked, where it's going, who's driving it, and I think we've understood from a very early stage that this has three main elements when it comes to charging: depot, home, and on the go.

"They complement each other, and it's very difficult to manage vehicle charging with just one of those elements. A lot of fleets are beginning to understand that. It means providing facilities at the depot, but also providing the means of charging when they're travelling around, as well as charging if they've got [the] ability to park off the road at home.

Bonnor-Moris says many commercial vehicle operations with depots can encounter problems with space and power requirements when it comes to installing charging.

"I think the industry has looked at that and there are some quite interesting technologies around the whole load management area and around the 'dwell time' of the vehicle, and the way BP Pulse positions it is about leveraging our investment in terms of our public infrastructure to reduce the requirement to provide that high level of charging.

"What we're doing in London is developing commercial hubs that businesses can hire space or time at, so there won't be public consumers in the spaces topping up their cars."

But he says there needs to be a blend of different options for businesses to make any transition as easy as possible and make it work for them.

"We include home charge products for fleet drivers, for example. If you're a delivery driver, your vehicle is your business tool - you need it to do your job.

"It's about providing support in those situations, including surveys and installing it, and working out ways of reimbursing them for charging at home.

"It's having the ability to be able to provide different options for different parts of the fleet. We even have to consider geography.

"In London, most professional drivers don't have off-street parking, but in other parts of the UK that's not the case. Some businesses don't have a depot, and the charging is based around plugging in at home.

"We can also provide access to our charging network through the BP fuel and charge card. For other customers, they might need all three elements."

While there has been a surge of interest in electric vehicles among fleet operators, he says most of them will gradually transition from ICE vehicles to electric.

"Most fleets will not have 500 or 1,000 EVs arriving at once, in fact it might not be possible to secure that volume of EVs at once. It will be an incremental process.

"This is such a disruptive technology - but in a positive way - because perhaps the fleets have workshops for maintaining their own vehicles, or they've been using ICE vehicles for decades. Moving to a new technology is a learning curve for a lot of these businesses."