Leasing brokers have a role to play in connecting business drivers to the most appropriate cars. But LeaseLoco claims it can put people in touch with the best deals much more quickly. Simon Harris spoke to CEO John Wilmot. 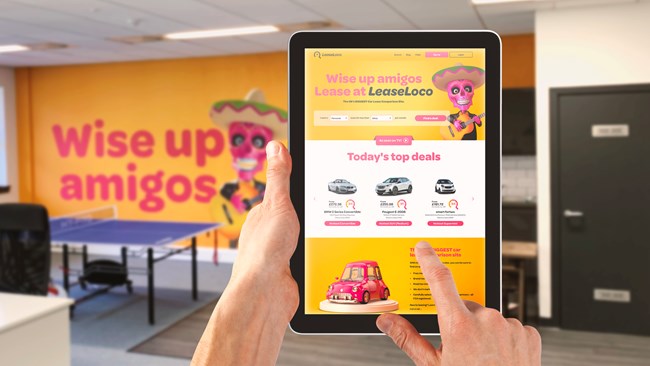 Some start-up businesses identify a need for a product or service, while others have a vision of a better way to deliver an existing product of service. John Wilmot, CEO of leasing comparison site LeaseLoco, falls into the latter category. Just a few years ago he was searching for the best deal on a car lease and became frustrated with the multilayered process of finding what he wanted.

"I was looking for lease deals around five or six years ago," says Wilmot. "I've leased vehicles for six years, and I used one comparison provider and I was a very frustrated consumer.

"Like many people, I wasn't in the market for anything in particular - I just wanted a good deal.

"It really blew my mind how many searches I was having to make. The leasing market can be volatile, so not only was I making those searches on a daily basis looking for better deals, the time consumption was too much.

"I kind of enjoy the research element but I realised most people don't. They just wanted to find a good deal with the minimum of hassle."

Finding a good deal from a leasing broker will be a familiar process to anyone looking at personal lease, but Wilmot says around half of the enquiries LeaseLoco receives are for business leases.

He says the company's vehicle deal sourcing is currently around 85% by brokers, with the rest by dealers.

LeaseLoco currently has 10 staff, three of which have been hired during the pandemic. The company has supported its workforce, remaining as flexible as possible during this time, including supporting a staff member working remotely from Brazil and allowing reduced hours at full pay to a member of staff who had to manage childcare duties.

Wilmot says the company has undergone significant and measurable growth in recent months - perhaps because many people have been based largely at home - and while many of its business enquiries are from SMEs and the self-employed, he does have ambitions to serve a large fleet audience in future.

"Around 48% of the enquiries we receive are business lease enquiries, so pretty much a 50:50 split between consumer and business," says Wilmot.

"But our original aim was to highlight what deals are the best value. Someone seeking a leasing deal, whether it's SME or consumer, or even fleet to some extent, doesn't always know what represents value in the leasing market.

"I came up with the idea of a value scoring concept. I put out a user journey video in 2018 even before I had funding for the product.

"I'm certain that another rival got wind of what we were doing and tried to come out with some form of value score first. It was dreadful. For the consumer, there was no evaluation of mileage or terms, so invariably the best-value deals are low-mileage and over four years.

"But actually it doesn't mean a deal isn't good value with 35,000 miles on the contract. It just means you have to adjust for things like that. We created a pretty smart algorithm for dealing with things like that, and creating a score out of 100.

"We took the 16 to 17-step journey as a consumer down to one. You can look at different brands and models all in the one search without looking at them individually."

Wilmot maintains that the majority of people choosing a car aren't necessarily aligned to one particular brand, but have a set of parameters for fuel efficiency, performance and how it would meet their needs in practical terms.

"We came to market with a product that was uniquely built for that journey," says Wilmot. "Allowing someone to look for something ranked by value that fitted their criteria."

He says that although people working in vehicle sales know the market can be volatile, with fluctuations in residual values and occasional short campaigns of financial support by manufacturers for particular models, the majority of people in the market for new vehicles are unaware of it.

"Most people think that because the list price of a vehicle doesn't change, the lease costs stay the same," says Wilmot. "We can show that prices change from day to day.

"It means that our user journey is a more educated one. Then when people make an enquiry, the quality of that enquiry is better."

Wilmot says it's not easy to measure conversion rates through an aggregator business, but feedback from clients suggests an average of around 15%, with some reporting as high as 22%.

The unusual circumstances of the lockdown period also resulted in some difficult-to-repeat business, with one client reporting 50 sales from 80 enquiries in May.

"Looking at the growth in the volume of enquiries, our business has doubled in size since March," says Wilmot. "A lot of that is down to people moving online, as search volumes increase."

He says quality of service has been important since the business started in 2018, and Wilmot was conscious that it could be counterproductive for it to grow too quickly.

"When we launched, we kept a very tight control on the number of brokers and advertisers we had on the site to 30," says Wilmot. "We got to a point when we were generating too many enquiries for that
group of 30, but we've slowly increased the number of advertisers on the site, and dealers and brokers now approach us to join the platform.

"We have the highest criteria for joining in the industry. We've rejected maybe 70 out of 100 that wanted to join us. We are the first in the industry to have an ethical code of conduct that we require dealers and brokers to formally sign up to."

So what of LeaseLoco's plans for larger deals beyond the few cars SMEs may need to replace at a time?

"We're exploring as a market larger fleet business," says Wilmot. "The difficulty with that at the moment is getting the volume scale discount price.

"But I see a model where a fleet buyer comes along and wants 1,000 Ford Focuses or a large quantity of a particular car. I can see us being able to develop the platform so that we can offer that volume discount.

"We've had discussions with clients on this - if customers are going to take 10 or 20 the rate will adjust based on the volume. Of course, it's a market we want to get into."

But LeaseLoco is not currently in a position to offer volume discounts based on multiple vehicle leases.

Wilmot explains: "At the moment, at an SME in an owner-managed business, a PA or someone is tasked with finding cars to replace three of the directors' vehicles that are up for renewal.

"We do get asked by customers if they take two or three cars whether they would be offered a discount. It's not really up to us. We are the aggregators. That's a question we can put to the client. What we might see is that they will waive the administration fee on the second and third vehicles, but we don't have any influence over that."

Although there was a downturn in demand during March ahead of the coronavirus lockdown, Wilmot says it was short-lived, and the business bounced back during April.

But he sounded a note of caution for anyone who had taken a payment holiday as a result of lost income during the lockdown. He said while finders are relatively happy to delay payments in these circumstances, it might not be possible to obtain fresh credit while those delayed payments are outstanding.

Wilmot is also a fan of electric vehicles, and is looking forward to the brave new world of zero-emission vehicles being encouraged by very low BIK tax.

"I'm a big advocate for EVs," says Wilmot. "I did a video of how you could get a Tesla Model 3 for an effective monthly cost of £315, and worked through the maths of how you can sacrifice a modest amount of salary and put the car through the business. I've tried to be a voice to promote EVs."