Many fleets want to electrify, according to Mobilize Power Solutions, but they need to plan now. 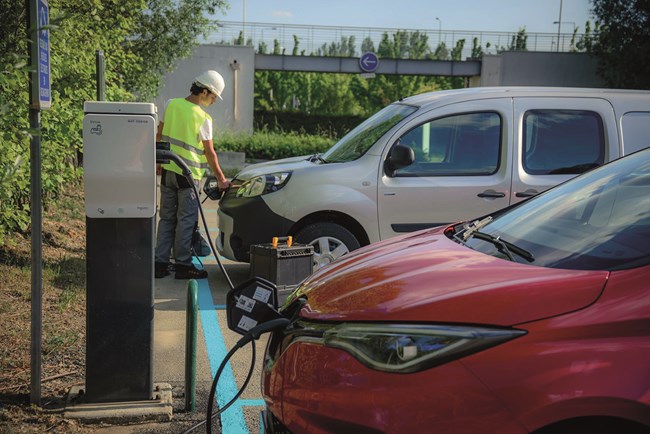 Luca De Meo, CEO of Groupe Renault, announced their EV-based turnaround called 'Renaulution' in January 2021. A key part of this strategy was the launch of the brand Mobilize Power Solutions, bringing together e-mobility, data, energy specific vehicles for ride hailing and car sharing, power, and energy.

Mark Dickens, who has over two decades of experience at Renault UK, most recently as fleet director, was appointed managing director of Mobilize's UK arm in April this year, ahead of its launch in this country this summer.

"The majority of the business is EV charging and infrastructure, as well as fleet analysis. We can go to a fleet, do the analysis and say, this is what you should do, and how you map your strategy. Then we could deal with the supply of the vehicles if we needed to. That doesn't have to be Renault, but obviously being owned by the group, they would like us to do that. We're very much about bringing a solution rather than just trying to sell stuff.

"There are concerns about the cost of changing to EVs as well. We come in and help plan that and make sure they know how to finance it, and how to manage their total cost of ownership (TCO) down, or realise the typical cost of ownership.

"Another significant change is that in the fleet and leasing industry, you'd see a leasing contract for three-years or 60,000 miles. That's the average for a car. We're starting to see companies taking a much longer lease for EVs. If you put the TCO, which is significantly lower than an ICE car, with the whole life costs, it is much, much lower if you spread it out over a longer period of time."

With all the savings over ICE vehicles, plus the looming 2030 ban, Dickens tells us there is plenty of interest in making the switch, but many underestimate the need for early planning.

He says: "Everybody you talk to, they all have an ambition to go electric - but, and this is the big but, most want to do it in two or three year's time. Either when there's more vehicles available or better vehicles. The point really is that most OEMs would start to plan a vehicle coming into the market three to five-years in advance. The vast number of EVs that are coming to market now weren't planned last year because of the lockdowns or anything else. This is really important, because getting an electric vehicle charging infrastructure is not fast.

"If you're thinking about electrifying a fleet next year, you need the charging infrastructure to start right now. EV charging is very different - you're dealing with planning, sometimes you're dealing with landlords who might have a great relationship with the business that's paying his rent, but doesn't necessarily want to give you a licence to alter their land. Plus, you're dealing with power supply companies. There's no problem with the National Grid, it's about the local District Network Operators (DNO) and how they how they manage the energy supplies into these businesses.

"Sometimes, we deal with somebody who's really fast and cheap. At the other end of the scale, you've got people that will quote you three-years to get a supply and a £1.3 million cost to do it.

"We've got a very different barometer on the local power supplies going to businesses. If you're power constrained, we do have solutions for that too. But all of it takes time to get in - it's not like supplying a car. You can't just turn up and start fitting EV infrastructure."

Dickens says his message to customers is to get the infrastructure in place now, as in two year's time, the demand could be too great.

He continues: "So, the choice of vehicle is there. Is it just having the infrastructure and planning ahead to make the most of this? We've worked with one company on the high street, and they just expected us to put chargers on the walls outside their retail shops. You can't just do that. So, we're advising and guiding businesses in what they can and can't do, plus what they shouldn't do.

"You can't plan for everything as we found out last year, but from our point of view, we have a vision of the kind of EVs that are coming to market in the future. If you're putting in EV charging infrastructure today, you don't want to be coming back to it in two-year's time, to put in a new one. That's our advantage really because we're aligned with an OEM, we get a clear vision of what is coming to market. That's not just in the Renault Group, as all the manufacturers share technology and ideas.

"I think people have to realise, a bit like cars, when you put this infrastructure in, it's not forever - there is a lifespan to it. We're currently working on bringing a leasing product to the market, that will help customers with the financing of their EV infrastructure. So, like a car, a client can get theirs renewed in five, six or seven-years' time - depending on the infrastructure."

Dickens tells us Mobilize's current work is a mixture of planning and putting an infrastructure in place.

"It's a whole mix," he says. "At one end you've got the large corporate fleet, where they want to advice to plan. Looking at fleet analysis, taking their in-life use of the fleet, then mapping out what they could do on electrification. Not all vehicles are suitable - this isn't one size fits all, it is different for different people.

"For our EV charging infrastructure, we do installations for car, van, heavy truck and bus. It covers quite a wide field if you like, but the actual fleet planning side of it is one area.

"Then you've got the businesses that say, I just want fast chargers. Then, when you visit the site, understand what it is they are doing and quite often end up talking them out of that. We're also brand agnostic from a charger perspective. We will only ever suggest a choice of hardware that fits with our global framework agreements. So, anything and everything we supply goes through rigorous testing at our techno centre in Paris to make sure that it is ZE Ready.

"ZE Ready is an accreditation process from Renault. What it does is make sure that the charging infrastructure is capable of the customers charging needs. Not all chargers are. We will only ever supply the products that work and have gone through technical, quality and performance accreditation.

"We give the customer a choice and that's what fits. We're a solutions partner, rather than selling particular charge points. Everybody's user case is different, a lot of people need to be guided on that.