Flexible car subscription firm Mycardirect launched in September 2020, Martyn Collins speaks to CEO Duncan Chumley about the past year of business and his future plans. 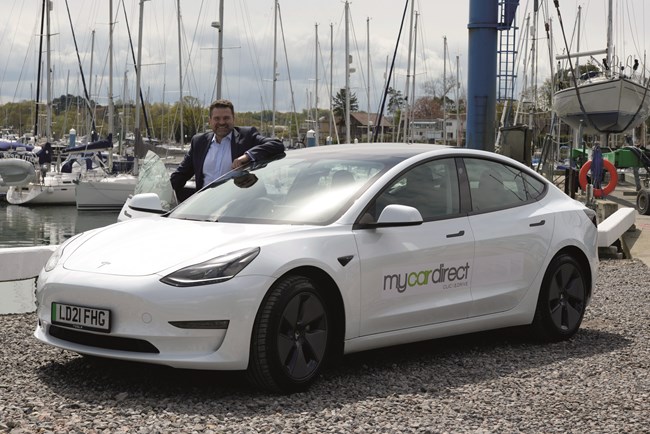 Duncan Chumley describes 2021 as an "interesting year for a variety of reasons". Mainly around Covid-19, world car supply and the acceleration in transition to electric vehicles. "All of which you could argue have had a positive effect on our business," he says.

Further conversations around car subscription, he finds, are also helping. "More people are starting to talk about it, whether it's because of manufacturers or other companies getting involved - it is certainly firing up the market in a positive way. People are looking more and more at subscription as an alternative to personal leasing and maybe to a new or used car.

"All of this, and we've seen continued growth of our fleet, by 10-20% per month. So, 2021 was a really positive year for Mycardirect in that sense."

One thing that Chumley found, but wasn't expecting about 2021 on such a scale, was the acceleration of EVs. "The fact that well over 20% of our fleet is EV, demonstrates that we fit well within that sector, offering customers looking to make the transition the chance to try, as maybe they don't want to commit to four-years or three-years without really understanding what these vehicles are. They might also want the flexibility to move with the times, because as we all know electric vehicles are only starting out on their journey with a long way to go. In four-year's time, the range on some of the vehicles will be significantly different to what they are today."

He admits he's been asked many times who is Mycardirect's customer base and demographic since launch. Plus, whether they should be focussing on the personal rather than business sectors. "What we've found, and I know it's very generic, but we've appealed to a cross section of the market. I would say on average, looking at our demographic, our customers are people aged between 30 and 45. They are either customers who've bought used cars in the past, or people that have been on leases and come out of company car schemes. That's a very generic look, however, as I've got a customer aged 82 and a customer aged 18.

"We've found that interest in electric vehicles is very strong, and I'd say we've specialised a bit more in prestige. That said, we've also done very well with SUV, following the market.

"Around 45% of our customers are based in London. Our head office is in Hemel Hempstead, so you could argue that our closest population area is London. But I also believe a lot of early technology adopters are based there, and London fits very well with EVs - especially if you pay the congestion charge. Then there's the ability to be flexible - depending on your location. I think in a city you'll find people like that flexibility more - as they might not be sure if they will need a car for just a few months or much longer.

He has also seen the business expand into sectors that he didn't have outlined in the beginning. "Where travel has reopened, I'm working with several organisations such as the British Chamber of Commerce, across countries such as Singapore and Dubai. We have customers coming over for up to six-months to work in the UK, or maybe have dual-residency and subscription has worked really well for them. I've got a client that's just gone back to Australia for three-months - he's coming back in March. He thinks it's brilliant, as he doesn't have to pay virtually £2,000 a month to store a car in the UK. It gives him the flexibility that he's looking for, without some of the costs of long-term rental.

"EV has been the strongest area of growth - everything we've had come in has been snapped up, and that's not just from private individuals - that's corporate as well. We've seen a lot of growth in corporate customers where they want to enter the EV space and probably are unsure how it will work or look like, and this gives them the flexibility to do that."

We're in the grip of a semiconductor crisis - has this affected business, we ask? "It has affected us in two ways. One in a positive way, because people have looked at alternatives to waiting for a new car and they've shopped around. For us, it's opened the market a bit more as people often opt for the easiest solution. If stock was freely available, they would have carried on that way. We've had lots of customers that have come into us, saying they've ordered a car, it's not here for six or 12 months - is there anything we can do? We have options on a variety of cars, as we've pre-ordered quite a lot of stock. So, whilst the availability on all cars isn't there, we have supplied customers with cars.

"The main thing I want to do is get subscription on these people's radar, for them to consider it as an option now and in the future. We're currently doing 30% business and 70% private. But some of these private customers are business leaders. I think we appeal for two reasons - they might have moved roles and need a car, but perhaps with different demands.

"Then, there are those who have asked themselves if they want to be in a company car at this stage - but might also want to try an EV. I think our customers want to learn that experience for themselves - because it's not all great. Some have gone on to order cars, some have opted to stay with us. So, it's that conversation we're having with customers, that subscription gives you ability and flexibility that you don't have to lock your fleet in for four-years.

"22% of our business is now in EVs and I think, based on my order bank for this year, I'd expect that to rise to about 30%. SUV is still our heartland and we tend to follow what the retail customers are demanding, and SUV has been a very strong sales point."

Chumley's future plans revolve around growing the business. "We're less restricted by supply because we run our cars up to two-years. So, as new cars come on, we also have our existing fleet. We're quite lucky being a new business, as my fleet's building all the time, with less de-fleets.

"I've got plans to open more sites, we have a reasonable customer base in Scotland, which we've seen grow and we'd like to look at how we can service that better and continue to organically grow the business, really.

"As with all methods of sourcing vehicles, car subscription won't work for everyone, or every business - but it's in the mix to give more choice to consumers and businesses."