In Focus: The AI Corporation

We may be familiar with anti-fraud technology in our personal banking, but how are the same techniques applied to the fuel card sector? Simon Harris asks the AI Corporation's Dr Mark Goldspink. 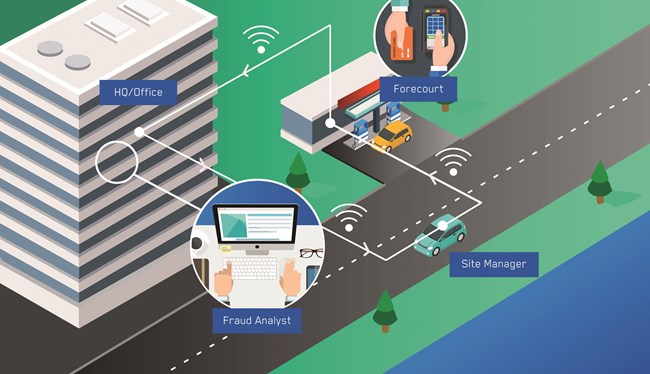 Many of us have experienced frozen bank cards that are caused by suspected fraud. Attempting to pay for something online fails and eventually it's resolved after contacting the bank.

But similar technology is also applied to fuel card transactions, so businesses can be alerted when suspected fraud occurs and appropriate action can be taken.

You might be surprised to learn that the driver behind this is machine learning and artificial intelligence, backed up by human decision-making when a more nuanced assessment is required.

The AI Corporation is one such organisation applying these techniques from the world of finance to the fuel card sector, supplying fuel card providers with a sophisticated safety net that can be used to warn their customers.

The company is led by CEO Dr Mark Goldspink, who has more than 20 years' experience working in fuel and payments. After graduating from London University with a PhD in chemistry, he worked for multinational oil company Texaco for 12 years, mainly involved in forecourt retailing.

In 2000, he moved to an internet billing company and in 2005 became managing director for Retail Decision's global payments and fraud division. In 2010, he moved to Logica (bought by CGI Inc in 2012) and was vice-president responsible for managing Shell's outsourced payment contracts - worth more than half a billion dollars. He joined AI in 2013 to work with Ashley Head on developing and expanding a whole series of interrelated payment businesses globally.

"Your employees should treat the fuel cards as they would their own cards," says Goldspink.

"Fleet operators need to know where they are and how they're managed. It's a bit more difficult in the commercial world when the cards are in the hands of many drivers. But with any card used as a payment card, they should be treated like they're cash. It isn't always easy, but this is what businesses that use them should be aspiring to."

Goldspink confirms that the fraud detection technology possible for fuel cards was developed for banking.

"A lot of the systems we deploy in the fuel sector are bank systems," he says. "There are certain parts of the world where banks issue fuel cards themselves, such as in South Africa.

"So they are used in line with banking standards and are high-spec. All of us have had some kind of contact from our banks to check if we've made a transaction that looks suspicious.

"We use a whole series of different methods of checking whether fraud is being perpetrated. Of course in this model the end user is a B2B customer rather than B2C, but the process is pretty much the same."

Shell published research from a survey a few years ago that confirmed that fuel card fraud was high on a list of worries for fleet managers whose businesses used them, so the fact that new technology is now being fed into the sector should offer a great deal of reassurance.

But the fuel card market isn't quite the same as banking, and Goldspink is happy to outline some of the differences and the specific advantages of having them included by a fuel card provider.

"One of the differences [with banking] is that in the fuel sector much more data is available," says Goldspink.

"You've got all the mileage information and different fuel products. The data sources tend to be a bit richer than in traditional bank cards. Of course, this is also changing in the banking sector and more information will be available in that area in future."

In Goldspink's experience, he says in terms of the richness of the data available from transactions, the banking sector is at the lower end of the spectrum, whereas the internet is at the opposite end. He says that fuel cards are somewhere in the middle.

"What we can do with that information is apply algorithms and clever machine learning," says Goldspink. "And what those systems are doing is looking for a fraud signal. Once we spot it we aim to make a decision, some can be made quickly in the case of obvious fraud. Others need some kind of review and we have people who look at these alerts."

He adds that the human element is currently important in incidents that need reviewing to decide whether the alert has been caused by a genuine fraud incident.

"But what it means is that as the machines can pick up and decide on the simpler incidents, the team of experts can look at the less obvious cases in more detail," says Goldspink.

Speed can often be critical when fraud is detected in terms of preventing repetition with the same source, and Goldspink says the target when reviewing an incident at the human level is to make a decision within 30 minutes, but it can depend on the complexity of the case.

He says: "The problem with the human is keeping the energy levels high. You can often imagine that by Friday afternoon, people might not be entirely focused on the job in hand, the issue for managing this by human intervention is keeping a constant decision-making process, and that's why we're increasingly seeing machines becoming part of that process to deliver greater consistency.

"We want to avoid the 'saw-tooth' effect. We are human; we get tired, so it's understandable that this happens. We can't constantly apply the same process as humans, despite trying."

He says despite competition in the fuel and banking sectors, the detection and eradication of fraud is a non-competitive element, and all businesses working in the sectors have the same broad aims.

"Fraud is non-competitive as far as the industry is concerned, people have to work together to stamp it out. And trying to get a consistent benchmark isn't always easy, because some of our clients will operate in different territories."

He also says as well as detecting and highlighting fraud, the technology also picks up patterns of best practice.

"I've been working in fraud detection for a long time," says Goldspink, "And if you're doing fraud prevention really well, I would argue that within your organisation you have extremely rich data sources to be able to identify and act on it.

"You need as many data sources as possible to understand that signal and augment it. We are screening through millions of transactions to look for fraud, but it's easier to find good behaviour rather than looking for bad.

"The signals for bad behaviour are still very small and there are a lot of 'good' customers around. Being able to identify those good attributes, whether it's attrition rates, wallet usage, pricing, and other things we can turn AI into looking at too.

"Anything that has a use case where there's a lot of information, and a signal that can be identified, we can turn that into a decision to our customers. So it's an exciting area where we can push the use case of the technology beyond fraud.

"What we're trying to do for our customers is to give an insight in real time and highlight any behaviour changes. With so many transactions, it's impossible for humans to monitor all of them."