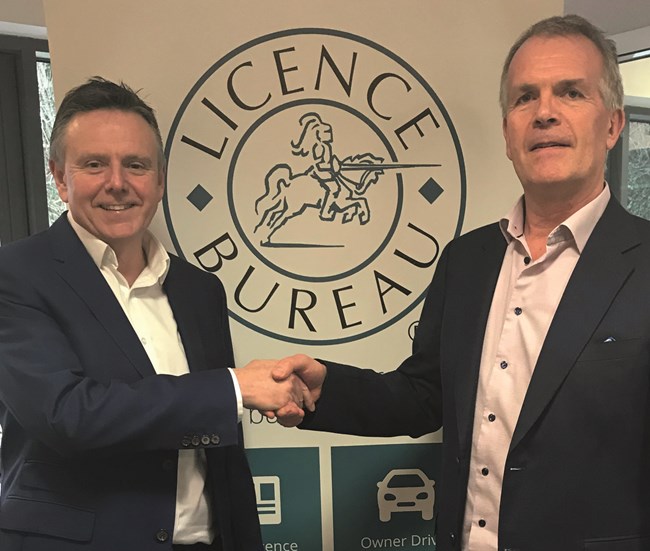 Many of you involved with checking the validity of employee driving licences will have probably heard of Licence Bureau, which is one of the companies that deals with fleet compliance relating to vehicles.

The company was established in 2003, and has witnessed the process of driving licence checks being transformed in that time, with technology increasing the speed and capacity.

But according to Malcolm Maycock, former managing director of Licence Bureau, and now senior advisor as part of TTC Group, the rate of change has been phenomenal.

"We've moved away from sending off a piece of paper and getting a piece of paper back within 30 days to having clients sign into a portal, entering a name, and within a second of hitting a button an email is sent to a driver who can enter their details, and within minutes those results are in the client's portal having been through the DVLA," he says.

Jim Kirkwood, managing director of TTC Group, joined the company in November 2016, but he has a long career in risk management.

In 2017, investor Palatine Private Equity backed a management buyout at TTC Group, led by Kirkwood. Since this, the firm says it has seen revenue growth of more than 36%.

"Before I joined TTC Group, I ran Drivetech [formerly AA Drivetech] for 12 years," he says. "And then I led a management buyout at TTC.

"TTC Group's business had two elements to it: it had a police business largely focused on speed awareness training, and a couple of cycling businesses, largely local authority-based and mainly focused on training children.

"With what I'd done at Drivetech for many years, we had grown a sizable corporate business, something that TTC didn't have. We recognised there was an opportunity to do that here.

"I always knew that Malcolm's business at Licence Bureau was significantly larger than what we had. We'd had a number of conversations about it.

"If you look at Licence Bureau and TTC, there is a slight overlap in products and services, but actually the real benefit here is from a TTC perspective we didn't have a particularly strong compliance-led business, and bringing Licence Bureau into the fold, with a scale and size, that dwarfs anything we had done so far.

"We had been developing products and services, driver risk assessments and all the training programmes we do online, in-vehicle and workshop-based, but we had also begun to work using telematics data and using the information to better educate and inform the training community so training could become more personalised.

"With ongoing customer monitoring and tracking, they can see how these interventions work. Putting all that together, Licence Bureau was an important acquisition for us, and we're moving to establish the group as a player in the risk management marketplace in the UK."

Kirkwood says the market has witnessed too little change over a long period, and believes TTC's plans will have an impact.

"There's been very little innovation in this market for many years," he says, "And one of the things I'm keen to do is bring innovation to the market, not only with the more functional products and services we can offer, but our ability to deliver that in different ways and to create content that's interesting and enthuses and brings people into the fold, rather than the more traditional forms of training that have been brought into the market over many years.

"In the short term the business Malcolm has built gives us the opportunity to continue that growth. Licence Bureau is well established and has a great reputation. It's a great lead generator for the business. Now we've got that, and the additional products and services we've introduced to date.

"One of the interesting areas for us is we're developing partnerships and relationships in the data space where we're bringing together companies that will work with us, providing content to end users where you can better analyse and educate drivers in-vehicle.

"You're then able to provide a better return on investment for customers. I'm hoping soon we'll be going to the market with an even broader proposition than we're talking about today."

The spectre of corporate manslaughter, and company directors appearing in the dock for failings in fleet compliance, has been around for a couple of decades, and it has been a catalyst for many fleet operators to outsource to specialist organisations.

But Maycock believes this element of the business is still relatively untapped when calculating the number of business vehicles on the roads.

"I'm really surprised we're getting large corporates on board who have been doing it in-house," he says. "And after some incident that makes them take a view right across their businesses, they've discovered they have massive gaps.

"If you're a multinational company you're split into sectors and those are split into different depots. The control, unless you manage compliance centrally, is split around the business.

"An organisation would do that with health and safety, but often not with compliance. It's done locally.

"There are tools out there to help with compliance and purchasing, but it's rarely seen as a big-ticket factor. It's done separately at every branch.

"At the end of March we had reached 750,000 checks in the year. The DVLA runs from April to March. We're looking at the million target for the forthcoming year and we're still only scratching the surface. There are 300,000 lorry drivers, probably the same number of bus drivers, and around 900,000 company car drivers. With maybe 13 million grey fleet drivers, we're not anywhere near the limit."

Kirkwood says the Covid-19 crisis has affected the business, but in certain areas, such as product development, the company has not furloughed staff. It's his ambition to tailor products and services even further.

"We're looking at micro-training, how to break things down into short training sessions where it works for the delegate," he says. "Even through Covid-19 we are continuing to invest in our business.

"We've had to take account of right-sizing considerable parts of the business that have been affected. For example, our cycling business has undergone furloughing because the schools were closed.

"Equally, there are parts of our business that are running pretty much as normal. We're continuing on the police areas of our business, we've moved to online training from venue-based training. Drivers have been able to do this from the comfort of their own living rooms.

"The key thing in all of this has been maintaining a good level of communication with the team so everybody knows what we're doing."

Kirkwood adds that employers are more open to discussing risk management issues now than in the past, and are often aware of the consequences of ignoring it.

"One of the things we're seeing is a greater number of businesses are becoming more aware of some of the key areas of duty of care.

"In the early days, back when I started at Drivetech and Malcolm started Licence Bureau, it sometimes felt like pushing water uphill.

"But what's happened over the last few years is compliance and organisations wanting to make sure anyone driving on their behalf is legal. Companies have become more aware of reputational risk, and being able to deliver products with online capability has made it easier to attract new customers."