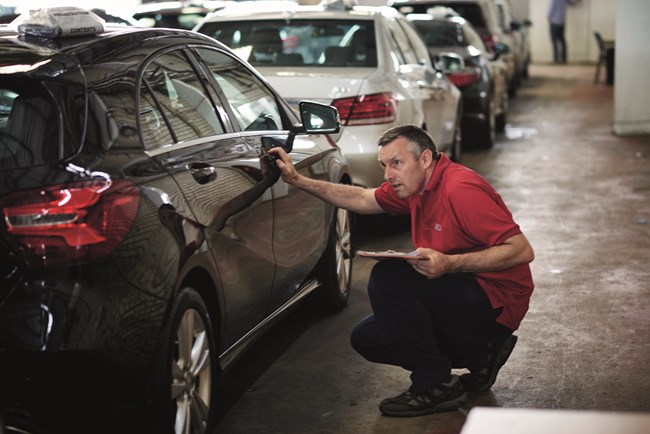 There is a spectrum to refurbishing used cars. At one end are those who hand over the keys to something utterly pristine that, as we have often discussed in these pages, will more than likely fly through auction with no shortage of bids.

At the other are owners or lessors who just want shot of the thing - never mind the state of it. That was fine during summer, when demand for used cars was such that even old, ropey ones were going for serious money - not so much when the market is anything but strong.

The problem with both of those methods is the expense. Unless a vehicle has remained unspoiled throughout its working life, buffing it to concours standard can be a big-ticket affair. Equally, a car in need of serious repairs or missing crucial items will always suffer on price and desirability - if anyone wants it at all.

The remarketing industry knows this, and some auction companies have begun habitually preparing vehicles to established levels - not perfect, but recognisably better than they were. Tactical refurbs, if you like, give the cars a much better chance of selling - both for more money and faster - without the cost of preparing them to an immaculate condition.

The levels themselves are based on the National Association of Motor Auction's (NAMA) grading system, which spans 'A' or 'one' for vehicles with nothing more than minor issues to 'E' or 'five' for those in need of more than two major repairs. NAMA reckons that around 90% of vehicles rolling through UK auction halls are subject to it.

Aston Barclay is among the auction houses that has adopted the practice with gusto. Managing director Martin Potter explains how it works in practice: "We've found that, with grades one to three, almost every buyer in the country is prepared to bid quite strongly on them; it's the fours and fives that are the things that we tend to get our vendors to invest in, because there's a significant difference in the residual value achieved at between grade three and grade four."

Potter estimates that there is roughly a 4-6% jump between the price auction buyers will pay for a grade three car compared with an equivalent grade four - and that is precisely where the small amount of work literally pays for itself and some.

"Say, for argument's sake, there's a 4% difference between a grade three car and a grade four," he continues, "we will give them [sellers] a Cap [valuation] performance based on the grades of every single car coming to the sale and all the cars that were in that grade, so they can use it as a benchmark.

"We say, 'why don't you invest the equivalent of 2% of Cap into the car?'. That way, you get a twofold return on your investment, and you're now moving it into a bracket where 100% of the buyer base is going to be prepared to bid on it."

BCA's COO for UK remarketing, Stuart Pearson, agrees that it is a worthwhile move: "To optimise the defleet and remarketing process. insight into condition, preparation, documentation and valuation will ensure vehicles are sold in the shortest possible time for the best possible value.

"Vehicles that are sensibly prepared and accurately valued for sale demonstrate an appreciable improvement in sales performance. Conversion rates improve, meaning the average time to sale is reduced and holding costs are decreased."

Tactical refurbishment has gained so much traction that it has transcended its auction company genesis and is now actively requested by leasing companies and incorporated into their remarketing strategies.

"We know that a big car supermarket will only look at a certain range of vehicles," says Kevin Bicknell, Ogilvie Fleet's remarketing manager, "it's different when there's low stock, but they're currently looking at ones, twos and threes predominantly, and we always try to bring our cars into that range."

He concedes that it is not always possible to drag cars out of the doldrums of poor condition, as some are so far gone that the economic case is stacked against them. Fleets should pay attention here because, at least in Ogilvie's case, that is apparently when damage charges come your way.

"Sometimes you just can't," continues Bicknell, "sometimes the cars, unfortunately, have gone past the stage where a small amount of refurb will sort them out and it'll be quite costly
to get them to a grade three or a C, for example. So, we hold those back and look at the recharge."

He adds that, with some forms of damage, the company almost plays broker between the lessee and the auction company, to establish the cost of larger repairs and offer clients the option of paying for them or selling the car as it is.

"If there's a car that's returned with, say, quite big panel damage, we would get an estimate to get that panel up to scratch. We'd then go back to the driver and say, 'look, to get that panel repaired is going to cost you X'. If they authorise it, then we'll go straight to the auction house and say 'go ahead and do it'. It will then be repaired to a standard that is good enough for the auction houses, and that's good enough for us."

The strength of the market for what the trade terms 'ready-to-retail' vehicles - those that need nothing more than a hose down and a vacuum before they hit the forecourt - has led Ogilvie to get more intricate about its preparation. Beyond the now common practice of pulling cars into the relatively broad grade three-plus bracket, Bicknell says the company has begun scrutinising minor refurbishments within the top three condition levels.

"We've just started working with them [an auction company] to include the grade changes from a C to a B, or a B to an A, because it might just be something small - like getting one alloy wheel repaired or something like that - so for an extra £150 or whatever it is, that brings it up to a grade A or a one, which makes a huge difference."

Despite the ubiquity of NAMA grading, the system is not without its flaws. Some auction companies have previously told Business Car that it is prone to subjectivity, and that a vehicle's grade can vary between companies, assessors and even auction sites within the same group.

Speaking in 2019, seven years after the grading system's introduction, Graham Howes, commercial director of CD Auction Group, said, "We still get feedback that a grade A in one site can be a grade B somewhere else - and it could even be a grade C, so the application of it is still a problem, but the need to have it is becoming more prevalent."

The organisation has also come under fire for limiting the application of grading to auction companies with physical sites, effectively excluding online-only sellers from the practice, a move one auction company described to Business Car as 'absolutely bizarre'. Even with the massive swing to online sales throughout the pandemic, it has stuck to its guns.

"Grading is still limited to the NAMA members who would normally have a physical presence," says head of NAMA, Louise Wallis, "this is continually being reviewed particularly in view of the current circumstances and the development of vehicle auctions."

In its defence, the organisation launched a series of refresher courses for vehicle assessors with a self-auditing process for auction companies using the scheme, in the name of rendering grades more consistent.

Imperfect or not, the system is well ensconced in the remarketing sector, and has become an obvious barometer for buyers of ex-fleet cars and, where appropriate, low-cost tactical refurbishments clearly work well. Those not yet applying them would do well to have a chat with their remarketing department.