Jack Carfrae asks how the used car market is treating the two major fuel types and how they stack up against hybrid and plug-in cars second-hand. 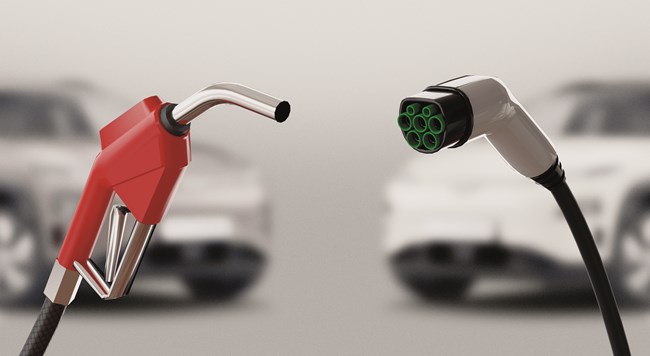 According to Cap HPI, diesels accounted for 47% of used car transactions in 2020, so they are clearly far more popular second-hand than they are new. A big part of that is just the mix of available vehicles - whatever sold well in the past will always linger - but it is also because used car buyers, at least for now, are content with diesels.

Forget the 2030 sales ban, emissions scandals, tax incentives and all the other reasons new buyers are going electric - one glance at BCA's average sales by fuel type graph explains why both diesel and petrol cars are still big business second-hand: they're cheap. Average selling prices of more than £25,000 and £15,000 for battery-electric and hybrids (BCA has one category for both conventional and plug-in hybrids called petrol/electric) is very expensive compared with four figures for conventional internal combustion-engined cars, which is why the latter group is doing just fine, thank you very much.

"While it is tempting to suggest that it is all change in the used car market, with diesels out of favour and huge rush towards alternatively fuelled vehicles, the reality is that the market was very steady for all fuel types over the past year," says Stuart Pearson, BCA's COO for UK remarketing.

The mix of second-hand cars is still predominantly old-school fuel types - far more so than in the new car market. Cap's data says hybrids made up 2.3% of used car transactions in 2020 and electrics less than 1%, leaving petrol with 50%. Incidentally, both petrol and diesel values were up 2.3% in January 2021, while anything electric or hybrid was down between 3.4% and 10.1%, the latter figure being conventional, non-plug-in hybrids.

Even when the number of alternative fuel cars increases, they are going to have to get cheaper to sway buyers. "If you've got equivalent electric or hybrid and petrol vehicles, that premium has got to get down to a more realistic level before you've got parity," says Cap's head of valuations, Derren Martin, "it's got to be two or three, maybe four grand above the petrol. People just aren't prepared to pay these prices, particularly with everything going on at the moment."

Take a step back from the figures and it is even easier to comprehend why internal combustion-engined used cars, diesel in particular, are holding up well. Before the pandemic, we were all gearing up for a barrage of inner-city clean air zones, many of which have been delayed and some, at least in Leeds's case, have been scrapped entirely. Even before then, buyers in rural areas weren't put off by diesel, and it remains a sage choice for larger cars, as Martin explains.

"We spoke to somebody at a car supermarket in Cheshire and they said, in their local area, diesel is still really sought after. Big SUVs have been quite popular in the last year and people still want a diesel in those sorts of vehicles. It is quite dependent on the car, but the bigger you get, the more acceptable diesel becomes.

"I also think there's a bit of a comfort blanket around petrol and diesel to a certain extent. People think 'I can get a petrol car for this much, we're in a global pandemic, so I'm going to stick with what I know'."

The consensus among residual value specialists is that electric and hybrid vehicle prices will trickle down to more realistic levels as they become more prolific on the market. It's pretty basic used car economics, as Cazana's director of insight, Rupert Pontin, explains: "The average residual percentage of cost new for EVs sits higher than it does for hybrid - which is second - then you have petrol, and then diesel very, very close together.

"That will change because, at the moment, one of the reasons that average percentage of original cost new is so high is because there aren't that many vehicles in the marketplace. So what we expect to see is that popularity value - which is a result of the rarity - start to diminish." 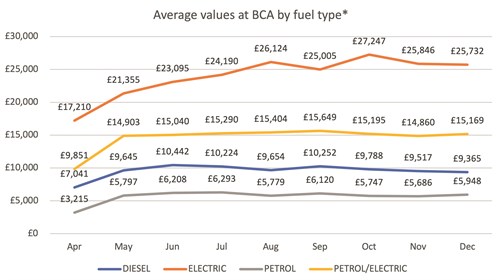 Diesel cars are the complete opposite. While there is hardly a paucity of examples in the used car market at present, the reduction in new sales during the past five years will become apparent in time. To employ another bit of basic used car economics, scarcity has never done values any harm.

"I actually think that the residual value performance for diesels will get stronger, because the demand for the cars will still be there," adds Pontin, "in the next six months to a year, we are going to start to see a perceived shortage of diesel product in relation to demand. As a result, pricing and residual values will get stronger, and for those people who still register a new diesel car, they are going to make more money than people expected [when they sell it]."

That trend is broadly expected to continue as the 2030 internal combustion diesel ban approaches. Assuming the appetite for second-hand petrol and diesel cars remains - and it doesn't exactly look as though it is drying up - decreasing availability will likely play into the hands of sellers as the decade rolls on. In short, it's old-school supply and demand.

The same cannot be said about every plug-in car destined for a used forecourt, especially battery-electric examples. These days, residual value setters are generally much more positive about second-hand EVs than they were a decade ago, when the vehicles were largely unproven and they were reticent to take a punt on likely values. However, some now believe the used EV market is effectively splitting in two, and it comes down to range.

Battery-electric cars with a relatively limited range - think official manufacturer figures of less than 150 miles, which almost always means less in real life - are becoming less desirable and suffering heavier depreciation because, quite simply, you can buy something else with a better range.

"In the previous year, we had a batch of Nissan Leafs and some [Renault] Zoes and. being brutal, nobody wants to buy them. On the other hand, Teslas outperform against Cap."

The trend - as it always has been with electric cars - is partly psychological. Used buyers are just as swayed by the idea of a range comparable with a full tank of fuel as new customers, even if, in reality, they barely ever use it - but that nonetheless elevates the worth of something capable of 250-300 miles on a single charge.

Teslas are the most obvious example, as Pontin explains: "That car, when it starts to come back into the marketplace in two to three years, will probably be residually strong, because it's got that critical mileage.

"If you then take, as another example, a Vauxhall Corsa-e - where they quote a mileage of 200 but most people are reporting it at about 120 to 140 miles - when that car comes back to the marketplace in two years, it will have been superseded by something with a much better battery capability.

"There are two stories here. You've got those like Tesla and Jaguar, that really are ahead with their ranges, and then you've got the likes of Vauxhall and, actually, some of the Audi and Volkswagen Group products, with shorter ranges, which will have a much steeper depreciation curve than others."