Different powertrains attract different values - even in a used car market as strong as the current one. Jack Carfrae asks how ICE and plug-in vehicles are faring second-hand. 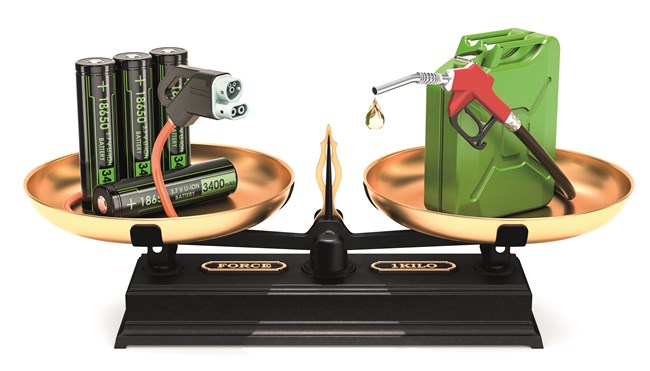 It is hard to put your finger on anything that relies on a historical trend in the used car market. That is not down to a lack of data, rather that the market has been so skewed by short supply and high prices for so long that anything resembling the norm is well and truly out of the window. Shoreham Vehicle Auctions' managing director, Alex Wright, sums it up: "The biggest problem we have is that the figures are just so colossally distorted."

Nonetheless, there are still nuances between the major fuel types and how they perform on the used market. Moreover, the broader perceptions of them will dictate their worth and longevity, something fleets would do well to remember, because used car buyers rarely look at the same things as company car drivers with a choice list, except the current conundrum: 'can I actually get one this year that's anything close to what I want?' but we will put that to one side for now.

Plug-in hybrids are arguably the area to which fleets should be paying the most attention at present. Now is a good time to defleet older PHEVs with shorter ranges according to Jason King, head of valuations at Auto Trader.

"There's probably an opportunity to defleet early PHEVs while the market is quite buoyant. The early stuff will do 20-odd miles [on one charge] and some of the modern stuff will do 50, so there's a sweet spot where, if people want to embrace a bit of local electric driving, then actually, in the used car market, there's probably an opportunity to do that now before it's superseded.

"You want that maximum benefit locally and, at under 30 miles that becomes more of a stretch, so I would probably cash in on some PHEV stuff earlier than anything else," he says.

Paul Titchmarsh, operations director at JCT600 VLS and a member of the BVRLA's defleet committee, gave us a concrete example of a relatively early plug-in hybrid doing exactly that. "It was a first-generation BMW X5 plug-in, a petrol 40e, and it was in an unusual one-off colour combo - dark blue with a brown interior - and it went bananas. I think it did something like four grand beyond CAP clean - and the car wasn't perfect, either."

He adds that, although large, early plug-in hybrids are not especially efficient unless they are enthusiastically charged, they can take a bite out of what is traditionally diesel territory.

"When those cars start to appear, that's where you get a bit of a chip away at the diesel [SUVs] that are around. If it were petrol only in an SUV that size, it would be horrifically thirsty and very expensive to run, but once you install that element of a plug-in in those cars, it's all different."

On plug-ins, battery-electric cars from volume manufacturers were the most in-demand car by fuel type in January, according to Auto Trader's monthly market intelligence report, while Stuart Pearson, BCA's Chief operating officer for UK remarketing believes there are improving demand levels for EVs. "Rising values reflect that the market is more receptive to alternative fuels," he says, "but these values also reflect the rising numbers of premium EVs [we sell] in what remains a low-volume sector."

For all the negative publicity and plummeting new registrations, second-hand diesels are not struggling. Used car platform Indicata claimed it was "the most in-demand fuel type in January," while King describes it as "flying".

"People talk about the demise of diesel but there is always going to be a section of society that still needs the benefits that diesel brings," adds King, "and of course, as fewer vehicles hit the market, residual values go up - that's the dynamic."

"Demand for diesel in the used sector remains strong and, for many used car buyers, diesel is the preferred choice of fuel type, as it offers great economy and typically lower running costs," explains Pearson.

"There will continue to be demand for diesel in segments where it makes sense such as SUV and 4x4, and as clean air zones are announced in cities around the UK, we expect to see demand rise for those exempt vehicles with the latest clean diesel technology."

Those with diesel cars on their books are keeping one eye on the longer-term performance with the expectation that they may eventually become less valuable. That is unlikely to happen soon due to the chronic lack of all-round supply which is not likely to change for at least a year, but Business Car has previously heard from specialists who believe that the second half of the decade could be when non-plug-in used cars, diesel in particular, start to tail off.

"If you look at the SMMT registrations from last year, hybrid and plug-in exceeded diesel," says Titchmarsh, "for me - and, I'm sure, for other people in a similar position - it's looking to see when diesel starts to fall off. There's almost a sort of limited shelf life on those vehicles, more so than there is with others, so when is that going to start?"

He adds that petrol used cars went through a strong spell when new diesel registrations started taking a dive, and points out how hard it is for the leasing industry to set residual values when trends and appetites have fluctuated as they have.

"About three years ago used petrols suddenly started to lift up, and they went above diesel in some instances, especially if the car was smaller.

"It's one of those things where you set your volume and residual value on something that happened a while ago, but it's going to do what it's going to do. Obviously, you do your best to make sure that, when you remarket the car, you get as much for it as you can. But when it comes back, you're locked into the value you set."

Toyota Prius-style, non-plug-in hybrids went through the mill in the earlier days of the pandemic. They were previously one of the gems of the used car market, coveted by the private hire sector for their reliability and low inner-city running costs, but folk stopped taking taxis and Ubers in pre-vaccine Covid-19 times which hit hybrid car values hard.

Prices have since recovered according to King, but the pre-pandemic premium has not. "I think the premiums have come back over the last couple of years," he says, "the premiums we could see in equivalent models were, at one point, 15%, but we're kind of looking at them as the same sort of money as an equivalent output petrol engine now. They're probably fine, but I do think it is the one technology that might be leapfrogged by the others."

The broader current issue is availability of used and, indeed, new cars; and that is creating its own set of warped results which can counteract the expected norm of any powertrain. "It's across the range - diesel, petrol, BEV - you name it," explains Shoreham's Wright.

"Don't get me wrong, we've had some absolutely storming results on electric vehicles - we've made over list price on six-month-old Teslas - but suddenly, we find a dealer saying, 'no I'm not buying this time, I've got a supply of new coming in,' so that will drop a few thousand pounds, and this will happen within a matter of weeks."

Demand for the Ford Fiesta - which lost its title as the UK's bestselling car last year when sales plummeted - is another good yardstick. "The dealers are going nuts if there's a late, low-mileage Fiesta out there," adds Wright, "it'll be gone immediately, and it doesn't matter what powerplant it's got in it.

"We've also got a Ford dealer in London, who doesn't normally touch diesels, because the London market doesn't like them, but we're adrift of that now. Even he will consider the odd diesel, because he can't get the stock."