Recession or not, the used van market is in unbelievable shape and shows no signs of letting up. 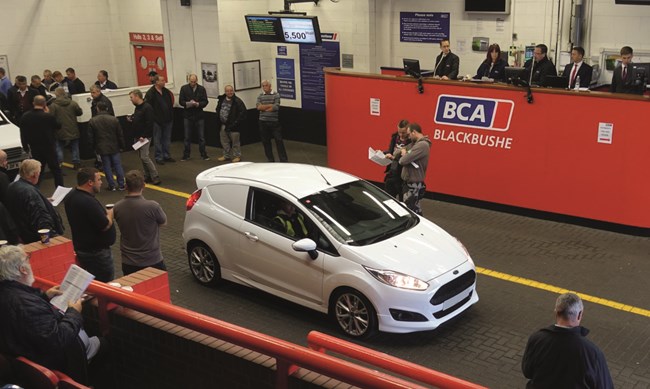 It is often said that LCV demand is a barometer of the economy - see almost any of the SMMT's monthly registration commentaries for details - but it is a harder comparison when the two are no longer in tandem.

The UK officially entered a recession on 12 August, when the Office for National Statistics reported a 20.4% economic drop in the second quarter of the year, which was hardly surprising. There are also seemingly well-founded predictions of a double-dip recession, as the government's recovery measures run out of steam and, at the time of writing, the country had just commenced its second major shutdown, less than two months shy of the ever-looming cloud that is the supposedly final Brexit arrangement.

You would think, then, that the light commercial market would be in the doldrums - at least if the 'one equals the other' quip is anything to go by - but it very much is not. New registrations shot up by 26.4% year-on-year in September, although that mainly shows just how unattractive the first tranche of WLTP models was in 2019.

Used vans, however, are on a seemingly unstoppable streak. Cox Automotive, which owns auction giant Manheim, reported five months of "record-breaking performances" in its quarter three update, which included September. The firm's wholesale values were up 32.3% compared to quarter one, with identical age/mileage profiles, and it said price guides values rose by 20% in the same period.

The numbers were similar at every auction company we spoke to. BCA's average LCV sale prices rose from £7,709 in August to £7,994 in September - up 3.7% and the second-highest value recorded since lockdown (June's £8,096 was the peak). September's prices "averaged nearly 113% of guide value expectations", said UK remarketing COO Stuart Pearson, "with sold volumes increasing by a significant 38.1% during the month. Average values are continuing to significantly outstrip guide prices. to reach record levels."

"In that first sale [after lockdown] we did between 110% and 120% of March [prices] and the market just took off like an absolute storm," adds Shoreham Vehicle Auctions' MD Alex Wright.

In late October, Aston Barclay reported a 4.2% rise in average van sale prices in quarter three, which formed part of a 26% total increase throughout the year.

Cox's customer insight director, James Davis, explains why used light commercial vehicles have become such cash cows: "There's roughly 10% less volume year-on-year in the market, so it's not a supply issue. It's the fact that there's a massive demand for commercial vehicles. [and] it's a supply-led recession because everything has been restricted.

"A lot of people are going self-employed, setting up their own small businesses, many of which are doing deliveries, so they're going to need a van. You then overlay the economics and the pandemic and, if you're a big fleet business, would you hang onto your vans for a bit or would you order some new ones? Because the challenge now is the EU exit and what's going to happen with tariffs."

The flow of new LCVs was far from abundant before the pandemic, but subsequent factory shutdowns have strangled it even further. Combine that with a healthy demand for rental vans - many of which cater for the spike in home deliveries and serve as additional 'social distancing' vehicles - plus the prosect of tariffs and restricted supply from Europe, and the majority of major suppliers to the used market are reluctant to defleet.

"Most of the rental companies are hiring vans out at very good rates," adds Wright. "They know there's a short supply and they're optimising their asset value."

"Some rental vehicles have come back but have then subsequently gone back out again [for further rentals] and haven't actually reached the auction," adds Andy Picton, chief commercial vehicle editor at Glass's.

We have talked before about the inflated prices paid for Euro 6 LCVs - anything with a diesel engine registered from September 2016 onwards - because they can operate penalty-free inside clean air zones. That requirement has not disappeared, but prior to the pandemic a number of UK cities - namely Birmingham, Leeds and Bath - were due to have kicked off their own schemes by now, but they have since been postponed. You would think, then, that may have taken the edge off prices - the reality is anything but. Fundamentally, demand has increased, but the motivation has changed because the scarcity of newer vehicles has simply bolstered their appeal.

"Euro 6 prices have gone up considerably," says Picton. "[They] will continue to track new prices and increase in value."

By extension, pre-September 2016 Euro 5 models are also commanding more money. Previously haunted by allegations of worthlessness when clean air zones came along, the continued absence of any such zones outside of London, plus the lack of newer vehicles, has caused buyers to turn their attention to older models.

Picton thinks it is also partly driven by the aforementioned rise in self-employed operators and delivery businesses: "[They] are possibly buying Euro 5s and older stock. The vehicle parc in the UK is something like 4.1 million vans, of which 32-33% are 10 years old or older, so there is still huge life in older stock.

"Part of the reason why prices are continuing to stay high is that there are very few ready-to-retail, quality vehicles. Vans that don't need any prep work, that can go straight back out on the road - people are paying really strong money for that stock at the moment, and that's going to continue for quite a while."

Minibuses are only area of the used LCV market that has not been strong as it might be. The pandemic has contributed to that because multi-seater passenger vehicles are less than ideal at present, but there was also an abundance in the market earlier this year, which was a reaction a dearth two to three years ago.

Cox's Davis explains: "Cap increased the values of minibuses in 2017/18 because there was a massive shortage. Then, suddenly, school minibuses aren't going on trips, daily rental companies aren't renting them because of social distancing, airport pick-ups aren't happening.

"Minibuses will sell, but they can be significantly behind book. But it's not fair to put it all on the pandemic because the values needed to realign in quarter one anyway."

Given the government's hokey-cokey approach to lockdowns - and you could probably say the same about Brexit - the strength of the second-hand van market might seem like a last hurrah, an upward flick of the tail before any remaining good times sink. However, while the wider economy is harder to call, all the signs say used LCVs will continue fetching good money for at least the first quarter of next year.

"I think it'll last until March/April, at least," says Wright. "The historical cycles that we always go through mean it's usually strong coming up to Christmas due to the delivery market - and if you think about it, Covid is not going to turn that one off.

"Then we always have a lull the first week back, and the market usually picks up strong. If there's any optimism out there progressing through this second wave, we're still going to have a very strong market. And, realistically, our historic [stock] cycles don't change until we get to the Easter bank holiday."

"I think a lot of this could well be for a good part of next year," adds Picton, who believes much of the demand for used LCVs will be caused by a continued absence of new ones.

"The UK needs about another 60,000 to reach their predictions, so I think we are going to see strong used prices on a subdued new market."