Jack Carfrae asks the experts how the auction industry and the
process of selling ex-fleet vehicles has changed through the ages. 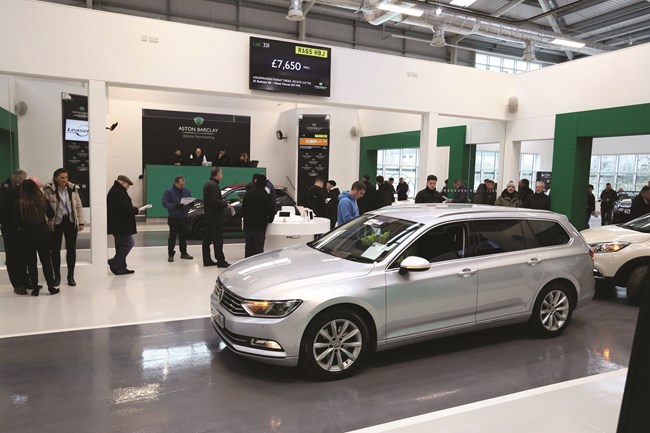 The earliest recording of an auction was in 500BC, and you could argue that the actual sales process hasn't changed that much since then."

That's Alex Wright's initial response when asked how motor auctions have developed. Managing director of Shoreham Vehicle Auctions and a 30-year veteran of the industry, he admits that old-school sales were hard work. Everything was sold as seen, the chap clasping the hammer rattled off clipped descriptions at a rate that would make a Grand National commentator sound slow and if you were outside of your native region you could probably bank on a thick and largely unintelligible dialect.

"Sometimes, it used to take us a couple of years just to tune in to what the auctioneer was saying," adds Wright.

That goes some way to explaining why the industry was previously shackled with a sheepskin coat image. That there is still a rostrum with an individual barking narrative and wielding a hammer proves Wright's point that the fundamental concept is more or less the same as it was in the Roman era, but the bigger picture of the way in which the majority of ex-fleet vehicles are sold is now rather different.

Auctions are far from alone in that they are yet another industry that has been upended, in multiple ways, by the internet. However, the four major companies to whom Business Car spoke universally agreed that the online era's biggest modification has been the complete overhaul and clarity of vehicle descriptions to facilitate remote sales.

"The biggest change in that period [of online sales] is the way that vehicles are presented and the amount of information that people now expect to be able to
help them make a decision," says
Graham Howes, commercial director of CD Auction Group.

"It is the expectation of descriptions and full-blown inspections, with imagery, detailing all the damage and making that available to buyers," adds Martin Potter, group managing director at Aston Barclay. "None of that existed 20 years ago, so every buyer had to turn up and check the cars themselves."

Digital motor auctions originated in the US and crept into the UK in the
mid-2000s. Depending on the type of sale and the company, online purchases can, these days, account for anything from around 20% to almost all of the transactions, while their omnipresence also heralded a universal stock grading system, introduced by the National Association of Motor Auctions (NAMA) in 2012. It isn't without its flaws, as auctioneers freely acknowledge that one person's grade A could be another's grade C, but it serves a purpose in terms of standardisation.

"People just expect vehicles to be graded now," says Howes. "We have actually got to the stage where, for us to deal with some of the bigger buyers, such as supermarkets, we have to adopt a grading of some description for them to make it easier to choose, because they have got lists coming at them from all over the place, all the time. We still get feedback that a grade A in one site can be a grade B somewhere else - and it could even be a grade C, so the application of it is still a problem, but the need to have it is becoming more prevalent."

For all the transparency the digital age has brought, some buyers, at least, were happy to bid on vehicles of questionable condition in the early days of online sales - without even having seen them - but it was that exact activity that encouraged the industry to develop its web offering.

"Online auctions really took hold in about 2006/07 and the bit that blew me away was that we started getting bids on parcel delivery vans with no appraisals and no pictures," says Wright. "Some of them had loads of dents all over them - a lot of wear and tear - but we were getting bids from places like Malta.

"I spoke to one of the buyers and he said: 'We know they have got dents, but they are value for money and we are going to buy them'. They had £1,500 for a five-year-old Combo, and that is what they were bidding on, so that changed things. We realised it wasn't just
late-year, low-mileage, and that we had to develop that online market - we needed pictures, grading, mechanical checks, the things that allowed us more of those people - and we actually had to take on colossal overheads to tackle that market."

There is still a place for physical auctions, although their role is often more logistical. Fleets and leasing companies rarely have the space, time or facilities to store or sell their own stock and no level of digitalisation is going to extract the physical asset from the process. Equally, there are still trade buyers that like to inspect their purchases in person, even if they actually do the bidding online.

"You get a blend of both," says Philip Nothard, customer insight and strategy director at Manheim. "Some buyers are 100% trustworthy of online; they don't need to see the car and if it isn't as described, they will send it back. But some of them still want to turn up; they still want to see, touch and feel the car, then they don't want to necessarily be in the auction hall bidding with everybody else, so they sit down, have a coffee and watch the sale online."

"People use our app exactly like that," adds Potter. "They will come and look at the vehicles, they will use the app to bid and, sometimes, they won't even be in the coffee shop - they will be stood in the hall using it because it is a more discreet way of bidding."

One of the impacts of prolific digital sales, both in terms of auctions and retail advertising, is the gradual softening of once-typical market trends. Seasonal variations were once a staple of used cars - certain models are worth more or less depending on the time of year - but that's much less relevant today.

"[Those trends] are flattening out and it has been happening for some time," says Nothard. "SUVs and convertibles have less peaks now and it is becoming a
year-round market. You still get your January uplift and your December drop off, but peaks and troughs are much less dramatic than they were.

"The 4x4 market has changed completely," says Potter. "You used to get that historical uplift in value from October through to February because the weather would change, but there are so many SUVs now that it doesn't happen so much. It is a much more stable market throughout the whole year and I think that is because a lot of people who are buying those products aren't buying them for their 4x4 capabilities."

It is the same for regional disparities, too - the old adage that cars are cheaper up north than down south.

"We don't see regional variations like we did before. That's died off," adds Wright. "Thanks to the internet - Auto Trader, etc - the retailers know what their vehicle is worth regardless of location, so it comes back to that increased openness and transparency again."

There is one modern exception, though, as Nothard explains: "The main driver of any regional stuff now is diesel. There is demand from your London dealers for petrol autos because that is what people in that area want. However, there is a trend starting to appear in that those same dealers are starting to bring the diesel product out of those areas and send it elsewhere, because of diesel rhetoric and the Ultra Low Emission Zone."

As for the future, Nothard predicts that 80% of transactions will be done online by 2020, as digital technology accounts for an even greater amount of the process.

"At some stage in the future, you will be able to say to the buyer: that is the car's service history and this is what it has had done, because it will all be sitting there in the cloud, available to whoever wants it and whoever has got the access code for that information."