Damien Dally, who was appointed Alfa Romeo UK managing director in 2021, not only has 20 years' experience of the Italian brand - he's also a proud owner. Martyn Collins speaks to him about the new Tonale's fleet opportunity and the challenges ahead. 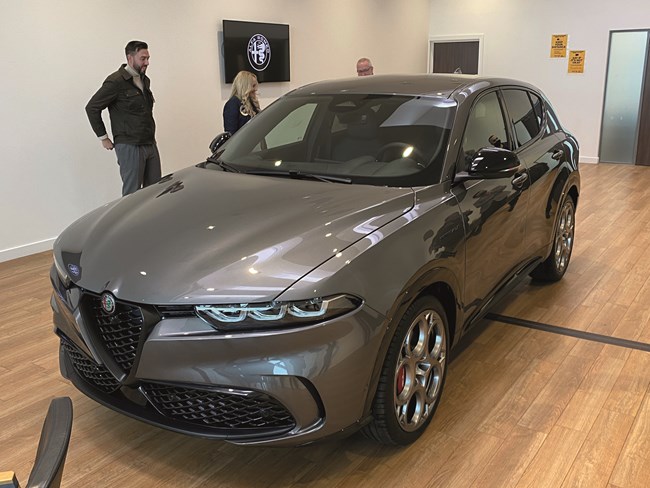 Damien Dally admits that during the 20 years he's been with the brand, Alfa Romeo has been in and out of quite a few segments. "As good as that's been, it has been frenetic at times. There have been times when we've been reasonably successful in the fleet area, although less so currently because if you look at the D-Segment and the i2, you've got a mass movement away from combustion engines - which is where we're playing today.

"In fairness if you look at the area in which we're playing in, we're improving our share and building, but in this market, one of the key drivers for company car choice is Benefit-in-Kind (BiK). We've not had the BiK offering that the Tonale gives us - particularly with the PHEV versions. So, the BiK for that car, even for a 40% taxpayer, will be less than £200 per month. I think Alfa Romeo then will appeal to a wider audience, and with our current combustion engines, we just don't."

That's not to say that Alfa Romeo's fleet performance in the C-Segment hasn't always been strong. "I mean we never were, or will be as I see it, a big fleet deal company. Alfa Romeo appeals to, A an SME audience, or B a User Chooser type of scenario. We need to make sure we get on lists, then Tonale's a viable, credible choice, with low BiK. I think the opportunity with this car is good - the appeal of the brand has always been there, but the offering hasn't."

However, Dally believes the Stellantis fleet opportunity for Alfa Romeo is really big. "A lot of knowledge, know-how and experience has immediately been brought to the party. You can't buy that experience, it's real and genuine, and that's been useful - especially when the Tonale is our first voyage into electrification.

"Also, I think there's a massive opportunity to bring cars to market in a more efficient way, but also preserving what is unique about Alfa Romeo. Tonale is important because it's the first one that Jean-Philippe Imparato, our CEO, is behind and he is tremendously influential and passionate about the brand - I know he has a no-compromise vision.

"Then we've got a whole host of technologies and experience from the wider Stellantis group that we can bring to the table. Keeping what was great about Alfa Romeo and filling in the gaps for what we've not had. It's going to give us a big leap forward, and the Tonale is the first car.

"The unique thing about Alfa Romeo is that people are always talking about the brand. If we can put an Alfa Romeo in front of somebody, get them behind the wheel, hopefully they will think it's pretty fabulous and perhaps they hadn't considered us before! This is what the wider Stellantis fleet people can probably bring to the party - not in a pushy type of way - just by sending an Alfa to them just to see what they think. I think the cars do the job, so this is a very exciting moment."

The Tonale is the first plug-in hybrid Alfa Romeo, but Dally is first to admit that they're clearly on a path to electrification. "This is why Tonale is such an exciting moment, as it's how we translate everything that's traditionally Alfa Romeo into this modern world. Clearly electrification will have to be part of Alfa Romeo's DNA moving forward, but what's interesting is how we do this.

"Also, some people might have been turned off Alfa Romeo in the past, as they've seen us as a niche sports brand. We're a brand that makes sports cars that can be driven every day, we need to tell the Alfa Romeo story - there are no shortage of them, it's how we translate that to a whole new audience. I know there are people choosing a new company car, who are not considering an Alfa Romeo - and that could change with this car.

"Tonale is a car that will appeal to a wider audience, we've been strong in retail, where people have been paying with their own money, when someone else is paying, people can be more open to alternatives. I think we've done the hard bit, if we can widen our appeal, the fleet opportunity is strong moving forward. And this car will be the first of many."

Dally admits they are going into one of the hardest-fought segments with corporate sales of C-Segment SUVs accounting for 50%. Plus, the last car they sold any degree of fleet was the Giulietta, but they see a real opportunity for the Tonale. "We're not interested in being in every area of the fleet market, just to be clear. Where I see Tonale, there are opportunities for user-choosers, plus small and mid-size enterprise. We're never going to be doing 25,000 cars in fleet - it's more about widening the appeal to the fleet user.

"Tonale needs to be a conquest car, but we really need to re-engage with customers that we've potentially lost. Not because we've fallen out of love with them, or that they've fallen out of love with us. We've sold a lot of cars in the B and C-Segments, SUVs are now 50% of the C-Segment market, which tells me the world wants SUVs now. We've got to go to those Giulietta customers, take them by the hand and bring them back to the brand with the Tonale.

"I think we will attract some customers from some non-premium brands, but premium is interesting too. I see similarities with us and German brands such as BMW and Audi, but we will also attract customers who see us as a stepping stone to other premium brands."