Audi was ready to launch two major new products when the coronavirus crisis struck the automotive industry. Simon Harris finds out why there's cause for optimism at the brand. 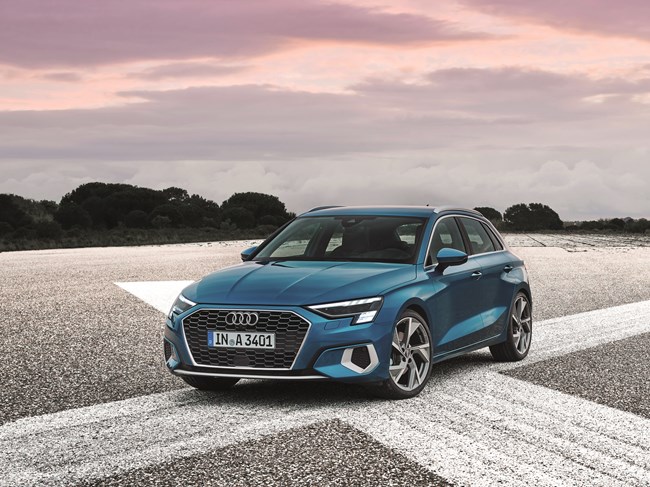 It should have been a significant year for Audi, as one of its high-volume models was due for a long-awaited renewal, while it also planned to accelerate the introduction of electrified vehicles. The Covid-19 lockdown delayed the UK introduction of the new A3 Sportback - a car that sells very well into the fleet sector - as well as the latest addition to Audi's growing range of electric cars, the E-Tron Sportback.

James Buxton, head of corporate sales at Audi, has been trying to balance delivery of key worker vehicles as well as support for other customers.

"It has been one of the most challenging periods of my career, and for a lot of people, regardless of the sector or industry they're working in," says Buxton.

"Our network and our customers have been superb throughout. As we speak, we're open for deliveries in England, and even during the lockdown we were surprised and pleased that we were still taking a relatively significant amount of fleet orders.

"Our focus has been on working with customers during this period and what's also been interesting is each customer has different circumstances and different challenges.

"We've seen many healthcare providers need to have vehicles deployed, or help with routine maintenance with the cars they own. There are other businesses where they're not utilising the fleet and there is also uncertainty around the vehicles they have in the order bank.

"We've worked with customers to reassure them that we can cooperate to deliver those vehicles at a later stage. Others are asking which dealers were able to supply them with vehicles. The order take and deliveries has surprised us and is testament to the strength of the customer base."

Buxton says interest in the A3 Sportback has been strong, despite the disruption of the Covid-19 lockdown, and at the time of our meeting in mid-June had already taken 500 orders for the car.

He says there's strong appeal in the new model, with up to a six percentage point reduction in BIK tax on WLTP CO2 compared with its predecessor, as well as no increase in price, with a few derivatives at a lower price point than before. He also pointed to a residual value uplift compared with the outgoing model.

He is still convinced that internal combustion engines (ICE) have a place on fleets, despite the rapid proliferation of plug-in alternatives.

"The key to success in the fleet market is having a really diversified portfolio," he says. "For example, there are a number of customers for whom, and for a whole host of reasons, diesel is still the best option for that fleet.

"Certainly for essential users and job need drivers, diesel is still the preferred fuel for them. The fact that we still have a strong line-up of petrol and diesel, as well as the plug-in hybrid (PHEV) offering, which we're building quite aggressively at the moment, as well as the battery electric vehicles (BEVs), gives us a really broad spectrum of options.

"So when we go and visit a prospective customer, we can cover all of that demand. Someone who has a perk car is far more interested in the tax savings of a BEV or PHEV.

"If you look at our order bank position, we're still around 75% ICE. And we're seeing that shift, but fundamentally there's still a significant ICE market in the fleet arena."

Audi has been making progress with battery electric vehicles, however, and now offers the E-Tron SUV in two power outputs, and has just added a sleeker Sportback version.

Buxton says: "The clarity that has been given to company car tax rules this year, and the reductions in benefit-in-kind tax that PHEVs and BEVs offer mean we're anticipating growth in that channel next year.

"At the moment we have E-Tron 50, E-Tron 55 and E-Tron Sportback, and one of the reasons we introduced the 50 in the UK was to offer a slightly lower access point into a premium BEV product. We've exceeded our order-take expectations on that vehicle to date.

"We unveiled the Q4 E-Tron in March, which will be our B-segment [D-segment in the UK] full BEV, and the launch of that car late this year or early next year is on track.

"While the E-Tron 50 is an exceptionally attractive vehicle, when you take into account the BIK and residual value, and the other running cost advantages, it's still a £60,000 vehicle.

"With the Q4 E-Tron we will access a lower price point with a higher number of drivers in that sector. So that car will be important from both a fleet perspective and a retail perspective.

"It really ties into our overall global strategy, which is to be the number one premium electric mobility provider. It's our ambition to be carbon neutral by 2050 and the avalanche of low-CO2 and zero-CO2 products is really starting to gather momentum now. This time last year we had maybe 50 E-Trons in the order bank; now we have significantly more than that."

The coronavirus crisis has presented its fair share of questions for fleet operators, as some employees have been put on furlough, while others have been working from home and using video meetings instead of physical ones.

Many organisations will be re-evaluating their company car policies to ensure the most efficient and cost-effective deployment of mobility options.

But Buxton says many businesses and drivers will have noticed the advantages of electric cars, as well as their feasibility in roles where employees are reducing their annual mileage.

He says: "We don't know how companies will view company cars post-coronavirus crisis. Each brand operates within different segments within the fleet market, and Audi would be more focused around the perk driver, and having a company car is still a major benefit for employees, which employers still like to offer for reasons of staff retention and loyalty.

"What might happen is it could speed up the electrification journey for some customers. If they are using that car less and EV becomes a more viable proposition, it helps them make that jump.

"The adoption of PHEVs and BEVs will lead to more people wanting to opt back into company cars.

"Not for every employer, but for a lot it also helps with the grey fleet conundrum, around paying someone a car allowance when the employee buys a high-performance petrol vehicle that isn't really suitable for that business sector they're operating in, or meeting customers in a particular business sector.

"Overall we're planning for a shift back to company cars, driven by PHEVs and BEVs. For the overall market my gut feeling is it could speed up the adoption of EVs in the UK.

"The trend for increased BIK tax has accelerated in the last 12 to 18 months (with the shift from NEDC to WLTP in CO2 emissions). A PHEV will become the dominant fleet vehicle in the executive saloon market, which, traditionally, Audi, and our fellow premium brands, have been very strong in. When you look at our order-take, PHEV represents around 30%.

"We do still sell ICE vehicles, which might work well for particular drivers and particular companies, but in a perk fleet arena, the transition to PHEVs and BEVs has happened, and it's accelerating with every passing month."

Regarding future challenges, Buxton says Brexit is still looming on the horizon, with potential disruption should the UK leave the EU without a trade deal at the end of 2020. He says some customers had already begun to extend contracts until the impact of Brexit was known, and although people are now managing the immediate problems surrounding the coronavirus lockdown, the issue hasn't gone away.

"At some point those cars will reach an age and mileage where it becomes uneconomical to continue to extend their contracts. We expect to see a little bit of that washing out later in the year.

"The emergence of more BEVs and PHEVs has perhaps driven a little bit of that culture. Some customers have been waiting for these models to proliferate and offer more choices."

Although the road ahead will most likely be very bumpy, Audi appears to be well prepared.