Audi has outlined its electrification strategy and looks forward to the introduction of the Q4 E-Tron later this year. Simon Harris talks to head of sales Steve Catlin. 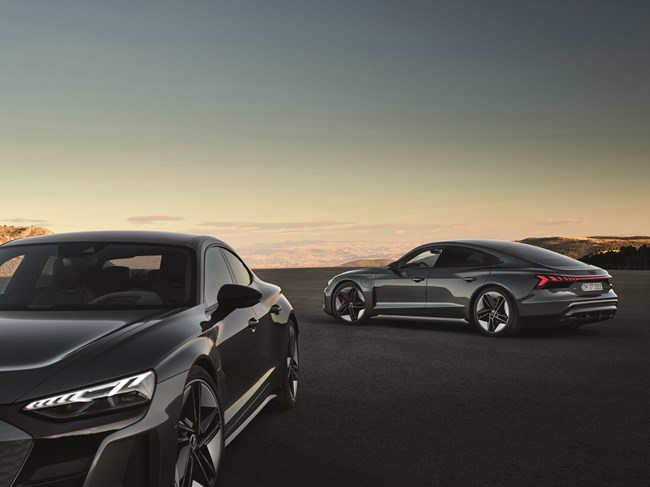 The acceleration in electrification is part of the process of making the brand more sustainable, according to Audi, as its factories also move towards CO2 neutrality. However, it couldn't have happened at a better time for the brand, with demand for electric cars and plug-in hybrids among fleet users rising sharply.

The second-generation A3 plug-in hybrid is now on sale - the A3 TFSI E - and there are plug in hybrid versions of the A6 and A8, as well as an A6 Avant later this year and an upgraded Q5 plug-in hybrid. We will also see a Q3 TFSI E this summer.

Audi has just launched the high-performance version of the E-Tron and E-Tron Sportback - the S - and in a few months will be adding the E-Tron GT Quattro four-door coupé, followed by the Q4 E-Tron a little later in the year.

The E-Tron SUV and E-Tron GT Quattro are unashamedly high-end cars, currently only available to director-level employees, but extremely appealing because of the favourable BIK tax status.

Steve Catlin, Audi UK's head of sales, talks often about the need to lower the bar for entry to EV, although he admits E-Tron drivers perhaps overlook the sustainability credentials of electric cars.

"E-Tron owners don't talk much about the sustainability aspect," he says. "They talk about the performance and the excitement of driving it. But the new S derivatives extend the reach of our E-Tron models in the marketplace."

He says that in 2020, the Audi E-Tron was ranked as the world's best-selling premium German electric vehicle, and Audi UK increased E-Tron sales by 90% year-on-year.

"E-Tron was a significant part of that, with us selling 6,000 units in the UK and hopefully we'll sell a few more than that this year."

Catlin is predicting strong growth in alternative fuel vehicles (AFVs), which is no doubt aided by Audi's position as a key supplier to UK fleets, and later this year the Q4 E-Tron will start to tap into a new stream of employees, as Audi's most affordable electric car to date.

"We expect AFVs to account for around 40% of our annual sales volume in the next few years, and that journey will continue with the other products this year.

"The Q4 E-Tron gives us the ability to access the market at a lower price point and build the volume and reach of our EV range. By 2025, we expect to have 20 full electric cars in our model line-up and 10 plug-in hybrids.

"We've seen from a fleet perspective a lot of success with the E-Tron in the past 12 months, which continues to grow and salary sacrifice employees have played a role in that.

"But the drivers are generally at management level. The market is moving really quickly in that direction but one of the challenges and opportunities for corporate sales is how we expand out of the pure management grade company cars and the essential user fleets.

"To do that we've really got to do a number of things. One of them is to improve the charging infrastructure and support that through the E-Tron charge card and access to it.

"As vehicle range continues to increase that will also support entry into that part of the market.

It's a good opportunity, but that part of the market will be one of the last we see move towards EVs.

"The Q4 E-Tron will attract more of a general user-chooser. The proportion of the fleet market that we expect to be AFV is predicted to grow. It was around 30% last year and is predicted to be 35% this year, and will continue to rise from there.

"But I think we might see that accelerate further on the back of new launches such as the Q4."

He says that the brand needs to adapt to make the most of the opportunity the more affordable EV will present, including training the fleet team as well as Audi dealers.

"We need to be set up for that and ensure the cars are targeting the right buyers, and the government also needs to support that, with clarification and consistency around BIK tax.

"We need to ensure people curious about EVs have answers to the questions they might ask and we will have those answers on our website. We're ensuring all our fleet team is fully trained, learning about EVs and infrastructure, as well as knowledge."

In spite of the recent announcement to reduce the level of the plug-in car grant, and lower the qualifying vehicle price to attract it, it's unlikely to affect fleet demand for electric cars, as the removal of the grant entirely from plug-in hybrids a few years ago hasn't adversely affected demand.

But Catlin also says the government showing a consistent approach is also important to give people faith in making the switch from an internal combustion engine car.

Another aspect is working with infrastructure providers to ensure living with an electric car doesn't create any new problems.

Catlin says one of the challenges is the motorway network for real long-distance driving, although there was an announcement in March 2021 that Gridserve has taken a stake in Ecotricity - the current provider at motorway services - and will help upgrade the charging facilities across the UK's motorway network.

Catlin adds that for most drivers, if they have three cards, it's possible to cover more than 90% of the market. He says: "If you have our E-Tron card and include Ecotricity and BP charge card, it would cover almost the entire public charging network. And we're continuing to try to expand the number of suppliers who work with the E-Tron charge card."

He says that, in spite of ongoing turbulence caused by the pandemic, as well as preparation of the looming Brexit deadline in 2020, he is optimistic about the year ahead and beyond.

"The Brexit deadline made manufacturers order for stock to avoid any complexities around a no-deal Brexit, should there have been hard borders and tariffs, so we have had a healthy inventory in the short term

"The fleet market is also faring slightly better than the overall market during the lockdown, from both order take and registrations.

"We think the volume of plug-in hybrid vehicles will remain stable over the coming years, but the real opportunity for growth is with EVs."