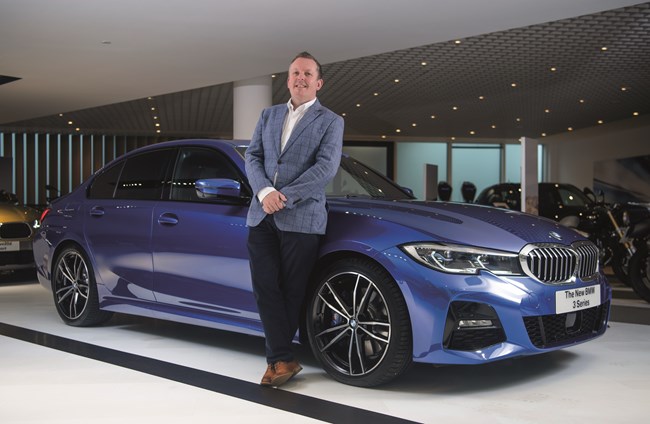 BMW started 2020 with some impressive new additions to its PHEV line-up, including a new X5 that had a 54-mile plug-in range. That put it in the 6% BIK tax bracket from April, and, at the time, it was the largest car with an internal combustion engine with such a low tax rating.

It certainly helps illustrate the view of BMW's general manager for corporate sales that the increasing choice of plug-in hybrid models will help lure back employees who have opted out of company car schemes in recent years.

"Company car culture is embedded in the UK," says Rob East, dismissing the supposition that the company car is in terminal decline. "It has been a fundamental part of people's remuneration packages for decades.

"I believe we'll see people opting back into company cars, which might seem counter-intuitive as we've seen the trend of more people taking a cash alternative to a company car over a number of years.

"But as we come out of the coronavirus crisis, people might have a bit more job insecurity and financial insecurity, with less appetite to take the risk of operating their own car. Particularly now that they have a wider choice of plug-in models. They could opt back into a car scheme and save money."

His claim isn't baseless. He says that during the period of pandemic restrictions BMW engaged with fleet customers in a number of digital events.

"We tested this theory and did a series of customer webinars, and we conducted a survey," he says. "We asked them if they saw more people opting back into company cars, and 72% shared this view.

"Talking to a number of fleet managers, they still have a desire to get people back into company car schemes because of duty of care and corporate and social responsibility commitments.

"Time will tell, but I think in the next few years we will see more people opting back in."

He adds that three quarters of survey respondents had changed their fuel policies over the previous 12 months, which might have been diesel-only, or petrol and diesel-only, to boost the number of PHEVs their employees had access to.

"Customers and the market have much more confidence in these vehicles now," says East. "Years ago they were 'alternative-fuel' vehicles, but they are rapidly becoming the norm.

"They were probably a brave choice about five years ago, but talking to some of our customers now and models like the 330e [3 Series plug-in hybrid] have become the default car."

He adds that almost two thirds of the cars now being supplied to fleet customers are plug-in hybrids.

"Around 65% of what we sell now is plug-in hybrid," says East. "We've got 25 electrified models being launched between now and 2023, of which around half are electric."

The next fully electric model on the horizon is the iX3, a battery electric version of the current X3, which marks a change of strategy, with previous BMWs given an 'i' prefix.

The i3 and i8 are stand-alone models that don't share their architecture with other BMW vehicles, but we will see more electric power options among the mainstream BMW range in future.

"Every year since the i3 has been on sale [it launched in 2013] sales have continued to grow. That has been quite fascinating. Customers, regardless of whether they're corporate or retail, are much more aware of the technology and accepting of it."

But, he says, for the time being many fleet customers will be sticking with conventional diesel or petrol power as the most suitable option for their drivers.

"Certain usage patterns and profiles mean people will prefer to choose petrol or diesel," says East. "We're seeing the trend of diesel declining. But we continue to invest as a global company in clean diesel technology, and we have been introducing RDE2-compliant diesel engines.

"Customers are becoming more savvy about which works for their own usage profile."

East talks a great deal about differentiation for BMW, and although many of its models have direct competitors among rival premium brands he is keen to find ways to make BMW stand out.

Feedback from customers has helped shape a new initiative, being piloted by BMW towards the end of the year, to try to create more direct brand engagement with company car drivers.

East says: "One thing as an industry we're not very good at is creating and maintaining relationships between the driver and the car manufacturer.

"We're mindful of this and want to make sure that every company car driver choosing a BMW Group product gets the right experience, knowing that many of them won't be going to a retailer for handover and will miss out on some of the other elements a retail customer would encounter and value.

"We created a CRM [customer relationship management] loyalty and rewards programme called Inside Edge - it's very much as a pilot, but gives company car drivers the opportunity to sign up to all of the brand content they want, but also uses some clever tech to provide a frictionless experience.

"I think this will be a really important customer development and has been done in partnership with fleet managers and leasing companies. This engagement platform gives us the opportunity to create a direct relationship with them."

So far this year BMW Group has launched revised versions of the X1 and X2, including adding plug-in hybrid variants, a Gran Coupé four-door version of the 2 Series, the Mini Electric, and the updated Mini Countryman. A revamped 5 Series is about to arrive with fleet customers this autumn, as well as a new 4 Series Coupé, with Convertible and Gran Coupé variants to follow in 2021.

East says: "We've had a plethora of model launches this year, and it shows no signs of stopping. That has been very positive.

"Since dealers reopened in June, retail has been buoyant, and used cars have been doing well. And we've seen something of a recovery in the corporate sector.

"We did have a tough few months but the product story continues. Reaction to the 4 Series has been positive, despite some of the comments around the design [of the large radiator grille].

"The order take has been strong, and has been amplified by the recent reveal of the M4 and M3.

"We're getting the first of the facelifted 5 Series models out to customers, now with two plug-in hybrid options, in the 530e and the 545e.

"I know there has been this migration to SUVs, but the latest 5 Series Touring is an amazing car. We - not just us, but all brands - need to reiterate to our customers how great these large estate models are. We remain optimistic for the rest of the year and going into 2021."

Cautious optimism is well founded, as the rapid introduction of updated and new models should be tempered by uncertainty around the Covid-19 pandemic, as well as the end of the Brexit transition period on 31 December.

The car industry has been lobbying the UK government for a trade deal that would see 'frictionless' import and export of vehicles, as well as components, but time is running out, and the UK could find itself facing tariffs and disruption without an agreement.

Although East is hoping the car market resists any turbulence caused by the political landscape, he is philosophical regardless of the outcome.

"I'm not sure what stable looks like any more," says East. "We have so much uncertainty with how long the restrictions surrounding Covid will last, as well as the remaining uncertainty around Brexit.

"We will continue to plan prudently, particularly around customer volume against short-cycle business. Order rates are recovering, but we don't take that for granted. But we also have the best product line-up we've ever had. We've got many new products to come.

"Control the controllables - some of the uncertainties we just can't manage. We have good relationships with our customers and we try to make the best of these unique and slightly weird circumstances.

"Despite the uncertainty of this year and Brexit, I think it's going to be an exciting few years."