On top of the pandemic, 2020 was a re-set year for Citroen. Its UK MD explains why now is the right time to launch the C5X. 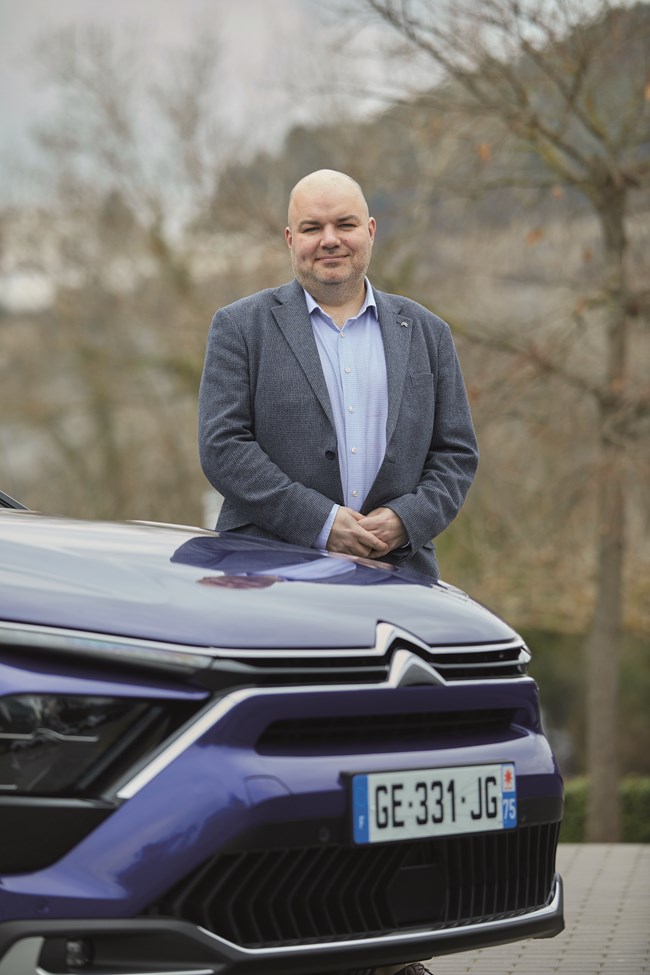 Citroen as a brand might have on occasions had a tormented past, but as Eurig Druce, the French company's UK MD since February 2020 tells me, the brand is credible again thanks to the Advance Plan, which was one of the first jobs he undertook in the role.

He says: "As we came into the Covid crisis in 2020, one of my first jobs as the new MD was to see all the new products for the next three to four years, which included a clay model of the C5X. With the prospect of launching that vehicle to fleet and retail customers in 2022, I thought we had a mismatch.

"It was clearly a brilliant car, but we had a trading model and a reputation that wouldn't allow us to succeed with it. So, we had to make some changes, we had to launch the Advance Plan, with its six pillars around connection to the brand, around fair pricing, around selling on-line, residual values, choice of channels to the market and the dealer network.

"One of the big impacts in terms of the fleet side that was delivered in this period, was a complete reset in the way we trade. We're setting some tight rules to the business that are written-in and not optional. We never go above 10% on any one model in rental. Covid has allowed us to go a bit further, as in 2021 we did 8%, and we'll do less than 6% in 2022.

"At the same time, true fleet business has grown in terms of mix. Underlying that, what we're seeing is a big improvement in terms of residual values. When you look back at 2021, the weighted average residual value improvement for the Citroen range was nearly £1,800. The instant reaction would be, that the whole industry saw improvements last year because of supply and demand. However, if you at some of our models ,which are benchmarked against other Stelantis products, you could see that the C3 was one of the worse positioned models in terms of residual values at the start of last year. Today it's the best when we look at the list price, the residual value and the divide the gap between those two - equalling the holding cost.

"The C3 Aircross likewise, saw a big improvement, but still with the opportunity to improve further. In fact, this is the model that suffered the most. In 2019, we did 25% mix of this car in rental. So, we are seeing  recovery, we are among the best for holding cost and we will be the best in terms of holding cost by the end of this year.

"The next launch will be the new C5X, which we're comparing residual values against estate cars, although we could do it against C-SUVs and saloon cars. Could it be a solution for the UK market as an estate car? Well, CAP seem to think so because we're at 42.4%, which is stronger than the opposition.

"The big benefit of all this is having fair pricing to start with. Many have perceived Fair Pricing as a retail action - it's not a retail action at all, it's a full business action because the benefit is for the fleet user. Particularly if they're in the user chooser environment, where the Benefit in Kind (BIK) that they pay is based on the P11D - so having a fair price to start with is in their interest. We took this unprecedented action in 2020, by reducing our list prices across the range. I don't think it had been done before, and many eyebrows were raised when we did it. Since then, we've improved our position further. Clearly, last year there was a market where there was price inflation because of supply, but we have held on tight to the promise that we made, we don't want to have high list pricing - the opportunity has certainly been there being honest to push prices up, but we took the opportunity to be even more fairly priced.

"Our list price for the C5X 130 PureTech Shine, which is the middle of the range, is £27,990. That compares well to the Peugeot 508, Volkswagen Passat and Skoda Superb which are all over £30,000, so we are fairly priced no doubt about it.

"Despite the data we have today, I want to see our residuals, at segment average or above - we're a strong credible brand to put your money into. And on quality, if we compare the warranty instance to the Citroen range of 2019, over a three-year warranty period, we're a third down on the number of instances. If you look at the first year's warranty, we're 48% down. The quality of the cars is comprehensively better than they've ever been. We've done the fundamentals; we now need to close that perception gap."

Druce believes that while the fundamentals of Citroen's business in the UK have changed forever, the perception does takes longer - but they're absolutely up for making that change.

He says: "It's our products that make the difference. There are slow, careful ways to improve perception - we will be doing those. Then you need your 'turbo boosts', and they come from products. I think the best way I can change perceptions, is to get as many business users driving our C5X." Druce tells me he enjoys being busy, which is a good thing as he admits he has a lot to do this year product-wise.

He says: "We've got an exciting product journey over the next couple of years, with some of the clues in the public domain already. We will have a fully electric range by 2025, so you can quickly identify where new launches will be over the next few years.

"We need to launch Ami - Ami is not a conventional car, it is an unconventional product, so it would be a sin to launch it in a conventional way. We will have the normal routes to market with the car, but I still hold the ambition to make Ami a form of an integrated travel system in major cities. We are a long way from that now, but I think
it is achievable.

"We are also working on a reputation project, we've done the work on credibility, we now have to get that credibility into the marketplace and into customers' minds using some of our existing tools such as 'Citroen Advisor', - it is unique in the marketplace - but we can do so much more in terms of promoting. We must go further, because it is an independent tool for sure, but there are plenty of them. We have work to do with Google reviews both with our dealers and ourselves. Then when we have a bad review, we can understand why and fix it - improving our reputation all the while."