Ford has embarked on a major electrification programme to transform its range by 2026. Ford's fleet boss discusses the plans. 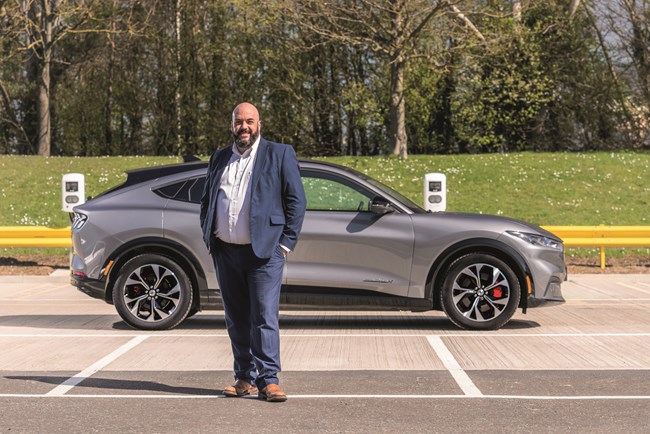 In February, Ford committed to speeding up its programme of rolling out plug-in and other electrified vehicles, so that by mid-2026, all of its car range would be 'zero-emissions capable', plug in hybrid or fully electric.

It made a further commitment that, by 2030, all of its car range in Europe would be fully electric, with two thirds of its commercial vehicle sales expected to be plug-in hybrid or all electric by that date.

An increasing number of car manufacturers are making similar statements about their direction of travel with electrification, although with the size of Ford's market share in the UK, it's likely to have a bigger impact on the make-up of the new car parc.

For now, though, it seems to be early days. Ford has offered a 'zero-emissions capable' hybrid version of the Mondeo since its launch in 2014. But take-up has been relatively low, although there is more interest now - as diesel is on the wane - than at the time of the car's launch.

In the past few months, Ford has also begun to roll out the same petrol-electric powertrain in the seven-seat S-Max and Galaxy.

But the company has begun to launch the vehicles that will make more of a difference, although for one of them there was a rather faltering start.

"We launched Kuga PHEV last year and during the first three to four months we saw a really strong order take," says Ford fleet director Neil Wilson. "Within [the] fleet, around 60-70% of our Kuga orders were PHEVs.

"That model also enabled us to sell to customers we haven't really sold to before, and clearly the BIK case was very strong."

A few months into sales, there was a widely reported fire risk linked to the PHEV battery, prompting Ford to instruct customers with the cars not to plug them in to charge.

Ford worked to find a solution, and production of the PHEV derivative is now under way again.

"Yes, we did have the challenge," says Wilson. "But the great news around that is we're almost at the end of it.

"We've replaced batteries in customer vehicles, offered goodwill gestures to those customers, and have had positive feedback about how we've handled the problem.

"We took a very different approach to how we've operated in similar circumstances in the past and committed a lot of resources, plus our dealers were very supportive.

"We're now building the order banks for Kuga PHEV and the mix is around the 60-70% level again, plus we're seeing this increasing trend towards EVs."

Several years ago, Ford offered a fully electric version of the Focus. But it was expensive and very much a niche product that had no marketing behind it in the UK. It fizzled out in the UK during the life cycle of the previous generation Focus.

But Ford is making its EV comeback with one of the most evocative names in its stable. The Mustang Mach-E has just gone on sale and offers customers a large coupé-crossover with an EV range from 270 miles to well beyond 350 miles, depending on the version.

The 270-mile car has a 269hp electric motor and rear wheel drive with a price tag of £40,000, although faster versions with longer range and all-wheel drive push deep into premium EV territory.

Wilson says: "The Mach-E is already a tremendous success for us. The order bank is very strong, despite the recent announcements regarding the cut in the EV grant. We had high aspirations for it and it is already exceeding those."

He says being full electric has opened the door to customers Ford might not have
had a relationship with for a while, and orders are increasing.

"We're providing cars not only to user-choosers at middle management level, but also for directors and other senior executives. There are some migrating from other SUVs and crossovers, as well as some of the other premium brands on the market, so we're super-excited about that. It's what we hoped for and it's gratifying to see it in action.

"The Mach-E is making some companies reconsider Ford. When you combine all of the things people already choose Ford for, production, driving dynamics, design, [and] ergonomics in tandem with an EV, it's a tremendous alternative in the market and people are voting with their orders."

He says true fleet sales are increasing for Ford faster than any other sales channel, which suggests both new plug-in products could be well timed.

Wilson adds that there are still some customers who are looking for diesel fleet cars, despite the fuel's recent decline.

But, inevitably, more customers will be interested in plug-in cars and Ford's next fully electric car will arrive in 2023, as part of a partnership with Volkswagen using the MEB platform, which is the basis of the ID3 and ID4.

Wilson confirmed that 2020 wasn't the easiest of years to launch new products, but, during the lockdowns, Ford focused its resources in reaching customers and finding out what they needed.

Wilson says of his first full year in the fleet director role: "Everything changed. We launched WLTP levels for CO2, and the BIK tax change for plug-in cars just as the pandemic was hitting.

"There was a lot of noise around and we had to work out how to ensure our customers understood some of the changes that were going on.

"We held some webcasts to get that story across. We needed to launch our products, and we had to communicate with our customers to ensure they understood how the rules were changing and what it meant for them. I'm really proud of how the team handled it in the past 12 months.

"The saying goes 'calm seas make poor sailors'. I hope that after the past 12 month we have better sailors. What we've had to do as a brand was respond faster to changing circumstances, whether it's Covid or Brexit preparations. Hopefully, the next 12 months will be more predictable, but we're certainly ready for whatever might happen."

Wilson is looking forward to new product launches in the next two years, including a change of strategy with the replacement for the long-lived Mondeo, which will end production this time next year, although Ford remains tight-lipped about the new model.

The next fully electric vehicle on the horizon is a version of the Transit, due in 2022, and Wilson is optimistic that customer demand will pull all of these vehicles on to the market.

"We haven't announced sales targets, but we do have a plan to sell a large number of PHEVs and Mach-Es to reach our CO2 targets [to ensure the average range CO2 doesn't incur EU fines]," says Wilson.

"We've got a good blend of vehicles that help contribute to our targets. We're on course with those plans, but the mixes and orders we're getting at the moment are slightly above our expectations, so we feel pretty relaxed about that.

"We had to reprioritise what we did last year, of course. Most of that was trying to understand what our customers needed. Cars were hit by the lockdowns more adversely than commercial vehicles.

"It made us reevaluate how we work with each other - internally and with our partners. Although things have had to change, when the restrictions are eventually relaxed we're more likely to operate in a hybrid of how things were before and how we work now.

"For me, this year, I would like to start meeting our customers face to face again. But we will have a blended approach where we use video conferences where necessary."

Wilson is keen to reconnect and ensure Ford is seen as a company that's easy for customers to do business with. It has a number of additional products, including its own telematics offering and a fleet management package, which might be attractive to smaller fleet operators.

"We can offer customers a wider range of products and services," he says, "But within that, we still need to be as easy to deal with as possible. We have become quite good at that, but I'm keen that we improve."

Wilson is also keen to see how the company car sector emerges from the pandemic restrictions, although is convinced it will be stronger than ever.

"There are a lot of theories around how the dynamic of the company car sector will change," he says. "Mainly, I think our customers won't change the number of people eligible for company cars in their business.

"This situation will not be forever. People will begin to travel again and probably the safest way of travelling as we emerge from the pandemic is in their personal vehicle.

"What we're seeing change is a resurgence in company cars and in salary sacrifice schemes, mainly driven by benefit-in-kind tax.

"The best solution for most people travelling for business is in some kind of company car or salary sacrifice vehicle. And many of those customers are now buying Mach-Es.

"There will be cash takers and traditional grey fleet, but the trend at the moment is moving away from them. There will be a vibrant company car sector over the next few years. They are still a great solution for many companies as part of the employee remuneration package."