Kia is about to move further upmarket with its new electric range-topper - the EV6. Martyn Collins speaks with UK president and CEO Paul Philpott. 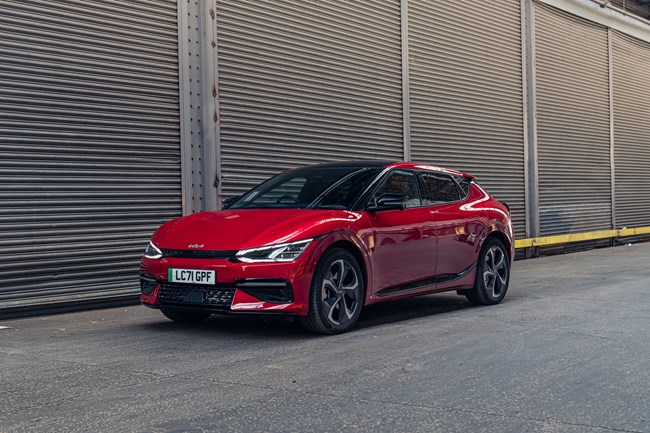 Paul Philpott is used to Kia's success, as he's overseen its growth over the past 14 years, most recently with the all-electric e-Niro SUV. Now Kia is launching what he describes as their most important car yet, in the form of its all-new electric halo model - the EV6. But Philpott believes that without products such as the Stinger coming before it, they could never have sold something like the EV6.

"Stinger and Sorento, and even Soul in its way, have stretched the brand. So, you know, we could have been strong with the Picanto, Ceed and Sportage, but we would have been a brand that was strong in mainstream segments. We've stretched it with several different products, bringing out the Proceed, a shooting brake estate. The Stinger, a supercar not sold in huge volumes and CO2 won't let us now, but it has played a real role in the development of Kia as a brand over the last couple of years."

Kia has just celebrated 30 years in the UK, it was July 1991 when the first Kia Pride was brought in. Paul believes that where Kia are today is built on solid foundations over a number of years and product iterations: "If we had brought out EV6 five years ago, it wouldn't have been believable - people wouldn't have bought into Kia.

"Kia had to strengthen before we brought out something like EV6. The last two versions of the Sportage have really driven demand and aspiration for Kia as a brand. The role the Picanto has played, the role Ceed is playing now with XCeed and ProCeed, all adds to the strengthening of Kia over many years.

"Our first EV was the Soul EV, and we didn't sell very many of them. The market wasn't ready for it, but we were one of the first to market with a perfectly functioning, decent range EV. Then we brought out e-Niro, which has been an unbelievable success for us. Year to date, it's the second best-selling electric vehicle after a Tesla.

"Everyone believes it's right for Kia. With our rapid move towards electrification, EV6 is a clear demonstration of where our brand is going. It is very tangible, from the exterior design, the interior design, the quality, and the technology comes together in a package that is as good as anything else in the market."

Philpott believes EV6 will be a car for both retail and fleet. "We've already got around 1,500 sold customer orders with deposits. The vast majority of those are retail. That's not because it's a retail car and not a fleet car. It is because people are prepared to spend their own money without driving the car. None of these customers have taken a test drive. They've seen the car because we've taken the pre-production units that we had on a roadshow around the country, and that's generated a lot of demand immediately.

"The fleet demand will come once people can test drive it and once it's available for when fleet contracts are concluding. EV6 is in that core fleet segment, the user chooser, increasingly favouring electrified products. Why wouldn't you consider an EV6? I think it will be pretty balanced between fleet and retail. What we're seeing of those orders right now, is 80% retail and 20% fleet. In its first full year on sale, I'd expect to see pretty well 50/50."

EV6 is far more affluent and premium than Kia's other EV models, but Philpott believes what e-Niro has done for the brand is to make it easier to make that uplift. "After Tesla, who would people name as strong electric vehicle manufacturers right now? You'd probably go Kia, Hyundai, and Volkswagen. Until recently, we were the number two brand for electric vehicles. We're now number three in the country.

"Models such as the Soul and e-Niro have established us as a credible leader in electric vehicles. People will talk about Tesla all day long because they were the first all-electric brand and a very aspirational one at that. What we are is a very credible manufacturer of electric vehicles - that we're now adding much more aspirational models to."

There is still more to come fleet-wise as well, with the all-new Sportage next year. "Sportage has been the backbone of our growth for the last decade. It is really important for us [that] it will come with petrol and diesel, plus HEV and PHEV versions. The trend to electrification is clear - all the market growth is coming from electrified products."

So, with the combination of the first full year of EV6 sales, the availability of the hottest GT version, and launching the new Sportage in Q1, 2022 is looking like it's going to be another great year for Kia.