Mazda's profile in the fleet sector has dwindled over the past decade, but a number of new-generation models could be about to reverse the trend. Simon Harris speaks with managing director Jeremy Thomson. 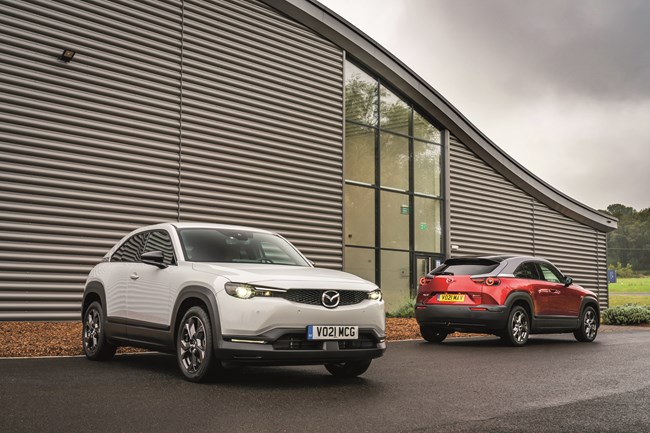 Jeremy Thomson's tenure at the head of Mazda UK must be one of the longest in the automotive industry.

Approaching 13 years in the role of managing director, he previously held positions as sales director, marketing director and fleet director at the company he joined 20 years ago. Before that, he held various sales and marketing positions at Ford Motor Company.

When he arrived at Mazda, the brand was undergoing a transformation. It was about to launch its long-lived 'zoom-zoom' marketing campaign, which led to Ford selling its stake in the company. After that, Mazda embarked on a strategy of reducing weight and improving efficiency in its new cars, starting with the CX-5 in 2012, followed by the Mazda6.

That generation Mazda6 is still on sale, in the twilight months of its life, and the balance of Mazda's sales is heavily biased towards retail compared with when it was introduced.

Exchange rate trends that penalised goods produced in Japan meant Mazda was no longer able to participate in the fleet sector as it had done while ensuring the business was on a secure financial footing, and rather than chase volume for market share, the company was pragmatic and reduced its presence.

While its product range has appealed to driving enthusiasts for 20 years - with an enduring relationship for the two-seater MX-5 - there have been fewer reasons for companies to give Mazda a place in their businesses.

Diesel cars have become less attractive in recent years since the introduction of the WLTP fuel consumption measurement, and while Mazda's Skyactiv-X petrol engine has seen petrol CO2 emissions reduce further, there has been little to appeal to those wanting to reduce BIK tax with electrification.

Thomson tells us this is already changing with the introduction of the MX-30 EV earlier this year, and could be set to shift further with more electrified vehicles on the horizon.

And he says the brand is in good shape as we continue to emerge from the worst of the Covid-19 pandemic.

Sales and profits declined during the pandemic but there are now signs of recovery, and the company expects to see global sales return to 2020 levels by the end of this year.

European sales dropped 32% in the previous fiscal year, although Thomson says Mazda is committed to the European region and the UK is a key market.

"The UK car market is recovering and our forecast is better than the industry outlook," he says. "And we've announced plans to accelerate the electrification of our models.

"We're experiencing pent-up demand for cars, and while we don't expect to catch up all of the lost sales from the previous 15 months, we do expect to perform strongly this year."

He says when the pandemic started to have an impact in late March 2020, the UK operation moved quickly to protect its dealers by introducing regular remote communication methods and generating consumer offers with guaranteed dealer margins.

Mazda, according to Thomson, moved to a Covid-secure trading environment, removing cost and protecting new car stock. "Since the pandemic struck, we've suffered zero dealer failures due to financial issues, partly because of the government's support programme for businesses, but also some of our own initiatives," he says. "It has meant our dealers have emerged stronger and in a financially secure position.

"The SMMT is predicting a 30% improvement in the 2021 new car market, but there are still some Covid caveats with bumps expected in the road ahead and barriers to purchasing.

"We've had strong consumer demand since April, and overall registrations have been similar to the period before Covid in 2019."

Thomson says Mazda's sales performance for the first half of 2021 is up 55% on last year's turbulent spring crash, against an industry improvement of 39%.

"Although it largely mirrored what we had through our membership of the EU, without it we would have faced tariffs of 10%. All of our production comes from Japan, but from 2025 we will be importing with zero tariffs."

Mazda has also reviewed its environmental commitments and stepped them up. Its vision of the future has evolved in the past four years, with a commitment to be carbon neutral by 2050 and increasing the number of electric cars sold by 2030.

"In 2007," Thomson says, "we began developing a scaleable architecture designed for a new range of petrol and diesel engines, which began with the introduction of the CX-5 in 2012.

"In the last six years, we launched nine models from this architecture, most of which are in the UK. But since the launch of the Mazda3 in 2019, we've been developing the criteria for a new generation of cars.

"We're improving the platforms in line with expectations of increasing electrification. Our ambition in 2017 was that battery electric vehicles [BEVs] would be 5% of our volume by 2035, with ICE-base power unit for 95% of cars.

"We've now updated our ambition, and [now] target 25% of our line-up [to] be BEV by 2030, while the remainder will have some form of electrification.

"In 2017, we committed to a 90% reduction in CO2 emissions in 2050, but now by that date we aim to be entirely carbon neutral in all aspects of the business."

Mazda's first fully electric production car, the MX-30, is compact and a rival for models such as the Vauxhall Mokka-E and Peugeot E-2008. But its maximum range falls short of these rivals because Mazda believes smaller capacity batteries are less of a drain on the Earth's resources.

However, there will be a broader choice of BEVs from Mazda by the middle of the decade, although it will produce vehicles with a number of electrified options.

"ICE will power most of our cars globally in 2030," says Thomson. "We remain committed to producing the perfect ICE engine when it comes to emissions and efficiency. We are also developing some six-cylinder engines."

For Mazda's small and medium car family, there will be full hybrids, BEVs, as well as hybrids using a rotary engine as a generator, plus PHEVs.

For its larger cars, Thomson says there will be a new vehicle architecture to support mild hybrid and plug-in hybrid, as well as ICE.

"We're talking about the future in terms of a reboot of Mazda's commitment to the fleet sector, and I'm sure the ratio of retail to fleet - currently about 72% in favour of retail - will start to rebalance.

"Over the next five years, we will launch three BEVs, five plug-in hybrids and five hybrid models from our new scaleable architecture. We can't say much about this yet or which will be coming to the UK but watch this space.

"We're developing a dedicated platform for EVs. These first models will arrive in 2025.

"We are also looking at renewable fuels to decarbonise the legacy fleet as well as forthcoming ICE vehicles. We joined the E-Fuel Alliance in Europe to help develop synthetic fuels."

I ask him whether there is still room for a conventional saloon such as the Mazda6 in the line-up, knowing that the days of the current car are numbered. "We'll continue to produce the Mazda6 as long as it's supported by demand," he replies. "But I think it's more important to have a strong range of SUVs."