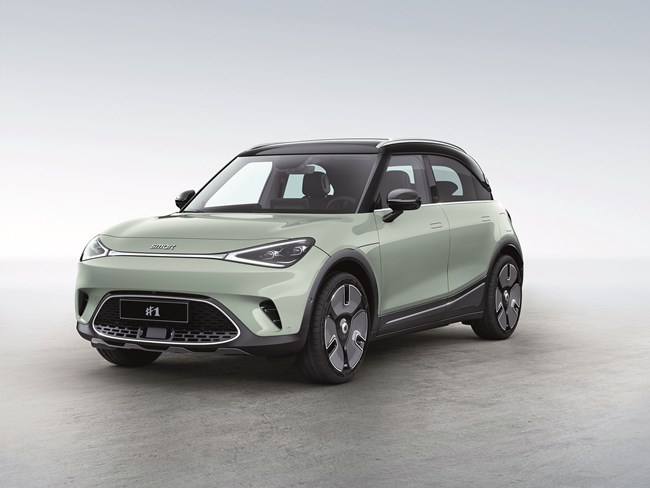 Despite only being in his position for a matter of weeks when we spoke, Jenkins brings a wealth of experience to Smart from more than 24 years in the fleet industry. Jenkins' highlights include a robust track record of executing and enhancing fleet strategies for multiple OEMs, most recently as head of fleet and remarketing at Suzuki GB and national fleet sales manager at Maserati North Europe.

Despite the brand's full electrification back in 2019, Jenkins freely admits Smart's previous models might have limited its appeal to fleet.

He says: "I think Smart has been driven by product but has perhaps been limited by its offering in the past. With the Fourtwo and Fourfour, of course going electric helped, but not having the practical range hindered its offering to fleet previously.

"The difference of course with #1, is the range is up to 273 miles, and as you can see it's a much larger vehicle sitting and competing in the compact SUV sector that's growing expedientially. With the Smart brand resetting from now, the #1 puts itself into a very different position to where Smart models have
been historically."

Jenkins' belief is that the fact the #1 is the result of a tie-up with Mercedes and Geely will be a positive for its fleet perception.

He says: "Hopefully fleet will have already an idea of what we're trying to do in relaunching the Smart brand. I think with the joint venture with Mercedes-Benz and Geely - the best of two enormously strong brands, in terms of design and product, have evolved into what has become the #1.

"It means that the practicality of getting this car into the fleet market should never be in question. If you look at #1 as an overall package, in terms of its range, its charging capacity, its advanced connectivity, I think it ticks all the boxes to be very practical in certain sectors of the fleet market."

The launch of #1 in early 2022 is a fleet highlight for the Smart brand. I asked if he could provide any ideas of anything else they are working on with regard to fleet plans
for 2022.

He says: "Fleet plans are at a very early stage because the physical car doesn't arrive until next year. However, of course my role is to build the strategy for Smart moving forward in the fleet sector. There is no doubt that there are certain sectors that this car will naturally fit into. Such as, for example, the public sector, into the SME marketplace, and the local fleet marketplace, via our very experienced corporate team sitting within the Mercedes network that we will have with Smart.

"So, naturally this car will sit very well in certain sectors, but equally there are certain segments of the market that we don't want to entertain. That is certainly short-cycle areas, or any area in fact that will distress in any way, shape, or form, the residual value position of this car, which I'm working on maximising before launch."

Smart is a bit of a chameleon brand, it has already reinvented itself once when Mercedes took control - this is the second time around. So how are they going to get the message across that it's changed from a two-car city brand to an SUV for the fleet market?

Jenkins says: "I think it's fair to say that from a product position, the car will speak for itself. Of course, the strategy that we will employ will involve very close relationships with the leasing industry and certainly through product evaluation - being able to demonstrate the car physically once we get them into the country.

"I think the car will turn a lot of heads, more importantly I think it will be received very well by the leasing industry, with a very strong residual value proposition. It combines two things, a great curb appeal and emotional attraction. In addition, the great thing about it is its connectivity and space inside. That is a massive surprise for just about everyone who has got into it.

"As you know I've been working in the fleet industry for a considerable period of time. So I've been reengaging with my colleagues in the lease industry and the industry guides, which is key to this. Of course, there will be lots of strategies that we will follow in terms of our marketing, on a localised and national level. From a fleet perspective, everything will be about relationships."

Knowing it is still early, does Smart have any idea of the fleet/retail mix for the Smart #1?

He says: "What I will say, is we're not going to prioritise retail over fleet. The initial cars will service the natural retail demand in the early days. However, there are no restrictions that we have in place to say we will do a certain percentage of retail or fleet. This is because the retail and fleet journeys that people make are often very similar. For us, it's more about ensuring the car is sold at a profitable level, our retailers are well rewarded, and our customers will come from various walks of life.

"If there's lots of interest from fleets, or personal contract hire, which as we know can combine fleet and retail, then we will follow that accordingly. We're not going to put obstacles in the way to stop people purchasing the car. Instead, we'll be encouraging both retail and fleet.

"We've designed a system with our retailers where they will be able to facilitate fleet customers and local fleet customers. Where that ends up, I would closely suggest is aligned with the marketplace as a whole.

"We don't intend to discount this car heavily, in fact quite the opposite. For me, it's about a consistent strategy, so the leasing industry in particular understands the premise that it will have a very strong residual value and that it will be attractive both emotionally and practically for both fleet and retail customers. Whatever that means, it's too early to say now."

Despite physical cars not arriving until next year, Jenkins still has an idea what the #1 fleet models will be.

He says: "I would suggest it will be an even mix between the Pro Plus and Premium trims."