Suzuki is about to embark on a new model offensive to make the brand much more appealing to fleets and user choosers. Simon Harris spoke to head of fleet sales Graeme Jenkins. 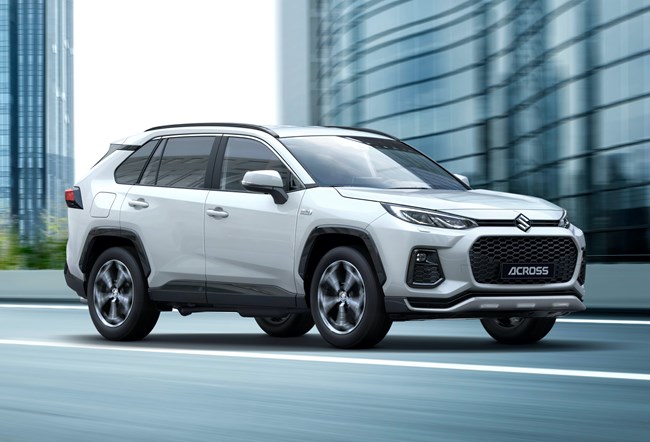 Suzuki has been in the news in recent weeks following details of a new plug-in hybrid SUV that will launch this autumn in the UK.

It follows a partnership with Toyota formalised a year ago, with an agreement to cooperate on autonomous technology development, as well as share products in particular regions.

It means that while the current Suzuki range - with the exception of the Jimny - has adopted mild hybrid technology (where a small battery and electric motor provides some assistance to the engine to reduce fuel consumption), it will introduce a new plug-in hybrid SUV and full hybrid lower-medium estate before the end of the year.

Suzuki's plug-in hybrid, called the Across, is a made-over Toyota Rav4 (also due to be launched as a plug-in hybrid), while the new estate model, the Suzuki Swace, will be based on the Corolla Touring Sports, and will be built at Toyota's UK plant in Derbyshire.

It is a coincidence that is not lost on Graeme Jenkins, who joined the brand at the end of 2016, and had spent 17 years at Toyota, including during the time when it was pioneering hybrid technology with the Prius.

He says: "I was working at Toyota when the company was launching the Prius, and the grounding I had at Toyota has given me an advantage in understanding the new hybrid products."

Suzuki is now preparing for the introduction of the new models, and their particular appeal to company car drivers and fleet operators.

The current range - Ignis, Swift, Vitara and S-Cross - now offer mild hybrid power, which uses an electric motor to assist the engine when accelerating, but doesn't drive on electric power alone, unlike a plug-in hybrid or full hybrid.

The preparations were affected by spring's coronavirus lockdown, but Jenkins says it also gave the company a pause to reassess how it was doing  business.

He says: "We looked at everything we were doing and challenged ourselves on what needed to be done, and it gave us the time to look at some areas of the business that we otherwise might not have had. We really wanted to ensure everything was fit for purpose.

"We have come back a bit stronger, better organised and ready for the new challenges. Supply hasn't been affected too much and new products are coming in as they should be."

The company has taken the Celerio city car and Baleno small hatchback off-sale, while the Jimny 4x4 is no longer available to order in 2020. However, Jenkins says these decisions will have had little impact on fleet business.

"If we look at it from a fleet perspective, the Celerio and Baleno were never big in this sector,' he says. "What we had was two cars in the A-sector and two cars in the B-sector. The Ignis remains and the Swift remains, and we have the Vitara and S-Cross in the SUV and crossover class.

"Our ambition is to have an entirely hybrid range. So, if you exclude the Jimny, a unique vehicle that we sell in very small numbers, we now have a completely hybrid range.

"We believe it is more in line with where the market is going."

The two Toyota-based models are expected to bring increased sales with new customers coming to the brand.

Jenkins says: "The OEM cooperation with Toyota gives us entrants into two sectors that we weren't previously participating in. One is a medium car called Swace, which will bring new customers without question. This is a full-hybrid vehicle in wagon format.

"The Across is a medium-to-large SUV, and is also in a segment that we don't currently trade in. These will bring organic, incremental sales to the brand, so our offering to various fleet customers will be much wider.

"The Across has got great kerbside appeal, and very much a Suzuki look to it. I think having that car, which will be very different for us because of its size, while it will be considerably more expensive than other models in our range, it will be very competitive in its segment.

"We think around 75% of our sales of the Across will be bought with some kind of company money."

The first examples of the Across are expected to arrive during September, with the Swace following around six weeks later, but limited volume is available for 2020, with greater availability planned during 2021.

Jenkins added: "It will be interesting, as these vehicles are new to us. The positioning will be key, and our cost of ownership manager will have his work cut out to ensure the residual values are where we need them to be.

"We look forward to bringing those to market, as they are a great opportunity for the brand and in new segments."

Jenkins joined Suzuki at the end of 2016, and has helped transform the way the brand has participated in the fleet sector. While working on the fleet team at Toyota, he left to establish a fleet team at Maserati UK with the introduction of the Ghibli and diesel-powered variants.

He says: "I had the remit of launching Suzuki into the fleet market. We had tinkered around the edges up to that point. We had done some forms of fleet sales but had never really got involved with the leasing industry.

"The first job was to establish good relationships with the leasing companies. We recruited two contract hire and leasing managers. If we look at the raw numbers, they have gone up from about 4,500 [units into fleet] when I joined. At the end of last year we were at 9,950 - a 1.2% market share. What is good about that is there is virtually no short cycle business in there whatsoever.

"The arrangements we have with some of the major leasing companies are excellent, and the Swift and Vitara have hit the sweet spot."

He adds that when he joined Suzuki, the brand didn't participate in the potentially lucrative Crown Commercial Services framework, which supplies fleet vehicles to public sector organisations. Suzuki was added at the next opportunity for brands to be included, and Jenkins expects this area to be responsible for further growth in sales.

"That is an area that we will be targeting, and we will be more involved in the public sector marketplace," he states. "Historically, when some of these tenders have been released, we haven't been able to participate from a resource perspective.

"We have evolved the Suzuki Business Partner network, which was launched in July 2019. It is a dedicated number of our retailers that have specific resources to engage with
fleet customers.

"We are happy with our progress and we continue to develop it. There is lots more we can do and the new products should provide us with some fantastic opportunities. But the key for us is choosing the battles we fight very carefully. We will be emphasising the local SME business and public sector business. From a product perspective, we know we have some winning combinations."

While diesel sales have been declining sharply, Suzuki, which never had its own diesel engine, gave up on it in 2017, and perhaps hasn't been as adversely affected as some brands with a heavier dependence for sales.

"We moved over to a complete petrol range the best part of three years ago, with a long-term view to moving to hybrid," says Jenkins.

It is clear that he is excited by being able to offer the new Toyota-based products, although with his long period at Toyota he feels he is in familiar territory.

"I still stay in touch with my colleagues and friends at Toyota, and it is a great organisation," he says. "It gave me a great insight into the development of hybrid technology."