The new Land Rover Defender took top honours in the Driver's Choice category of the Business Car Awards, against much sportier opposition. 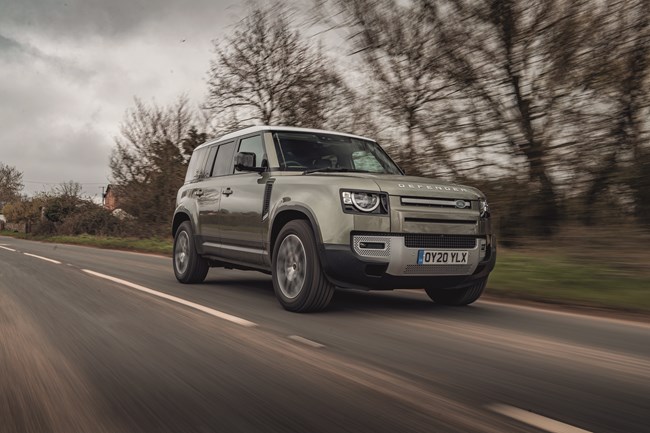 The automotive landscape was missing one of its icons for four years - until an all-new Land Rover Defender was launched in 2020.

Unveiled at the 2019 Frankfurt motor show ahead of customer deliveries in 2020, the new model retains the rugged appeal of its predecessor, but has been designed and developed for today's customers and has a much broader capability than its off-road focused predecessor.

Launched with Land Rover's trusty Ingenium 2.0-litre petrol engine, it has now been superseded by the latest member of the Ingenium family, the new 3.0-litre six-cylinder engine with mild-hybrid technology.

Petrol variants include mild-hybrid technology, with a power output of 300hp in the P300, while since its launch some exciting new powertrain options have been announced. The P400e plug-in hybrid combines the 2.0-litre petrol engine with an electric motor to deliver a total power output of 404hp, but with CO2 emissions from 75g/km. That means a BIK tax band starting point of 18% for the current tax year.

The very first plug-in hybrid Defender makes it a unique proposition in vehicles with authentic off-road capability, dealing with the extreme terrain you would expect of Land Rover's most capable model but significantly reducing the car's environmental impact.

The Defender is available in five, six or seven-seat variants, and while the interiors are designed to endure the wear and tear of being a workhorse vehicle, the car is also extremely sophisticated, including intuitive connectivity with its Pivi Pro infotainment system, and is capable of downloading over-the-air software updates.

Like its predecessor, the new Defender is available as a commercial vehicle, in both 90 and 110 variants, called Hard Top.

Previous contenders for the Driver's Choice award - and the Defender's rivals this year - were performance-focused vehicles. Judges said the Defender's much-anticipated appearance in 2020, as well as its breadth of ability, made it the vehicle company car drivers wanted to have on their driveways more than any other.

Andrew Jago, head of fleet and business sales at Jaguar Land Rover UK said: "We are delighted that the new Defender has won the Driver's Choice category at the Business Car Awards.

"The new Land Rover Defender is one of the most anticipated new car launches of 2020, and this accolade is welcome recognition of its strong product appeal and extreme capability.

"The Defender offers business users a wide choice of options, including 90 and 110 Hardtop variants for commercial use, and plug-in hybrid powertrain technology with low benefit-in-kind taxation."