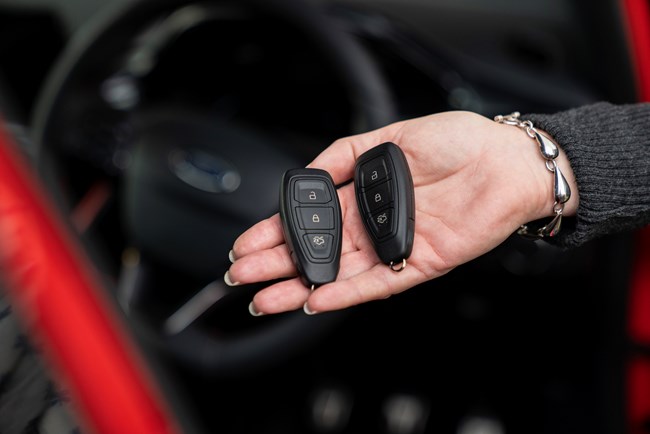 Ford has launched new keyless entry fobs for its Fiesta and Focus, which it says have been developed so as not to be vulnerable to car thieves.

It says the new fobs disable themselves when not in use to prevent illegal hacking.

There has been a widespread increase in thefts of cars with keyless entry systems, with thieves using a relay system to extend a signal from a key fob in a home to a vehicle parked outside.

Ford says the new fobs feature a motion sensor that detects when they have been stationary for more than 40 seconds and triggers a sleep mode, which will not respond to attempts to hack their signal.

Moving the fobs, designed to operate only within a two-metre radius of the vehicle, will restore full functionality by the time the driver reaches the vehicle, Ford says.

The new fobs are already standard with the Fiesta and Fiesta Van, and will be with the Focus from next month.

Ford is also offering an after-market upgrade service for drivers who already have a current generation Fiesta and Focus, priced from £65 for the former and £72 for the latter, plus 0.9 hours labour to programme and test.

The fobs will be rolled out to the rest of Ford's range over the next two years.

Ford security specialist Simon Hurr said: "The online availability of devices which have no place in public hands has long been a problem for Ford, our industry and crime fighters.

"We are pleased to respond with a simple but effective solution - swiftly implemented to help protect owners of our top-selling cars."