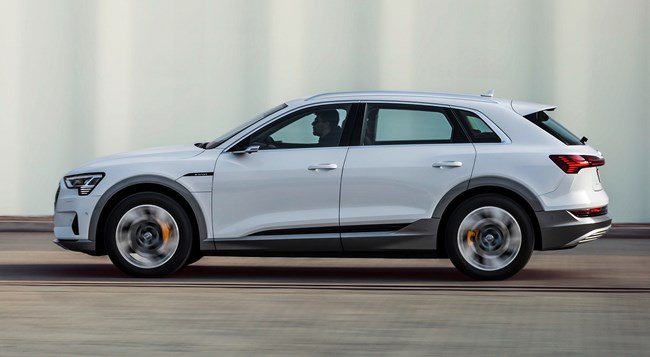 Audi is to introduce a new, entry-level version of its E-Tron electric car.

Badged the 50 Quattro, it will sit below the existing 55 Quattro in the range.

The 50 Quattro will feature a 71kWh battery, offering a range of up to 186 miles on the WLTP test cycle, which compares with the 95kWh and 248-mile range offered by the 55 Quattro.

The 50 Quattro will be capable of charging at up to 120kW at fast charging stations, meaning an 80% battery charge will be possible in 30 minutes.

It will also support a charging capacity of up to 2.3 kW with a 230 volt domestic outlet and up to 11 kW when connected to a 400 volt industrial charge point.

An optional connect charging system will also be available, adding functions such as off-peak charging, allowing drivers to benefit from variable electricity rates by charging at more inexpensive times.

The 50 Quattro is set to go into production later this year, and become available in the UK early in 2020. Prices are yet to be announced.