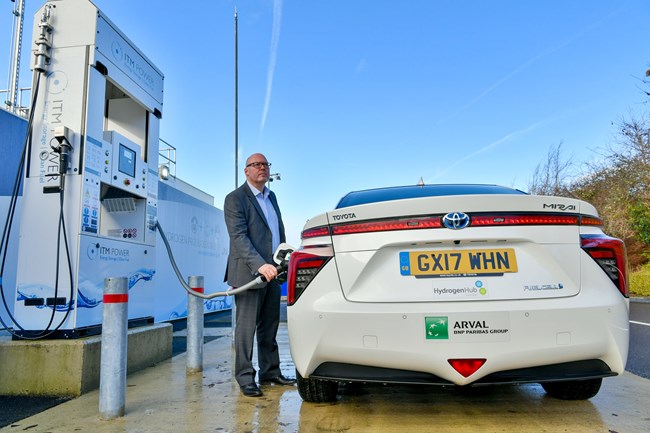 A series of events aimed at raising awareness of hydrogen cars throughout the UK has been announced by leasing company Arval.

The Arval Hydrogen Roadshow - Driving Innovation, Investment and a Cleaner Future will visit five locations, starting with Swindon on 12 April, followed by Oxford on 17 May, Leeds on 28 June, Birmingham on 16 October, and London later in the year.

Arval says the events will allow it to share its expertise in hydrogen cars, built through its involvement in Swindon-based project the Hydrogen Hub, which researches the viability of fuel cell technology for a range of domestic, commercial and transport applications in real-world conditions.

Each roadshow will feature talks to invited delegates from hydrogen experts, fleet operators and car manufacturers, before an afternoon session open to all, focusing on the cars.

Arval senior business manager Paul Marchment said: "Thanks to the work we have done with the Hydrogen Hub, we have considerable expertise in running hydrogen cars. It is our aim and passion to share this knowledge through these roadshows.

"At each location, we want to reach audiences that together can help drive positive change - for example, businesses, the public, local politicians.

"We want to show them hydrogen vehicles from manufacturers such as Toyota and Hyundai, and explain how the technology works. Once you know more about the technology, you are more likely to adopt and champion it."

Marchment said that currently the Hydrogen Hub is running seven hydrogen cars with a range of fleet customers.

He added: "While in its infancy - and notwithstanding that vehicle production needs to increase to cut purchase price, and that the refuelling infrastructure needs to improve - we believe that with the right backing from the public, businesses, government and manufacturers, the demand for hydrogen will increase and that will help drive a more sustainable future for all."

Hydrogen Hub manager Clare Jackson said: "We are very excited to offer the opportunity to businesses, local authorities and the public to learn about hydrogen vehicles and test the technology.

"Having the ability for zero-carbon tailpipe emissions while not requiring the consumer to change their behaviour in any way, we hope the events will raise awareness and demonstrate the benefits of the technology.

"We need to grow the market for hydrogen and fuel cell industry and ensure that the UK remains at the forefront of this development as it can play a very important role in decarbonisation of the UK economy."