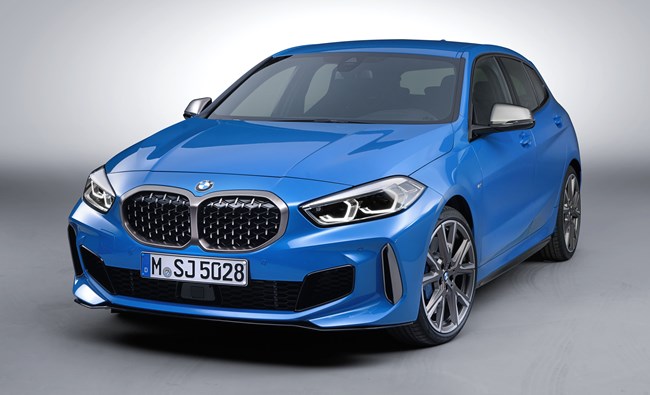 BMW has unveiled an all-new version of its 1 Series lower-medium car.

The third generation of the model, it is the first to come as standard with front-wheel drive rather than rear-wheel drive - four-wheel drive is also available.

Key exterior styling features include a new headlight arrangement and a larger grille.

Compared with the outgoing model, the new 1 Series is 5mm shorter, with a 20mm shorter wheelbase, but 34mm wider and 13mm taller.

BMW says interior space has been increased, with rear passengers getting an extra 33mm of knee room, and 19mm of extra headroom in cars specced with the optional panoramic sunroof.

Elbow room is said to be up by 13mm for rear passengers, and 42mm for the drive and front passenger, while boot capacity is up by 20 litres to 380 litres.

The new 1 Series is the first to be available with an electric tailgate.

There are three main equipment grades - SE, Sport and M Sport - along with a range-topping M135i xDrive model.

BMW says that compared with the outgoing range the diesel engines feature fuel consumption and CO2 emissions reductions of around 5%, while the entry-level petrol emits 29g/km less CO2.

Other options include a head-up display and park distance control.

Standard infotainment is via an 8.8in central touchscreen and a 5.7in instrument panel colour display, but these can both be upgraded to 10.25in screens.

The new 1 Series is available to order now, with the first deliveries expected in September. Prices for the range start at £24,430.