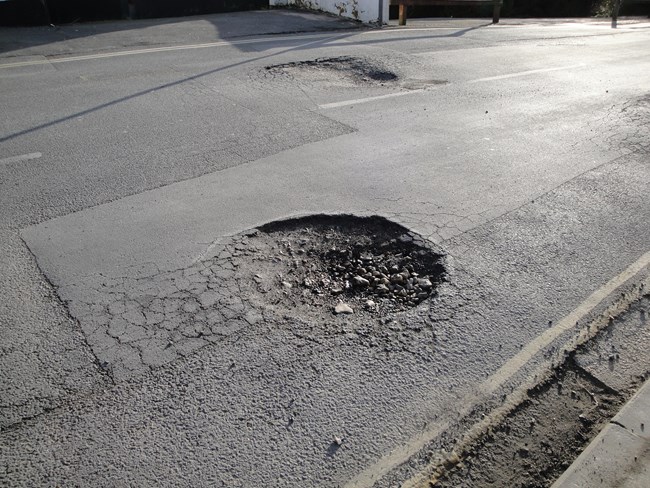 The number of pothole-related breakdowns in the UK in the first quarter of 2019 was lower than in the same period in the previous two years, according to the RAC.

The motoring organisation says the figure could mean the quality of the UK's road surfaces is improving.

Damaged shock absorbers, broken suspension springs and distorted wheels accounted for 1.5% of the breakdowns the RAC attended between January and March this year, compared with 2.3% in 2018 and 2.7% in 2017.

The latest figure is higher than those for the final two quarters of 2018, but the RAC says this is to be expected as freezing winter conditions typically cause the greatest incident rate in the first quarter of the year.

The RAC says the reduction in pothole-related winter breakdowns compared with previous years could be due to the absence of harsh winter weather in much of the country, along with extra funding for councils in the chancellor's budget, preventing further deterioration of road surfaces.

Despite the improvement, the RAC says drivers are still 2.3 times more likely to suffer a breakdown from hitting a pothole than when the data was first analysed in 2006.

RAC spokesperson Simon Williams said: "Our data gathered from our patrols' work at the roadside encouragingly shows there has been a slight improvement in the quality of road surfaces around the country as fewer vehicles have been stricken by broken shock absorbers, suspension springs and distorted wheels.

"This will almost certainly be in part due to the mild winter weather that has helped to prevent road surfaces that were already damaged breaking down further.

"Our findings seem to correlate with data from the Asphalt Industry Alliance's Annual Local Authority Road Maintenance survey which shows that for the second consecutive year, local authorities' highway maintenance budgets have increased by almost 20%.

"But while more local authority highway maintenance funding seems to be making a positive difference there is still a long way to go before their roads are brought back to a truly fit-for-purpose state."