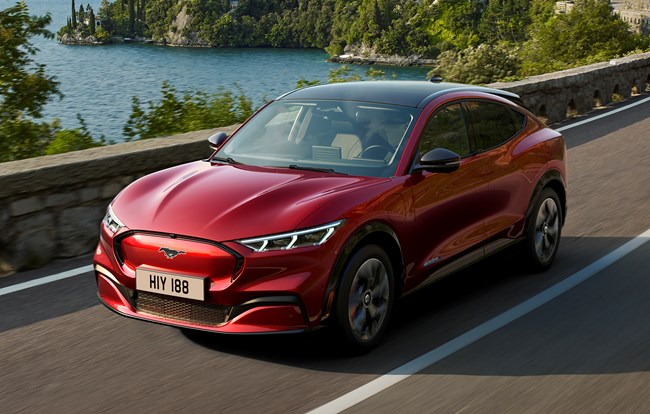 Ford has revealed a new all-electric SUV, which it claims is inspired by its legendary Mustang performance car.

The Mustang Mach-E will be available as a regular model, and also as a performance GT model with 465hp.

Ford says the regular Mustang Mach-E will be available in standard range and extended range variants, with battery capacities of 75.7kWh and 98.8kWh respectively.

According to Ford, the extended range version, which will come with a 337hp electric motor, has a targeted driving range of more than 370 miles on the WLTP test cycle.

Onboard technology will include a next-generation version of Ford's Sync infotainment system, running on a 15.5in touchscreen, and with wireless Apple Carplay, Android Auto and Applink connectivity.

Other available equipment will include a B&O sound system and a panoramic glass roof, while drivers will also be able to unlock the car using a smartphone.

Ford says there will be space for five passengers, 402 litres of rear boot space, and also an extra storage compartment with 100 litres of space under the bonnet.

The Mustang Mach-E is due to arrive late next year. Prices and full specs are yet to be confirmed.