Reboot for Audi A3 saloon 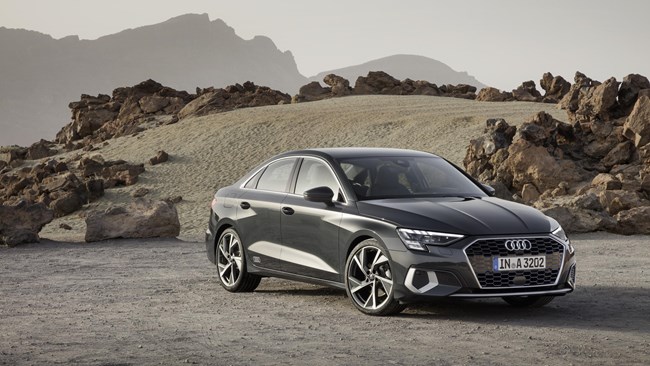 Audi has revealed the first images and specifications of the new A3 saloon ahead of UK orders opening on Thursday (23 April).

Like the recently introduced A3 Sportback, the new A3 saloon features upgrades in technology, equipment and engines.

Although its wheelbase is the same as its predecessor, the new A3 saloon is 4cm longer and 2cm wider, and the car is also slightly taller than before.

This has helped to elbow room elbow room and has yielded an increase in headroom of 2cm in the front, helped by the repositioned driver's seat. Luggage space remains the same as the previous A3 saloon at 425 litres.

Improved aerodynamics result in better fuel economy, and the model will be introduced with a choice of three engines: two 1.5-litre TFSI units and one 2.0-litre TDI.

The 35 TFSI, a 1.5-litre direct injection engine, incorporates cylinder-on-demand technology and delivers 150hp. Using a new six-speed manual transmission, it is capable of returning up to 48.7mpg with CO2 output of 132g/km in Sport specification, according to WLTP test data.

An alternative version of this engine, using the seven-speed S-tronic automatic, combines cylinder-on-demand efficiency with a 48-volt mild hybrid system capable of recovering energy during deceleration, supporting the engine with up to 50Nm (37lb-ft) of additional torque under acceleration from low engine speeds and allowing the A3 saloon to coast with the engine switched off.

A 1.0 TFSI three-cylinder engine with 110hp will be included in the next phase of engine introductions, and will be available with either manual transmission or as a 48-volt mild hybrid version with S-tronic dual-clutch auto.

The 2.0 TDI with 150hp also works in conjunction with a seven-speed S-tronic, and offers the potential to return up to 62.8mpg with CO2 emissions of 119g/km. Later in the launch cycle a 116hp version of the four-cylinder TDI linked to the highly efficient new six-speed manual transmission will power a 30 TDI version.

Other highlights of the new model include the adoption of fully digital cockpit with the touch-screen MMI Touch dashboard screen, and the introduction of advanced new lighting configurations that give each variant a specific light 'signature'.

The range will launch with Sport, S Line, Edition 1 and Vorsprung grades, with prices starting from £26,870 OTR for the 35 TFSI Sport with manual transmission, rising to £32,220 for the 35 TDI S line S-tronic. Deliveries will begin in the summer.