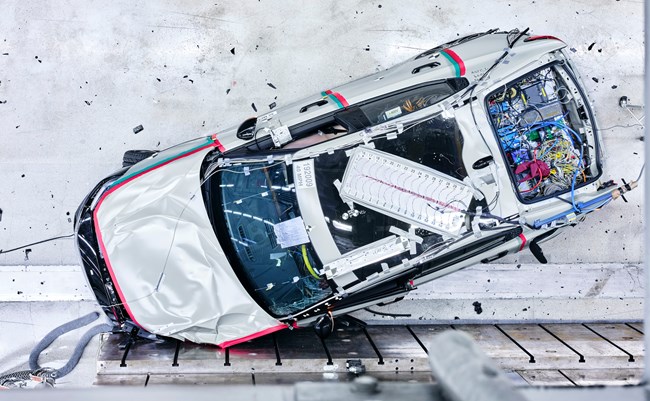 The Polestar 2 will be the first Volvo Car Group model to feature new Acoustic Vehicle Alert System (AVAS) technology, and the first to be fitted with new front-inner-side airbags when it's launched later this year.

The all-electric Polestar will be the second vehicle launched by the brand, and is a five-door fastback pitched against the Tesla Model 3. The Polestar 2 will share its 408hp electric powertrain with the forthcoming Volvo XC40 T8 Recharge.

"Safety is of paramount importance for Polestar," said Thomas Ingenlath, chief executive of Polestar. "We are directly linked to Volvo Cars and with that comes [its] famous reputation for outstanding safety technology. So of course, Polestar cars are designed to be among the safest in the world and we are really proud of that."

The battery pack will be enclosed in aluminium as well as contained entirely within the floor structure of the Polestar 2.

In a crash, the battery pack is automatically disconnected from the rest of the vehicle to ensure there is no live connection, while the Polestar 2 features the 'SPOC block' (Severe Partial Offset Crash) - a deflective solid aluminium block housed on the bottom edge of the front firewall on either side of the car, designed to minimise intrusion of the wheel and other objects into the cabin and towards the battery pack during partially offset frontal collisions.

The Polestar 2 features unique and specially developed external sounds as part of its acoustic warning system. Designed to be recognisable, non-intrusive and natural-sounding, the AVAS has been engineered according to very specific parameters, with a pending patent.

"We deliberately did not want Polestar 2 to sound like a robot or symphonic spaceship," said Ingenlath. "We wanted very natural, subtle sounds that simply let pedestrians know the car is moving. At the same time, we wanted Polestar 2 to sound slightly unique and become identifiable as a Polestar, while remaining relatively simple."

The Polestar 2 also features inner-side airbags fitted to the front seats. These new airbags, which are standard fitment in all markets, add an extra layer of protection for the inner limbs of the front occupants who are now individually protected from both sides, as well as from the front.

All available safety systems and assistance features are fitted as standard in the launch edition, while the Polestar 2 also debuts a new generation of Advanced Driver Assistance System (ADAS) technology, which will make its way into other products from the Volvo Car Group later.

In its latest guise, Pilot Assist features location-based enhancements which adjust the amount of assistance in acceleration based on the car's actual position.

Detection systems for other vehicles in front, behind and in the blind spots of the car, as well as pedestrians and cyclists ahead of the car, are all coupled to steering assistance and autonomous emergency braking (AEB) to help ensure that interactions between other road users and Polestar 2 are kept as safe as possible at all times.