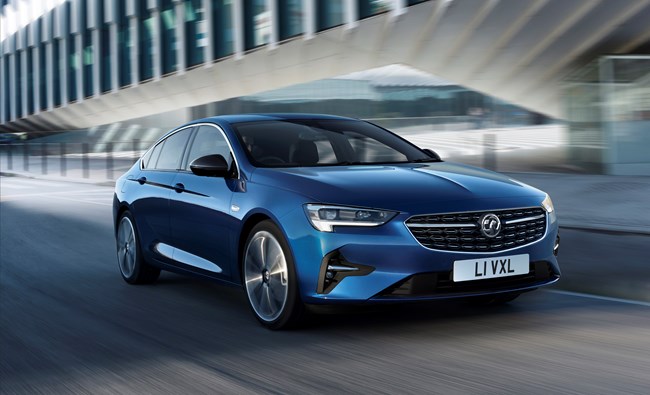 The updated Vauxhall Insignia, with a new RDE2-compliant diesel range, is now available to order, priced from £23,120 on the road.

Vauxhall is claiming best-in-class CO2 emissions and fuel economy, as the Insignia is refreshed for the 2021 model year, due in showrooms this summer.

The update heralds the introduction of the fuel-efficient 1.5-litre diesel engine, launched in the facelift Astra last summer. The three-cylinder engine produces 122hp and has CO2 emissions of 120g/km under the new WLTP.

The three-cylinder engines are up to 50kg lighter than their four-cylinder predecessors in the outgoing model. Above these are two 2.0-litre petrol engines with 200hp and 230hp, as well as a 2.0-litre four-cylinder diesel, which will be introduced later this year.

The new lamps use 84 LED bulbs in each headlight, instead of the previous 16, allowing the camera-connected control unit to react faster and with more precision to every traffic situation.

A new rear-view camera offers a clearer image of the view behind when reversing, while the Insignia carries over the safety and assistance features of its predecessor.

The optional E-Call system can be specified for new Insignia orders, automatically sending an emergency call if the seatbelt tensioners or airbags are deployed. Alternatively, help can be summoned in seconds by pressing the red E-Call button.

Ergonomically certified AGR seats are available as an option for the driver and passenger, while compatible smartphones can be charged wirelessly.