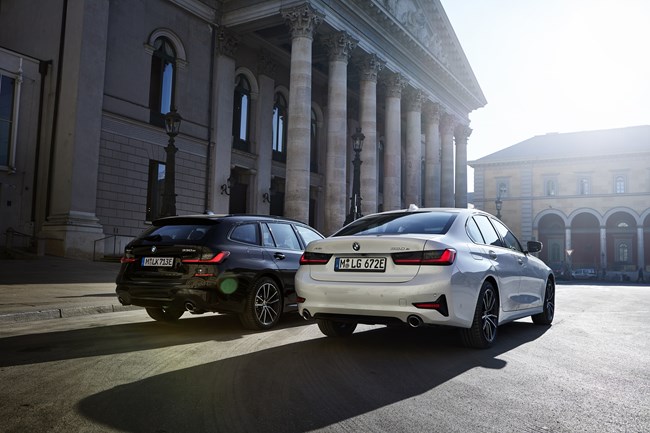 The popular BMW 330e plug-in hybrid will become available as a 'touring' estate and can be optioned with 'xdrive' all-wheel drive from summer.

The 3 series - both the saloon and estate - will also become available as M340d xdrive models, featuring a 3.0-litre diesel engine with mild hybrid assistance and 340hp.

Most important for the company car market will of course be the expanded 330e range. The 330e touring - like the saloon version - has a 2.0-litre petrol engine and a 12kWh battery for a system output of 252hp and a pure-electric range of around 40 miles. The previous-generation 330e was only ever available as a saloon.

That range drops to 34 miles for the xdrive version, or 36 miles for the xdrive saloon. These are all still provisional figures, with some further variation expected depending on equipment. Final WLTP figures for electric range and CO2 emissions have yet to be announced, but it's expected all models will fall into the 10% or 12% BIK tax bands.

Using a home wallbox, the battery on the 330e can be recharged from empty in 3.4 hours with a wallbox, or in 5.7 using a domestic plug.

When the touring and xdrive versions of the 330e launch in the summer, all new plug-in hybrid BMWs will gain a new feature where environmental zones will be detected, making the car switch to pure-electric mode automatically.

For those wanting a lot more punch from their 3 series, BMW is also launching the M340d. Rated at 49.6-52.3mpg - depending on spec - it still delivers impressive fuel economy from its six-cylinder diesel engine, but also has 340hp on tap. This is partly thanks to a 48V mild hybrid system.

The M340d has all-wheel drive as standard, as well as the M-Sport equipment that includes sporty body styling, sports suspension and relatively generous (for BMW norms) standard equipment.