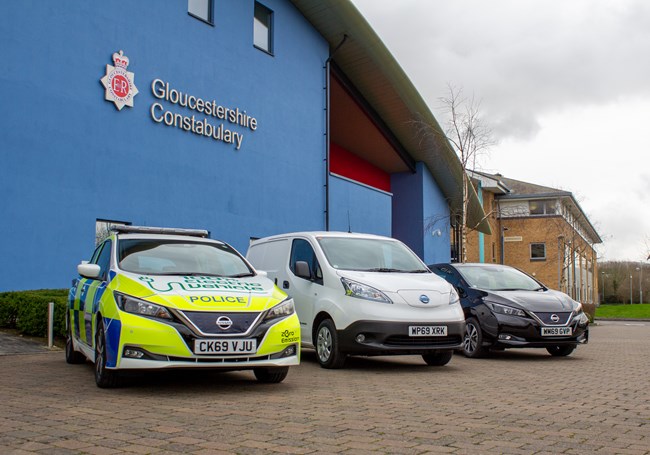 The Gloucestershire constabulary is taking delivery of 75 Nissan EVs - 65 Leafs and 10 e-NV200 vans - by May this year.

This order will make 21% of the force's fleet fully-electric, which is the most of any police fleet in the country. 11 of the Leafs will be marked vehicles.

The constabulary had previous experience of EVs, with 16-plate Leafs, and liked that the brake pads would last much longer and that the cars generally needed less servicing than conventional cars. Compared to diesel vehicles, it estimates it will save over £138,000 per year.

Head of transport services for Gloucestershire constabulary Steve Imm said: "We conducted a big fleet review of what we could replace with EVs, which led us to the figure of 21%. In two years we've managed that, and in four years we're looking to make it around 40% if the technology allows it and it's a viable option.

"There are lots of departments in the police that are either policed by staff members or the CID for example. They're not working 24/7, they're working core hours across shift patterns, and they're driving an average of 70 miles a day so we know that 180 miles will do what we need them to do."

To charge the cars and vans, 44 additional charge points have been fitted around various police buildings in Gloucestershire. These are mainly 7kW chargers to allow the vehicles to charge overnight. The Leaf e+ is rated for a 239-mile range, while the e-NV200 should be able to do 187 miles on a charge.

Gloucestershire's Police and crime commissioner, Martin Surl said: "The purchase of these new vehicles is a huge step forward for the Constabulary to reduce its carbon and pollution, and meets part of my commitment to 'a green and pleasant county' that was outlined in my Police and Crime Plan. It's a journey we've been on for five years and is part of a long-term commitment by my office to ensure our environment is considered at every opportunity.

Nissan Motor GB fleet director Peter McDonald said: "Through their pioneering work, Gloucestershire are showing how EVs can be used in all kinds of practical applications, and how with some initiative blue light fleets are able to play an active role in decarbonisation. We applaud Gloucester police forces and are proud to be working with them."