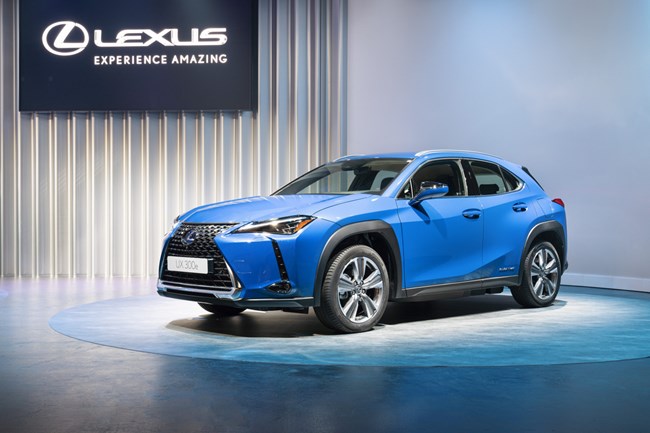 Lexus will launch its electric SUV later this year with a 54kWh battery and 186 miles of range.

Although Toyota and Lexus were pioneers for hybrid technology in mass-market cars, they've been slow to add pure electric cars to their ranges. An electric version of Lexus's compact SUV, the UX, will be the first of a number of EVs based on the group's modular TNGA platform.

The UX 300e will feature one 200hp motor driving the front wheels and a 54kWh battery pack installed under the cabin floor. On the WLTP cycle, this makes for a range of 185 miles. On a 50kW fast charger, the UX's batteries can be recharged to 80% full in 50min

Paddles behind the steering wheel allow the driver to cycle through four levels of regenerative braking.

The UX 300e is scheduled to go on sale in selected European markets from the second half of 2020 and in the UK from January 2021. Being an EV, this means that it will benefit from either 0% or just 1% BIK tax, depending on whether the car is first registered before or after April 2021.

The electric UX further differs from the normal petrol versions in a number of other ways. The suspension was re-tuned and bracing was added to cope with the added weight of the batteries. To make the most of the silent running of an EV, extra sound insulation was added and visually, the UX 300e gets new aerodynamic wheel designs and an underbody cover.

A 'LexusLink' companion app allows drivers to check the battery charge and driving range including a timer to show when they will be full and a charging schedule according to when the vehicle is next expected to be driven or when energy prices are low.