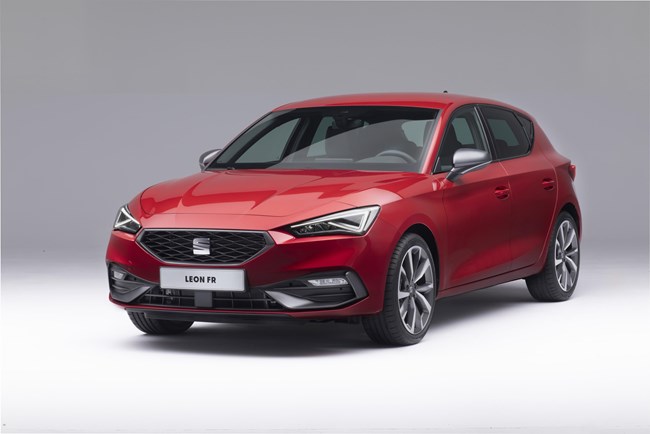 Seat has unveiled the fourth generation of the Leon hatchback at an event in Barcelona.

It features new styling in line with the Tarraco SUV, an updated line-up of powertrains including hybrids, more interior space than before and the latest generation of connectivity and safety features.

As the Seat Leon is built on the same MQB evo platform as the VW Golf, the range of engines for the fourth generation of Leon largely mirrors the Golf's, with a choice of petrol, diesel, mild hybrid or plug-in hybrid powertrains.

The diesel range is less extensive than before - the 2.0TDI is available with 115 or 150hp. Finally, there is a plug-in hybrid that combines a 1.4-litre petrol engine with an electric motor and a 13kWh battery for 204hp and a pure electric range of 38 miles.

There will be no pure electric version, as Seat will later launch the El-Born EV as a standalone model with its own design and identity.

The design of the new Leon is updated to Seat's new house style, with a longer bonnet and headlights that are set further back. It's 86mm longer, with a 50mm longer wheelbase, resulting in 49mm more rear legroom.

Inside, screens are the order of the day, with a choice between an 8in and a 10in central screen with touch controls for the climate control and lights, and an optional 10in driver display. Wireless Apple Carplay and wired Android Auto are supported.

Seat claims the new Leon is its most connected to date, with more entertainment and safety features than ever, such as 'Car2X connectivity', which allows cars to communicate with their surroundings to spot hazards earlier.

The new Leon can be specified with one of six equipment grades. Speccing a car will be easier than before, as only the equipment grade, engine and colour can be chosen, with no individual options available other than a panoramic sunroof and a tow hook.

The range starts with the SE, while SE Dynamic adds some essentials. Further up the range, there is a choice between the sporty FR and the more luxury-oriented Xcellence. FR Plus and Xcellence Lux top the range.