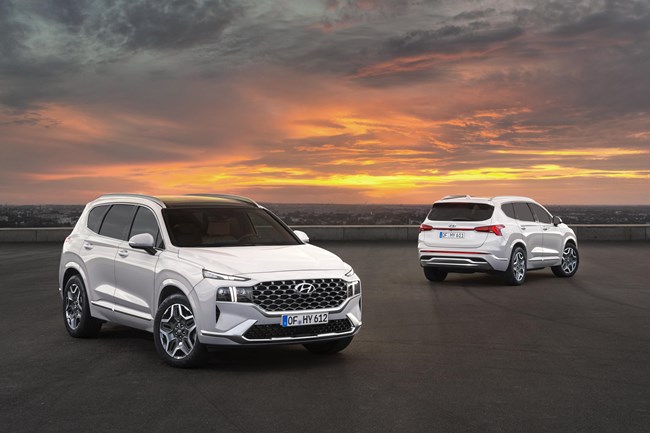 Hyundai has presented a major update to its large SUV, the Santa Fe. Available from September, it will feature hybrid tech and a new platform shared with the Kia Sorento.

The new Santa Fe will use new underpinnings that will allow it to use the hybrid powertrains presented in the Kia Sorento sister model. However, the body and interior are fundamentally the same as the current model, with some updates.

Although Hyundai hasn't announced any engine specifics, it's a safe bet that it will get the same engines as the Sorento, a 202hp 2.2-litre diesel with an eight-speed automatic gearbox, and a full hybrid with a 1.6-litre petrol engine and a small battery. A plug-in version will follow too.

Visually, there is a different front-end treatment with a large mesh grille, T-shaped LED daytime running lights and new air inlets for improved aerodynamics. At the rear, the lights have been subtly re-styled and are connected by a horizontal light bar.

Inside, there is a redesigned centre console, more soft touch materials and a new 10.2in touch screen and a redesigned 12.3in digital driver display. Buttons replace the traditional gear selector for the automatic gearbox, so it's unlikely the manual option will make a return.

The new platform promises to bring improvements in performance, handling, fuel efficiency and safety. This is accomplished with redesigned suspension, lower weight, a lower centre of gravity, and improved sound insulation.