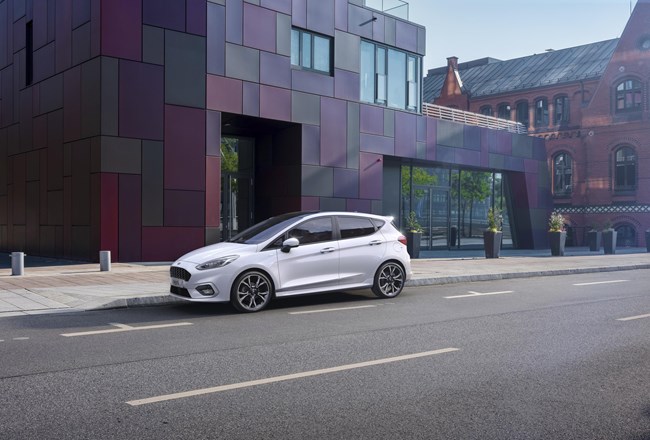 As before, every petrol engine in the Fiesta range (save for the Fiesta ST hot hatch) is a 1.0-litre three-cylinder. The 95 and 125hp non-hybrid versions remain, but the 140hp non-hybrid is replaced by a 155hp mild hybrid version. The 125hp version is also available as a mild hybrid. The 1.5-litre diesel with 85hp continues unchanged.

There are also some changes for those after an automatic gearbox: The 100hp model, which was exclusively available with a six-speed automatic, has been axed. Instead, the 125hp non-hybrid Fiesta now gets a seven-speed dual-clutch auto as standard. Although it's still less efficient than the manual versions, Ford claims a 15% improvement over the outgoing version.

Ford is also introducing a couple of other minor updates on the Fiesta. It is introducing adaptive cruise control, which on the automatic also includes stop & go - which allows the car to bring itself to a complete stop and set off again on its own if it has been stopped for less than three seconds.

The Sync 3 infotainment system is getting a software update to make it more intuitive. This includes making the touch screen buttons larger.

Furthermore, the Fiesta Active (which has a higher ride height and a more adventurous appearance) now features more driving modes, the Active and ST-Line get automatic parallel parking and the space usage of the optional B&O sound system has been improved to make room for an optional spare wheel. Finally, the cross-traffic alert system can now apply the brakes to avoid a collision.