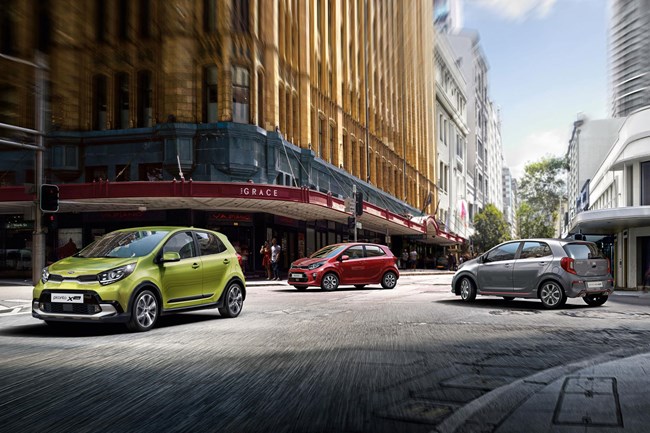 Set to go on sale in the final quarter of this year, Kia's smallest car gets re-styled bumpers and lights, as well as a number of new safety features, including collision avoidance, blind spot assistance and lane keep assist.

The biggest change is to the engine line-up, which now consists of just two versions of Kia and Hyundai's redesigned 'Smartstream' 1.0-litre petrol engine. The naturally-aspirated version produces 67hp, while the turbocharged version produces 100hp. The 1.2-litre four-cylinder which is still available in the Hyundai i10 sister car, appears to have been dropped.

Another change is that Kia will offer an automated manual gearbox as an alternative to the standard five-speed manual. The Picanto used to be available with a rather outdated four-speed automatic, but it's likely that had too much of an impact on efficiency to continue to be offered. Instead, Kia is now offering a five-speed 'AMT' transmission, which is mechanically the same as a manual gearbox, but the clutch operation and gear shifting is taken over by electronics.

It's a technology that these days is almost exclusively found on small, inexpensive cars (and certain Lamborghinis) and when we tried it in the Hyundai i10 (which uses the same powertrains as the Picanto), we found it to be hesitant and unintuitive, and to be avoided unless a manual is out of the question.

Inside, there is a larger, 8in infotainment screen, and a range of new upholstery and customisation options.

Prices and fuel consumption and emission data will be announced closer to the launch date. It's also worth noting that Kia is one of the few manufacturers that offer a seven-year, 100,000-mile warranty.

As before, the Picanto is also available as a sporty GT-Line and as an X-Line, which adds a higher ride height and some off-road-themed detailing.