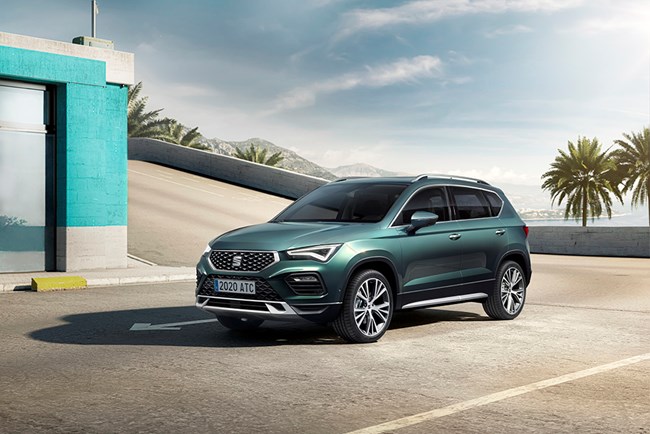 Seat has facelifted its mid-size SUV, the Ateca, bringing the design in line with the new Leon and adding the latest infotainment and safety systems, and RDE2-compliant diesels.

The Ateca has been around since 2016 and has been a resounding success for Seat, cashing in on the trend for SUVs. The facelifted version gets styling that gives it the Seat family face previously seen on the larger Tarraco SUV and the Leon hatchback.

The engine line-up is brought up to date as well. Gone are the 1.6-litre diesel and the 190hp diesel. In their place come a new entry-level petrol and a range of RDE2-compliant 2.0-litre diesels.

The RDE2-compliant diesel range is made up of four versions of the 2.0-litre. The base 115hp version has a manual gearbox only, while the 150hp can be had with a manual or a DSG auto, or as a DSG and all-wheel drive.

Inside, the Ateca gets the VW Group's latest infotainment system which eliminates physical buttons and is controlled through a touch screen that measures 8.25in on the SE equipment grade, or 9.2in on SE Technology upwards. The bigger system also offers navigation and natural voice control which can be awakened by saying "Hola Hola".

The safety systems get an upgrade, too, including side and exit assist and front assist with pre-crash braking and Predictive Adaptive Cruise Control. The latter uses GPS data to make the semi-autonomous features smoother and safer.

The Ateca range still starts with SE and SE Technology equipment grades. The sporty FR and FR Sport grades return too, however, the luxury-focussed Xcellence is replaced by Xperience, which adds robust, off-road themed details to the car. There is also an Xperience Lux grade, which adds even more equipment.

The Xperience grades feature a new all-weather heated windscreen, coated in an invisible 'Climacoat' layer, which allows the windscreen to be defrosted almost instantly.