Toyota Corolla to be trialled with police forces 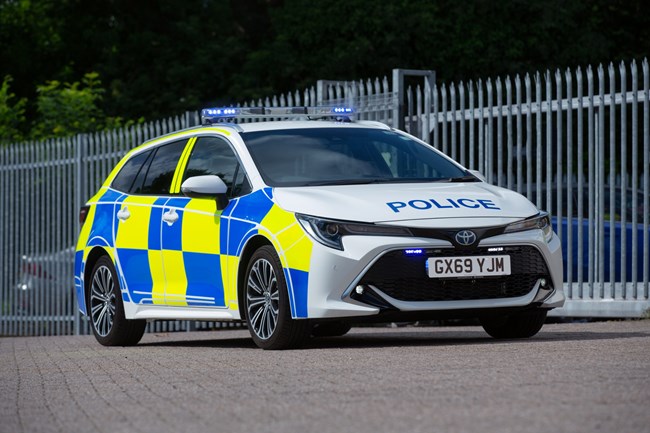 Toyota is sending out an example of its Corolla lower-medium car for a series of month-long demonstration loans with UK police forces.

The vehicle, a Touring Sports estate model in the Excel equipment grade, has been fitted out to police spec with chequered livery and a roof light bar.

It's powered by a 2.0-litre petrol hybrid powertrain, which Toyota says offers benefits from low CO2 emissions and strong fuel economy, while also being able to run on electric power alone in urban areas for short periods.

Toyota and Lexus fleet general manager Stuart Ferma said: "The loan programme, supported by our public sector fleet specialists, will demonstrate the performance and practicality benefits of the Corolla hybrid, and how it can help police forces reduce their fleet emissions with tried-and-tested technology.

"As a hybrid, it also provides more flexible performance compared to an all-electric vehicle and doesn't require recharging facilities."

Recent Toyota emergency services fleet deals have included the Rav4 hybrid being used as a rapid response vehicle by the Welsh ambulance service, and the Land Cruiser being used by police and for highway maintenance.

The Hilux pick-up has been used by HM Coastguard and mountain rescue teams, and 11 hydrogen-powered Mirais are being used by the Metropolitan Police.