There's been a C4 révolution at Citroen. The C4 Cactus is on its way out, with a C-Segment crossover taking its place in the form of the new C4 and all-electric Ë-C4. 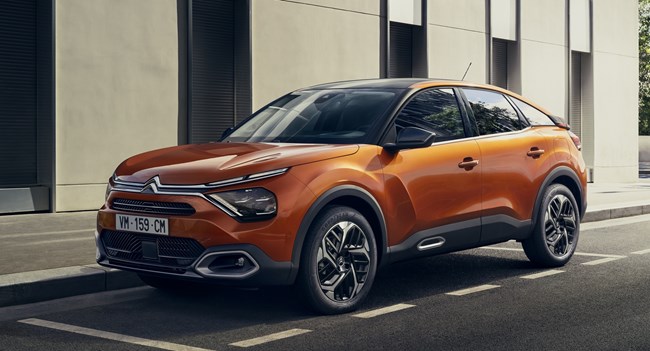 With the new C4, Citroën combines the sloping sleekness of a coupe - with designer Pierre Leclercq also citing the old Citroën CX and GS as inspiration - with the chunky bodywork of an SUV. What we get is a smart-looking C-Segment crossover, or as Citroën puts it, a "disruptive silhouette". And we think this coupe, SUV mash-up looks great. At 4,360mm in length, it's slightly longer than the Peugeot 2008 and Vauxhall Mokka, with which it shares a platform. It also sits higher than the outgoing C4 Cactus.

The new C4 borrows design cues from both the new C3 and C5 Aircross, with wrap-around chrome headlights sprawling from the chevron badge on the nose, and deep indents on its bonnet and flanks. Its design certainly looks more calculated and debonnaire than the maverick C4 Cactus, a car that seems to have ultimately acted as a case study for Citroen to determine its design direction. Put it this way, if the Cactus turned things up to 11 in the quirkiness department, we'd say the new C4 sits comfortably around the seven or eight mark. 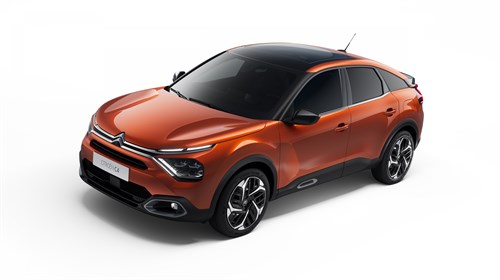 The headline grabber in the new C4 range is the all-electric Ë-C4 variant - an addition that puts it squarely in the crosshairs of the Nissan Leaf and Hyundai Ioniq Electric, as well as the entry-level Volkswagen ID3.

Propelling the new Ë-C4 is a 136hp electric motor, powered by a 50kWh battery (the same battery used in the Peugeot E-208 and Vauxhall Corsa-E). Citroen claims that this powertrain offers a WLTP range of 217 miles from a single charge, a 0-62mph sprint time of 9.7 seconds and a top speed of 93mph. With a 32-amp home wallbox charger, a full charge can be achieved in around 7.5 hours (or around five hours when using the optional 11 kW charger), with 100kW public fast-charging units capable of achieving an 80% charge in just 30 minutes.

Aside to the electric Ë-C4, the new C4 range also comes with petrol and diesel offerings. Petrol options will include three 1.2-litre three-cylinder variants, to include the Puretech 100, Puretech 130 and Puretech 155, with the latter two available with an eight-speed automatic transmission. The diesel picks include two four-cylinder units - the BlueHDi 110 and BlueHDi 130, which are offered with six-speed manual and eight-speed automatic transmissions respectively.

There are currently no plans to introduce hybrid or plug-in hybrid variants to the new C4 range, but we wouldn't be surprised if they were announced next year following its initial launch. 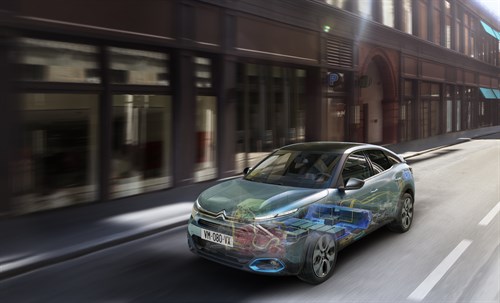 Citroën has put a huge emphasis on comfort with the new C4, both in terms of space and equipment, stating that it wants it to be the "most comfortable car in its segment." The cabin appears roomy, and typically minimalistic, the second row of seats offers best knee clearance in class and it offers decent boot space of up to 1,250 litres (380 litres with the seats in place). The boot also has a false floor, handy if you want to store the Ë-C4's charging cable. There's a distinctive amount of personalisation too, with six different interior colour schemes to choose from to go alongside its seven exterior paint jobs, five exterior colour packs and wide range of alloy wheel options. 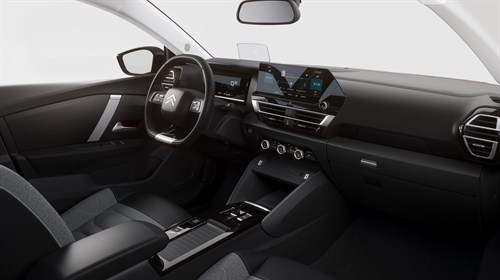 The new C4 doesn't disappoint on the tech front, with things like a 10-inch touchscreen, a head-up display, wireless phone charging and integrated dash cam all available. The two big talking points however are its comfort-orientated Smart Pad Support and the incorporation of Citroën's extra spongy Advanced Comfort seats (as seen in the C4 Cactus and C5 Aircross). The Smart Pad Support system is a first on any Citroën model and features a retractable tablet device holder built into the dashboard on the passenger's side. Citroën ensures us that passenger airbag deployment is not compromised here.

Citroën's Progressive Hydraulic Cushions suspension system is also featured in the new C4 (again, as featured in C4 Cactus and C5 Aircross). Fitted as standard to all C4 models, this system offers advanced shock absorption over bumps to enhance comfort. And the Ë-C4 aims to offer even more blissful cruising with noise and vibration-reducing 'Crosslight' alloy wheels. 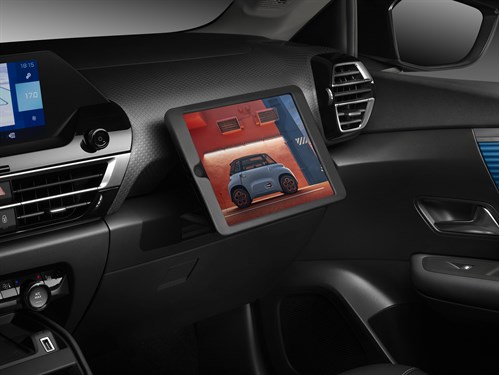 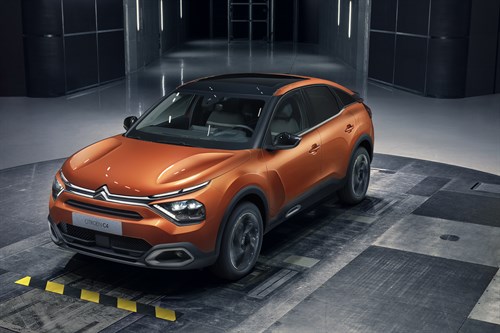 Exact specification and pricing details have not yet been confirmed, but Citroen has said that affordability is a "key ambition", with the brand wanting to make all-electric ownership more accessible.

Given its far-reaching hatchback and SUV appeal, and therefore wide-variety of rivals, you can expect the Ë-C4 to be priced just above £30,000, with entry-level petrol variants coming in at around £22,500. Orders for the new C4 and Ë-C4 will open this summer, with first deliveries expected towards the end of 2020. 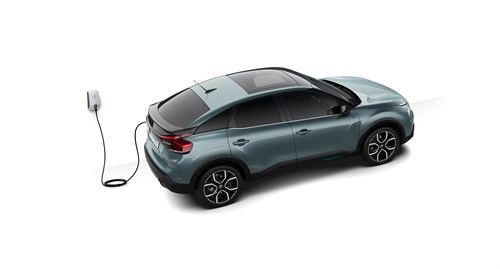