Audi shows fourth generation of A3 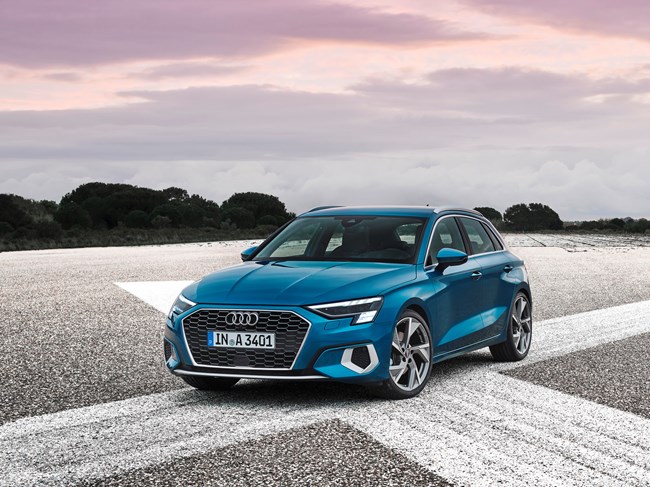 The new Audi A3 has been unveiled with fresh styling, the latest infotainment, one petrol and one diesel engine, and a starting price of £24,900.

With the outgoing version of Audi's A3 hatchback having been on the market since 2012, the time has come for an all-new generation. The exterior looks follow Audi's latest angular styling direction, and initially, it will only be available as a five-door. There is no three-door version planned, nor a convertible. However, a four-door saloon version is due later this year.

Most of the technical specification - from the engines to the infotainment and the interior features - is familiar reading, as we've seen most of it in the VW Golf, Skoda Octavia and Seat Leon, all of which the A3 shares a platform with. Having said that, the A3 is usually the most expensive of the four, so it tends to come only with the more powerful engines and higher spec.

For its fourth generation, the A3 has grown a fair bit. It's three centimetres longer than before, at 4.34m. It's also wider, which is good for interior space, but less ideal on increasingly crowded streets. The boot holds 380 litres, while the wheelbase remains unchanged at 2.64m.

The interior features a 10.1in touch display as standard, which is integrated into the dashboard, rather than sitting on top of it. It also comes as standard with digital gauges, which can be upgraded to a bigger, 12.3 in, version as an option. A head-up display that projects info onto the windscreen is also an option.

The 'MMI' infotainment promises to be faster than its predecessor, thanks to more processing power. It can also store up to six user profiles, which preset the climate control, the seat position, frequently-used navigation destinations and more. The navigation itself uses Google Earth to offer detailed satellite images. Like the Golf and Leon, the A3 also has Car2X capability, which theoretically allows it to communicate with other cars, as well as infrastructure, about hazards and traffic.

The engine line-up offers just two choices to start with, but expect the most of the line-up of engines we've previously seen in the VW Golf - including the mild and plug-in hybrids - to become gradually available.

From launch, there will be one petrol engine - a 1.5 with 150hp - and one TDI diesel - a 2.0-litre with 150hp. A 115hp diesel is available in other European markets, but won't be offered in the UK, at least not initially. A mild hybrid version of the petrol engine, which can contribute up to 12hp, will become available soon after launch. All launch cars will have front-wheel drive, and petrol always has a six-speed manual gearbox, while the diesel always has a seven-speed dual-clutch automatic.

Audi A3s with less than 150hp will get a torsion beam rear axle, while more powerful versions get a multilink. The latter is more sophisticated and tends to offer better ride quality. Customers will be able to choose from an array of alloy wheels between 16in and 19in.

Orders for the new Audi A3 open in March, with the first deliveries expected in May. A petrol with the base 'Technik' equipment grade will cost from £24,900 (OTR). The diesel carries a £3450 premium. This can be upgraded with Sport, S Line, Edition 1 and Vorsprung equipment grades, which all add bigger wheels and more equipment.