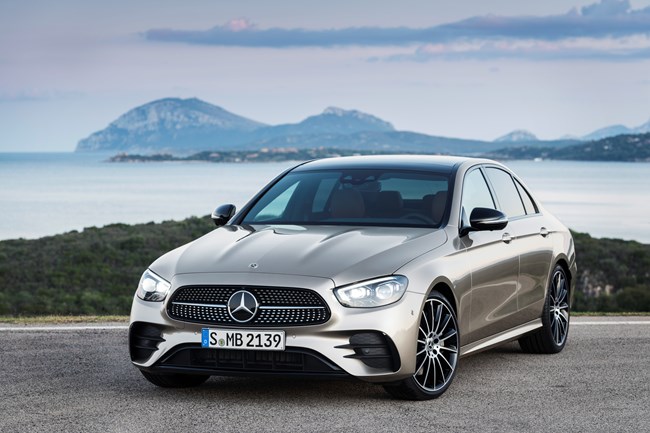 Mercedes-Benz has pulled the virtual covers off the facelifted E-Class. It gets a lot more tech features as standard, there's a new mild hybrid 2.0-litre petrol engine, and more versions of the plug-in hybrid models.

The facelifted E-Class, Mercedes's large executive saloon and estate, was supposed to be launched at the Geneva Motor Show, but as the event was cancelled, it did the unveil online.

Visually, the E-class is brought into line with the brand's latest styling direction, as seen on the GT saloon and the A-Class family. Most notable are the restyled headlights, which are now full-LED as standard, with matrix LED units an option.

As before, it's available as a saloon, an estate, or an 'All-Terrain' estate with a higher ride height and more rugged-looking styling. The refreshed coupé and cabriolet will be announced later.

Inside, it loses the standard analogue gauges. Instead, it always has two screens next to each other - 2x 10.25in as standard, or 2x 12.3in with the optional 'widescreen cockpit'. The MBUX infotainment system will also come with a voice control 'assistant' as standard.

The new E-Class also gains a raft of advanced safety features, such as adaptive cruise control with route-based speed adjustment, while the semi-autonomous motorway driving features and the parking camera system have been improved.

Powertrain-wise, we'll see most of the same ones as before, but there's a new 2.0-litre petrol engine with 268hp and a 48V mild hybrid system that adds up to 20hp. The six-cylinder petrol engines are now Mercedes's new inline six with mild hybrid assistance, rather than the old V6. Finally, the plug-in hybrid E300e and E300de models both become available in both saloon and estate bodies and with both rear- and all-wheel drive.

The refreshed E-Class will go on sale in May, with the first deliveries expected in summer.