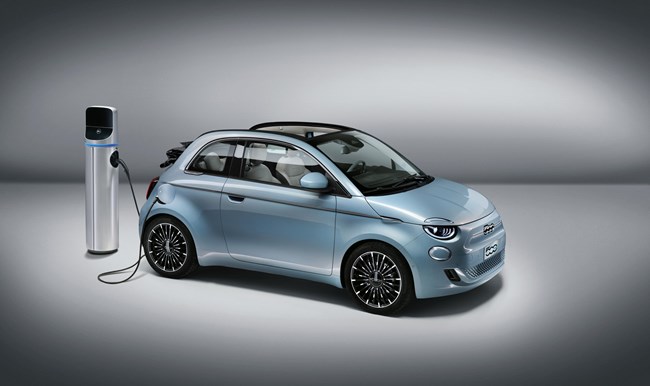 Fiat has reinvented its iconic 500 city car as an all-electric model with a range of almost 200 miles.

Although the new 500 looks very similar to the old one (which is still on sale with a mild hybrid petrol engine), Fiat claims it is all new, with more interior space and technology.

It features a 42kWh battery and a 116hp electric motor, giving it a WLTP range of 199 miles. Although it's less powerful than the other retro-modern electric cars on the market, it offers usefully more range than the Mini electric and Honda e.

Whether it can compete on price remains to be seen, as Fiat has only announced the price of the very high-spec launch model 'La Prima', which costs £32,500 (OTR), or £29,000 with the government plug-in grant.

The launch edition will include a Bluetooth-equipped home wallbox charger, although it can only manage 3kW. An upgraded unit that can charge at the usual 7.4kW is available as well. The 500 comes with cables for both home and public charging, and can rapid charge at up to 85kW, which can top up the battery to 80% in 35 minutes.

The electric 500 is initially launched as a convertible, but a regular hard-top will follow later. The exterior dimensions have grown quite considerably, which is rather disappointing for a vehicle billed as a city car. It's 6cm wider and 6cm longer, with a 2cm-longer wheelbase. That said, it's still a small car.

It also benefits from a lot more tech. Inside, it gets a 10.3in touch screen (cheaper versions are likely to get a smaller version) with a new version of Fiat-Chrysler's UConnect software, as well as wireless Apple CarPlay and Android Auto. The driver gets a 7in digital gauge cluster. There's also adaptive cruise control, an array of cameras, lane keep assist and blind spot monitoring.