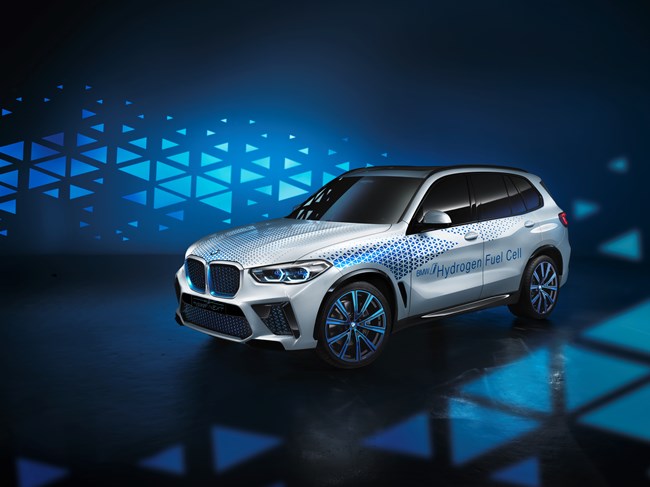 The i Hydrogen Next will be going into small-series production as a hydrogen-powered pilot project from BMW.

The car will be based on the current X5 large SUV in 2020, featuring both a normal battery pack like an electric car, as well as a hydrogen fuel cell which can generate up to 125kW of electric power. Together they power a 374hp electric motor.

The motor normally runs on the electricity generated by the hydrogen fuel cell, but for bursts of heavy acceleration, the battery pack can support the fuel cell to supply peak power.

It has a pair of 700 bar tanks that, together, can hold six kilograms of hydrogen, annd can be refuelled in three to four minutes.

The BMW i Hydrogen Next is developed together with Toyota, which has been marketing the Mirai hydrogen fuel cell car for a number of years. Although that can be bought like a regular car, its price of over £60,000 and the limited refuelling infrastructure limit its appeal, also making it little more than an extended pilot project.

BMW board member Klaus Fröhlich commented: "We are convinced that various alternative powertrain systems will exist alongside one another in future, as there is no single solution that addresses the full spectrum of customers' mobility requirements worldwide. The hydrogen fuel cell technology could quite feasibly become the fourth pillar of our powertrain portfolio in the long term.

"In our view, hydrogen as energy carrier must first be produced in sufficient quantities at a competitive price using green electricity. Hydrogen will then be used primarily in applications that cannot be directly electrified, such as long-distance heavy-duty transport"