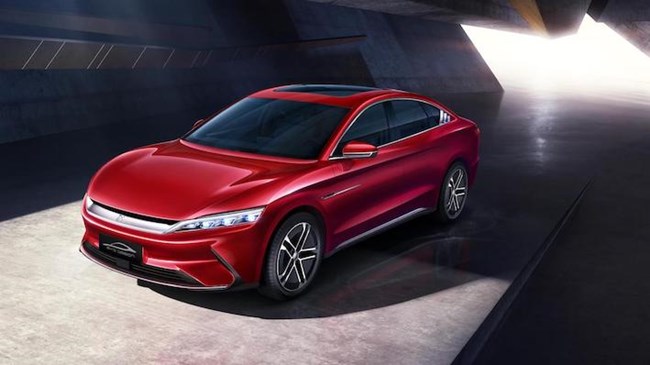 BYD is planning to launch a new electric car in Europe, aimed at drivers choosing cars such as the Audi A6 and Mercedes-Benz E-Class.

The BYD Han will accelerate from 0-62mph in 3.9 seconds, but so far, the company will only quote NEDC range for its battery, at 376 miles.

We contacted BYD to ask whether it was prepared to publish a WLTP figure for range at this stage, but 24 hours later, we've had no response.

It will be launched in China late in June, so expect to see the car introduced in Europe in 2021.

The next part of the release made even less sense.

"While BYD has pursued the tradition of naming its passenger cars after Chinese dynasties, the Han EV has been conceived, designed and manufactured to the standards more in tune with Luxury European cars."

We can't remember any Han dynasties in Europe from my history lessons, unless its an abbreviation for the House of Hanover.

Anyway, BYD already has a presence in the UK from supplying city-based car clubs with EVs, starting in 2013.

But things have moved on since then. The release states: "The R&D team for the Han EV comprises a wealth of high-profile executives from legacy European manufacturers, including BYD's global design director, Wolfgang Egger, whose expertise in creating highly desirable cars for the European market is evident in BYD's latest luxury saloon.

"Its use of the ultra-safe Blade Battery, as well as BYD's in-house pure electric platform, body structure design, eco-friendly materials and safety systems make the Han EV the safest electric car currently on the market.

"We believe that the Han EV combines the best of Eastern wisdom and Western aesthetics," he said, "and will fulfil the growing overseas market for a high performance, long-range and ultra-safe electric car. In the longer term, we are also looking forward to seeing the Han EV making a positive impact in other markets around the world."

"The curved front-end and day-time running lights evoke the shape of a traditional Chinese dragon's face, combining style and functionality."

There was other design commentary in the release, but you can look at the photo of the car for yourselves.