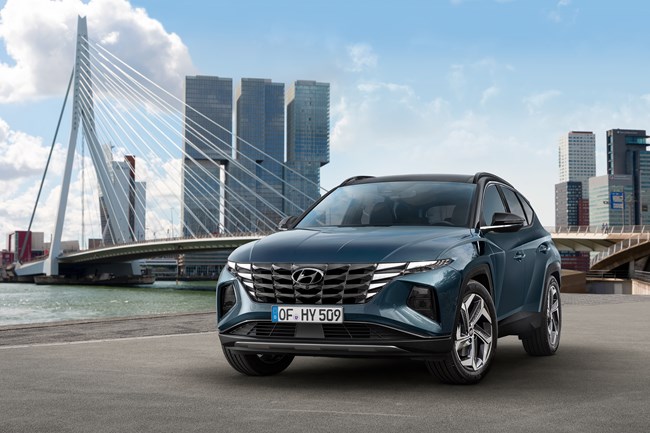 Hyundai has unveiled the new, fourth-generation version of its Tucson SUV.

The firm says the model's styling has been influenced by the Vision T concept car, and features geometric patterns described as 'parametric jewels', particularly on the front grille, which blends into the headlights.

Compared with the outgoing car, the new Tucson is 20mm longer, 15mm wider and has a 10mm longer wheelbase.

Hyundai says this means more space inside, including 26mm of extra rear legroom, while boot capacity is increased by between 33 and 107 litres depending on spec, with a maximum of 620 litres available with the rear seats up.

The interior features a 10.25in touchscreen said to control all major vehicle functions, including the ventilation and air conditioning system, and it sits alongside a 10.25in driver information display.

Along with petrol and diesel engines, a range of electrified powertrain options will be available, including conventional hybrid, plug-in hybrid and mild hybrids.

The hybrid, available with two-wheel drive or four-wheel drive, will feature a 1.6-litre petrol engine and a 44.2kW electric motor, with a combined output of 230hp.

Three 48V mild hybrid options are on offer - 1.6-litre petrols with 150hp and 180hp, and a 136hp diesel, with the latter two both featuring optional four-wheel drive.

Conventional engines are a 150hp petrol and a 115hp diesel.

Available safety systems include an updated autonomous emergency braking system, which can now apply the brakes to avoid oncoming traffic when turning at junctions, while other driver assist systems allow the car to stay in its lane on motorways, maintaining its distance to other vehicles in front, and adjust its speed for upcoming road features based on local road information.

A braking function has also been applied to the blind spot assist, and a blind spot monitor replaces part of the driver information display with a camera view of the next lane when manoeuvring.

Hyundai also claims the new Tucson features a sector-first in the form of a centre side airbag, to prevent front seat passengers from colliding with each other.

The new Tucson will arrive in European showrooms towards the end of this year, with the plug-in hybrid version following next year. UK specs and prices are yet to be announced.