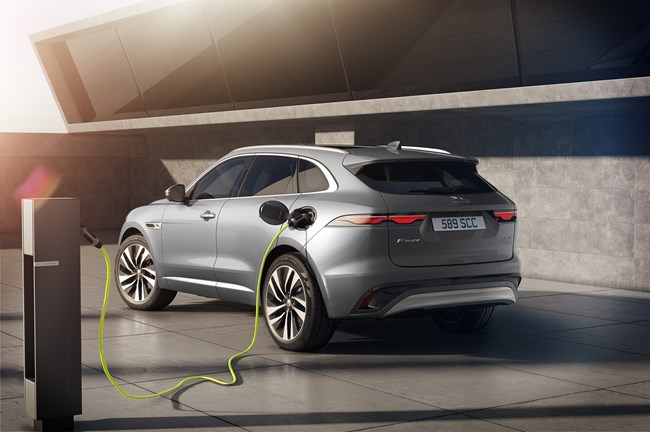 Jaguar has revealed a facelifted version of its F-Pace SUV, with plug-in hybrid and mild hybrid powertrains joining the range.

The PHEV features a 2.0-litre petrol engine and a 105kW electric motor, producing a combined 404hp. On the WLTP cycle, CO2 emissions are from 49g/km, and fuel economy is up to 130.2mpg, while an electric driving range of up to 33 miles is possible.

There are a total of four mild hybrids - 163hp, 204hp and 300hp diesels, and a 400hp petrol - and there's also a conventional 250hp petrol engine. All feature eight-speed automatic transmission, and all-wheel drive.

Away from the powertrains, the major update is to the F-Pace's interior, where there is a new 11.4in curved HD touchscreen running Jaguar Land Rover's latest Pivi Pro infotainment system, and a new 12.3in driver information display, along with a redesigned centre console and dashboard, all finished in new materials.

The updated F-Pace can also receive over-the-air software updates, allowing the latest vehicle systems and infotainment to be installed seamlessly.

There's also a new active road noise cancellation system, which monitors vibrations from the road surface and calculates the opposite phase sound wave needed to remove the noise heard by the occupants, and a cabin air ionisation system with filters to capture ultra-fine particles and improve air quality.

The facelifted F-Pace is available to order now. Range prices for the updated F-Pace start at £40,860, for a 163hp diesel mild hybrid model in core spec, and rise to £64,990 for a 400hp petrol mild hybrid R-Dynamic HSE.

Plug-in hybrid deliveries will begin in early spring next year.