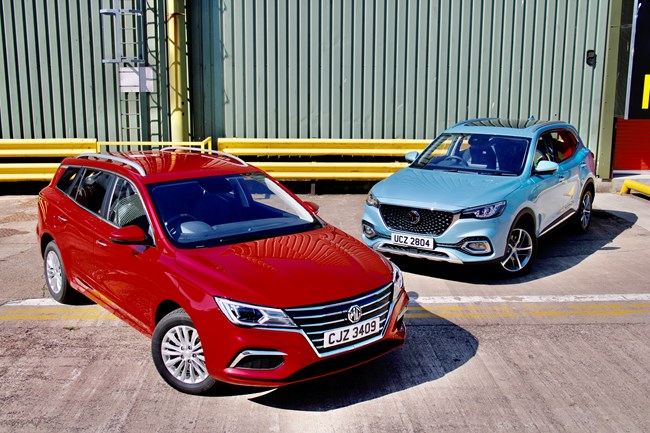 MG has added two new electrified cars to its range - the fully-electric MG5 EV, and a plug-in hybrid version of the MG HS.

The MG5 EV is powered by a 156hp electric motor, and has a 52.2kWh battery pack with a range of 214 miles on a WLTP combined cycle.

The battery pack can be recharged from 0-80% in 50 minutes using a rapid charger, or fully recharged in around eight-and-a-half hours using a Type 2 home charger.

The EV features an estate bodystyle, offering 464 litres of boot space with the load cover in place.

Two equipment grades are available - Excite and Exclusive - and prices, including the government's plug-in car grant, start at £24,495.

The plug-in hybrid version of the HS SUV, badged Plug-In, pairs a 1.5-litre petrol engine with an electric motor for a combined output of 258hp.

The wheels are driven by what MG describes as a 10-speed transmission, featuring a six-speed automatic gearbox and a four-speed electronic drive unit.

An electric driving range of up to 32 miles is claimed, along with CO2 emissions of 43g/km.

The same two equipment grades are available as with the MG5, and prices for the HS Plug-In start at £29,995.