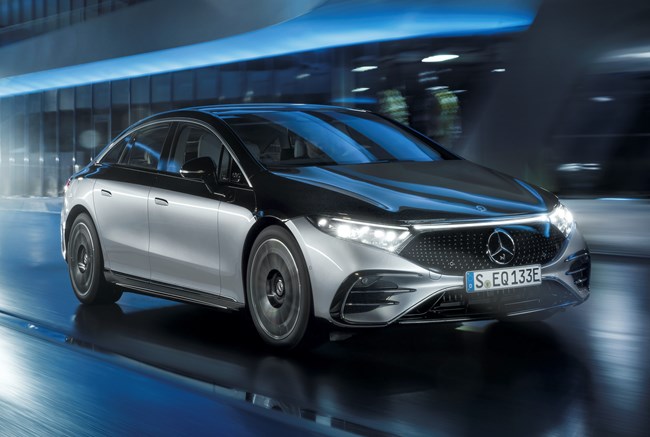 Mercedes-Benz has revealed the EQS, a new flagship luxury saloon for its EV range.

The model will launch in the UK with a 333hp electric motor, paired with a 107.8kWh battery, which Mercedes says is expected to allow a range of up to 478 miles on the WLTP cycle.

Mercedes says this marks the launch of a new generation of its batteries with significantly higher energy density, while the EQS is the first car to be built on a new platform for executive and luxury EVs.

Mercedes says the EQS has been designed to maximise aerodynamic efficiency, and claims its 0.202 drag coefficient figure will make it the most aerodynamic production car in the world.

The EQS also features up to 290kW of recuperation power when decelerating, allowing the car to be brought to a standstill without using the brake pedal.

The car's interior features a 'Hyperscreen' - a curved display running almost the full width of the dashboard, with three screens appearing to blend into one.

These screens can show driving information to the driver while showing entertainment to the passenger - Mercedes says a camera will detect if the driver is looking at the wrong screen and dim that display accordingly.

The infotainment system will also feature a new function showing whether the current battery level is enough to return to a journey's starting point without charging.

The EQS will also be the first Mercedes capable of receiving completely new vehicle functions via over-the-air updates.

Among the car's assistance features will be remote park assist, allowing the driver to park and unpark the car via smartphone - Mercedes says this will lead on to technology where the car can head off and park itself in a connected car park, legislation permitting.

The EQS is due to go on sale in late summer, with the first UK deliveries at the end of the year. Full specs and prices are yet to be announced.